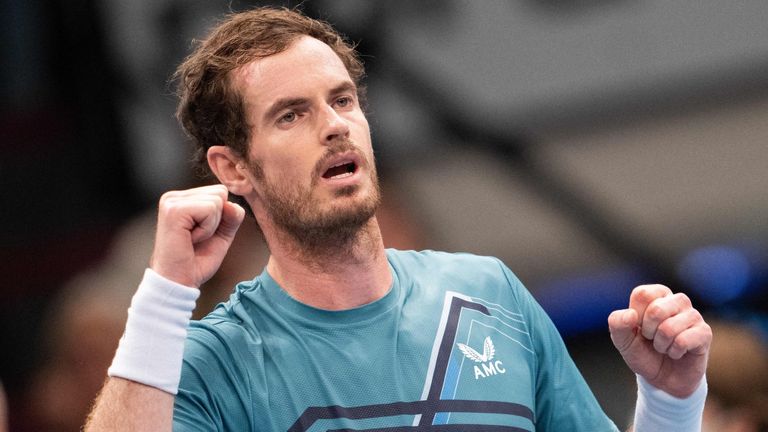 Andy Murray remains perfect at the Erste Bank Open in Vienna as he defeats Poland’s world No 10 Hubert Hurkacz in three gruelling sets; Spanish teenager Carlos Alcaraz gets the better of Dan Evans to deny an all-British second round clash

Andy Murray got the better of world No 10 Hubert Hurkacz at the third time of asking in 2021 after a gruelling three-set victory in the first round of the Erste Bank Open in Vienna.

Having already lost to the Pole in Cincinnati and Metz this year, the former world No 1 showed how far he has come in recent months with a superb 6-4 6-7 (6-8) 6-3 victory in Austria on Monday.

“It’s a good feeling,” Murray said. “It was obviously a very tight match which could have gone either way. I had some chances in the second set but didn’t get it and then the third set I was obviously a break down and he’s not an easy guy to break, especially indoors.

“Thankfully I managed to get the break back in the next game and from there probably deserved to get over the line. It was a good win in tough circumstances.”

Murray, who said he wanted to be more “clinical and ruthless” when the opportunities arise against the best players, was forced into saving two break point chances in the third game before he made inroads into the Pole’s own serve six games later.

The 34-year-old went on to take his set point chance in which he won 20 out of 25 points on serve.

Hurkacz had Murray on the ropes in the sixth game of the second set, but the Scot fended off four break point opportunities, showing his battling qualities to stay on terms.

He then showed just how much his fitness has improved after chasing down a lost cause before flashing a forehand running passing shot down the line. Hurkacz dug in, though, and upped his level to save two break points for a big hold for 4-3.

The set went all the way and while Murray could not take a match point chance in the tie-break, Hurkacz took his set point to level things up.

Another tough gritty win by Andy. They are mounting up week by week ?

The pair traded early breaks in the deciding set before the three-time Grand Slam champion broke for a 4-2 lead.

And despite a few nerves Murray managed to get over the winning line with an ace on his third match point in two hours and 41 minutes to set up a clash against Carlos Alcaraz.

Speaking about his movement, Murray added: “I think that’s something that with each match I have started to do a little bit better with. A lot of my movement is about anticipation and when you’re not playing many matches like I have in the last few years you’re just not quite reading the play as well.

“Now with each match and each week that I’m playing, I’m starting to see the ball a bit earlier and starting to react a little bit quicker. That means I’m going to chase more balls down and move a little bit better. That’s a huge part of my game. I need it.”

Evans got off to the worst possible start, going 2-0 down after being broken in his first service game and although he got things back level at 2-2 following an immediate break, two more service breaks saw his Spanish opponent take the first set.

The roles were reversed in the second set as world No 24 Evans took an early 2-0 lead but from 3-1 up he lost the next five games to 18-year-old Alcaraz to lose in an hour.

Murray, who defeated Alcaraz at Indian Wells earlier this month, admitted being wary of the talented teenager, saying: “He’s a great young player with a lot of potential. He hits a huge ball from the back of the court. He’s an excellent player and I will need to play another good match if I want to win.”