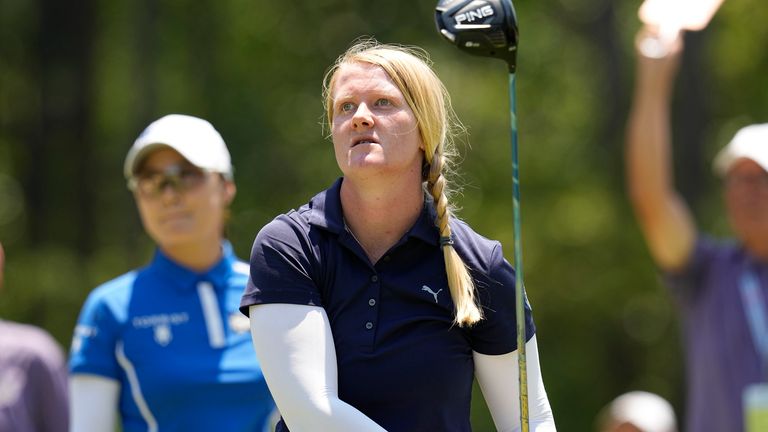 Ingrid Lindblad carded seven birdies and a bogey in opening six-under-par 65, eclipsing previous best of 66; “The green areas were tough. You had to hit the right section of the green to not run off the slopes and everything. It’s a great US Open course”; watch live on Sky Sports

Sweden’s Ingrid Lindblad fired the lowest score by an amateur in US Women’s Open history to set the early clubhouse target on day one at Pine Needles.

Playing alongside her idol Annika Sorenstam, Lindblad carded seven birdies and one bogey in an opening six-under-par 65, eclipsing the previous best of 66 which has been achieved three times, most recently by Gina Kim in 2019.

That gave the 22-year-old a two-shot lead over fellow Swede Anna Nordqvist and Australia’s Minjee Lee, with Americans Lexi Thompson and Ally Ewing on three under.

“I hit a few shots close to the pin and then my putting was great today,” Lindblad said. “Made a few par saves and made a few putts for birdies. It just worked from fairway to green.

“The green areas were tough. You had to hit the right section of the green to not run off the slopes and everything. It’s a great US Open course.”

Asked about playing alongside 10-time major winner Sorenstam, Lindblad added: “I’ve played her tournaments since like 2014. Then when I saw that I’m playing with her I was in shock. I was like, this cannot be true.

“Then on the first tee box I get her scorecard, I’m like, I have Annika’s scorecard in my hands. But it was really cool. We had fun out there. She fist pumped me for a few birdies, and it was fun.”

Sorenstam, who retired at the end of 2008 but returned to competitive golf after turning 50, paid tribute to Lindblad after completing an opening 74.

“She’s really impressive,” Sorenstam said. “She’s authentic. She’s got a special look, but she’s a fearless player. I think she’s confident in her own game. I know she doesn’t shy away from the limelight that maybe I did as a young girl.

Watch the US Women’s Open throughout the week live on Sky Sports.