Life after Zlatan for Sweden? 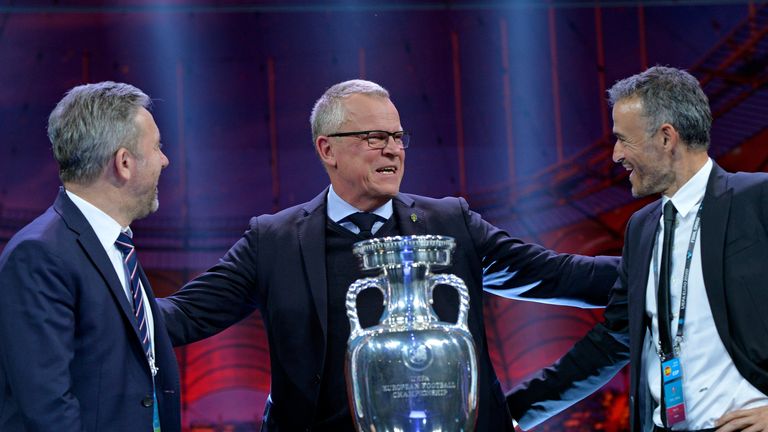 When Zlatan Ibrahimovic described the omission of Dejan Kulusevski from the Sweden starting line-up to play France in September as “an absolute joke” his return to the international arena looked highly unlikely. “More proof that incompetent people in the wrong positions are suffocating Swedish football,” continued Ibrahimovic via Twitter.

It could only be interpreted as a stinging criticism of Janne Andersson, the Sweden coach. And yet, within weeks of those words, the pair were in discussions to end the striker’s international exile.

Ibrahimovic returned from his five-year absence in March.

The subsequent injury to the AC Milan striker robs Sweden of their biggest name and the tournament of one of its more recognisable characters. But Andersson is strengthened by the whole episode.

He was the bigger man. Now he can return to his work – the work that took Sweden to the World Cup quarter-finals in 2018 – knowing that he did all he could. But did he really have no issue recalling someone who had questioned him so publicly?

“There was no problem at all,” Andersson tells Sky Sports.

“For me, I have no prestige in that way. I don’t look back and think, ‘Oh, he said that’. I don’t care. I meet the person. I talk with the person. Either we reach an agreement as we did here, 100 per cent. Or not. Then we can leave it behind us and move on in that way.

Andersson’s pragmatism is illustrated by the process that led to the player’s recall. It was in November, after receiving his prize as the best Swedish player, that Ibrahimovic declared his desire to play for the national team again. That was enough to prompt action.

“He was sometimes teasing that he would come back but that was the first time that he had really said it like that. Before that, he had just been talking but this time he said it like he really meant it.

“I spoke to the general secretary and told him to set up a meeting with Zlatan so we could talk about it. He wanted that too so I went to Milan. We talked about what had happened over the last few years. We put that away and decided to talk about the future.”

It was at the next meeting in February that Andersson really laid out his plans, making a detailed presentation outlining his vision for Ibrahimovic’s role on the pitch and off it.

“I presented to him the idea of how we play, how we work in the national team today. It was like when I was a club coach buying a new player. We needed to explain to him that we work like this. Zlatan was new to our club. In this national team, we work in this way.

“We were in 100 per cent agreement about everything. We had no problems at all. He came in March and he was really good. As a player, of course, in the two games that he played, but also as a person off the pitch, as a leader for the young players. It was perfect.”

That changed when Ibrahimovic succumbed to a knee injury in May. It was a setback for him and for Sweden given that optimism had begun to build. The return of the iconic striker could have been the final piece in the puzzle taking Andersson’s team to new heights.

“At the World Cup, nobody knew anything about us because Zlatan and the other players had finished so we were starting almost from zero. But then we started to build something up and people started to think we were a good team. Today, I think maybe people think too much of us but I cannot do much about it.

“The idea of how we want to play has been the same throughout those five years. How good it depends on how good the players are who we play within the system. I think today we have more players with more qualities than we had two or three years ago.”

Speaking to Andersson, that balance between being ambitious and being realistic is one he strives to get right. He believes in his players but when he talks of the “need to keep the things we were doing well” it is clear that he is keen to manage expectations.

“Now we can play in more different ways but we have to choose the right way to achieve the best results. I think about that a lot.”

Do not expect Sweden to opt for a flamboyant style of play, the sort of expansive game that risks them being exposed defensively. That is not what worked for them at the World Cup and their experiences since then have only convinced Andersson of the need for caution.

A Nations League group that included France, Croatia and Portugal was a huge test. “We learned a lot from those games,” he says.

Not all of the lessons were easy.

“We were a bit naïve,” adds Andersson.

“We tried to play in every part of the pitch. Against Portugal, for example, they just killed us when we did that. When we played against France at home in Stockholm, we had nine shots to their six and more possession than France had but we lost 1-0.

“After the game, we were all in agreement. We cannot play like this against those kind of teams because they are too good and they will kill us. So we have to be smarter. When you are Sweden, you have to work hard on the defence otherwise you get problems.

“We will be hard, compact and difficult to score goals against. We need to have more possession, we need to attack, but we also need to be strong defensively and not lose.

“If you go back to the World Cup, we were really strong on the defence and then we could score on the counter-attack. Now we are able to have more possession than we used to have but we still have to find the right balance to get the best results.”

It is natural that Andersson should hark back to events in Russia in 2018. That summer was a triumph for the 58-year-old coach as he confounded expectations by topping a group that included defending champions Germany, South Korea and Mexico.

Victory over Switzerland in the knockout stages set up a quarter-final with England and while that proved a game too far it still represents Sweden’s best World Cup in six attempts. Andersson was named coach of the year at the Swedish sports awards.

“It was my first tournament so I certainly learned a lot,” he says.

“You have to have a good culture, a good environment, and we had that. We liked to be together for a long time. In 2018, it was 48 days from the start to the finish so the group is so important. How we act, how we behave around one another. It was really good.

“I have the best job in the world.

“I enjoy it but I work really hard and I make others around me work hard. I think that is the only way to have success. Nothing more or less than that. That is what I do. If people like that, great. If they don’t like it, I can do no more.”

Everyone knows where they stand with Andersson. Even Ibrahimovic came to understand that in the end. It is why – even without their star player – it would not be a surprise if Sweden are able to safely negotiate a group that includes Spain, Poland and Slovakia.

“I hope that we go further. That is very important for us. After that, hopefully, we can cause problems for some of the big countries. It just has to be one of those days where everyone is at their top level.