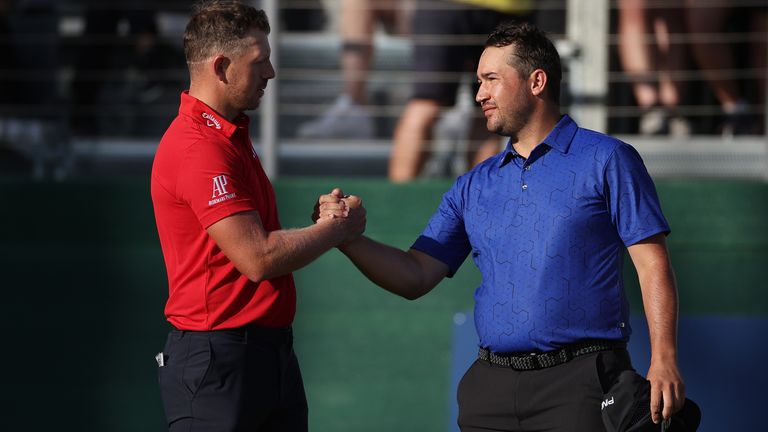 Matt Lawrence is in second place and will be in the final group on Sunday, while Scotland’s Scott Jamieson and England’s Richard Mansell are four shots off the leader; watch the conclusion of the Omega European Masters live on Sunday from midday on Sky Sports Golf

Matt Wallace and two other British players remain in contention at the Omega European Masters as South Africa’s Thriston Lawrence holds a three-shot lead going into the final round at Crans-sur-Sierre Golf Club.

Lawrence, who sits 17-under par for his first three rounds, holds a three-shot lead over Wallace as he bids to claim his second DP World Tour title of the season.

Scotland’s Scott Jamieson and England’s Richard Mansell sit a further shot back in a tie for third on 13 under.

After putting the finishing touches to his second round on Saturday morning after a delay due to thunderstorms on Friday, Lawrence went into the third round one shot off the lead held by Spain’s Alejandro Canizares.

South African Lawrence was the first winner of the DP World Tour era at the Joburg Open in November after that event was reduced to 36 holes.

He said: “I’m happy with the way I played, played very solid, made a few clutch putts here and there.

“I’m confident going into tomorrow, but [there is] a lot of golf to be played, just stick to the process, stick to the game plan and enjoy it.”

Wallace reached the turn in 35 after mixing two birdies with two bogeys before producing some battling par saves on the back nine.

He closed his round with two consecutive birdies to grab outright second spot, and he was pleased with his finish.

“Good finish there, battled hard,” said the four-time DP World Tour winner. “Felt like I let the tournament slip away a bit in the middle, had to dig deep and go into my catalogue of things to calm me down, relax and try to get on with the job.

“I made those two par putts, which were huge on the par fives. I’ve made a couple of eagles and birdies to catch up this week. Didn’t do that and in the end if I had birdied those two par fives and parred the rest I would have been happy, so I’m chuffed.

“I’ve been through a lot. I lost my game middle to end of last year, wasn’t practising. I realised that’s not how I was going to get better, had to sort that out, change a few things in my team. Not blaming them, just needed to change.

“I feel like I’m back. Feel like I’m nearly there and I’ve got different shots. I’m getting a bit emotional about it, but it means everything to me.”

Watch the Omega European Masters throughout the week live on Sky Sports. Live coverage of the final round starts from midday on Sunday on Sky Sports Golf.