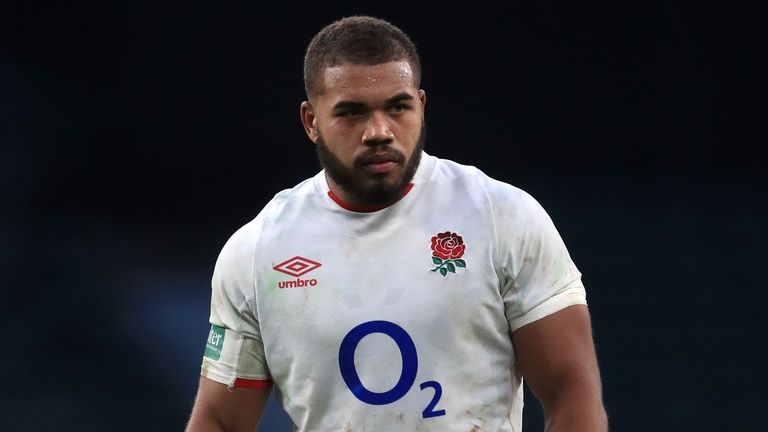 Ollie Lawrence on Manu Tuilagi: “Manu is someone I’ve looked up to since I was a kid. When I was a lot younger I wanted to emulate him because the way he played excited me. That is probably how my game evolved, watching players like him”

Ollie Lawrence says he finds it “flattering” if people want to draw comparison between him and England midfield powerhouse Manu Tuilagi.

England embark on their Six Nations campaign next month without Tuilagi, who is continuing his recovery from a serious Achilles injury.

But in 21-year-old Worcester centre Lawrence, England boss Eddie Jones has a player with similar traits to Tuilagi, given his game-breaking prowess and physical presence.

Lawrence, who was a promising footballer as a child at Aston Villa and Birmingham, made his Test debut off the bench against Italy in October, then started Autumn Nations Cup victories over Georgia and Ireland.

He is a serious contender to make Jones’ line-up when England tackle opening Six Nations opponents Scotland at Twickenham on February 6.

“Manu is someone I’ve looked up to since I was a kid,” Lawrence said.

“When I was a lot younger I wanted to emulate him because the way he played excited me.

“I would watch his game, and watch him. That is probably how my game evolved, watching players like him.

“If people want to compare me to him, that’s their opinion, I am not going to fight them on it. It is not a burden at all. If anything, it’s flattering.

“The biggest thing for me is consistency, having as many big moments in games as possible, getting on the ball as much as possible and just repeating that throughout the 80 minutes.

“It’s about being a consistent seven, eight or nine every week and not dipping below that. I guess that’s what Test rugby is at the end of the day – it’s consistently playing at that top level and staying there.

“The Ireland game [in November] was probably the most intense game I have ever been involved in.

“In terms of physicality and the way the game was played with boys flying off the line and hitting people, it was mind-blowing to be honest with you.”

As a youngster, football and cricket attracted Lawrence, and it was not until his mid-teens he knew rugby union was for him.

Lawrence added: “Football was my first love, I loved playing it, but it was just something I never saw myself being. The environment of being in an academy at such a young age, it wasn’t for me.

“It clicked for me when I was 16. I didn’t really want rugby – cricket was where I saw myself going – then I played rugby for Midlands U15s, and when I played England U16s, professional rugby was the only thing on my mind.”

Lawrence’s attention is now on the Six Nations, with England targeting a successful title defence and more silverware following their Autumn Nations Cup success in December.

“We were happy with the level we were at in the Autumn Nations Cup, but we know we can take it so much further. It’s exciting,” he said.

“Taking confidence from that and moving on to the Six Nations, everyone is going to be ready to go, excited to play.

“We know teams that maybe didn’t perform in the Autumn Nations Cup will be coming back stronger as well, so it’s taking it to the next level now, really pushing on and seeing where we can take it.”