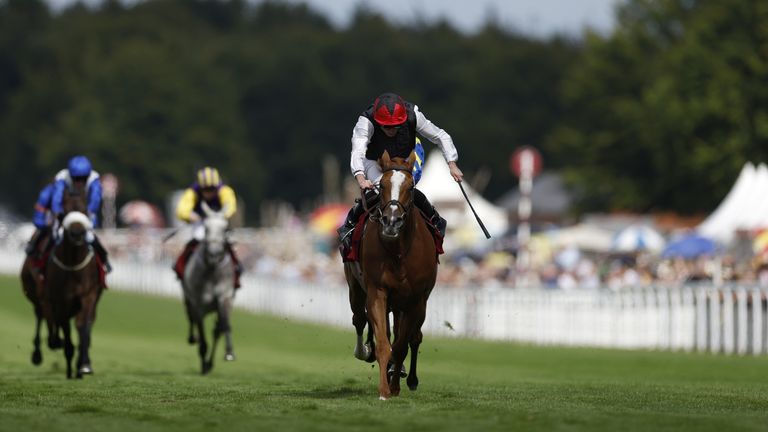 Kyprios landed a pulsating renewal of the Al Shaqab Goodwood Cup from Stradivarius to back up his Ascot Gold Cup victory for Aidan O’Brien and Ryan Moore.

Stradivarius, bidding for a fifth win in the race at the age of eight, went down on his sword having again found a little trouble in running, this time under Andrea Atzeni as Frankie Dettori watched on from the sidelines.

Though he got to the front inside the last furlong, Kyprios (6/4 favourite) kept finding more and got his head back in front in the last 200 yards to hold on for a neck victory.

Trueshan was given the chance to defend his crown by trainer Alan King and the six-year-old ran a bold race in bidding to win back-to-back renewals, finishing a length and a quarter back in third.

Moore holds the winner – who at one stage in his life was seen as a Classic contender – in very high regard.

“Today is only his eighth race and he is only doing what he has to do,” he said. “It was a steadily-run race and he was in front a long way out. He was just waiting. I always feel I’m not going to the bottom of him.

“He is a proper Group One horse and Aidan has always had a lot of belief in the horse. At the start of the year he was saying what he thought he could do, so all credit to him and the team at home for getting him back.”

O’Brien was winning the Goodwood showpiece for the third time, after the victories of Yeats in 2006 and 2008.

“Kyprios is a great horse. Ryan gave him a beautiful ride and he is only ever in the gear that you want him,” said the Ballydoyle handler. “It was great that they all came into the straight. Ryan had Kyprios in a beautiful position and he is a horse that loves a battle.

“He saves everything and is very professional. I’d say there’s a lot more to come. He loves racing, is easy on himself and the plan from here is to go to the Irish St Leger. Kyprios is a lovely horse, a total professional, saves all his energy and there is any amount of improvement in him.

“He has a lot of class, a lot of quality. He has run over two and a half miles at Royal Ascot and two miles today, but we would have had no problem starting him over a mile and a quarter at the start of the year, as he has that real pace. However, you don’t see it as he doesn’t show it unless you really want it. It’s great to have him.”

He added: “Those type of horses are very special when you have a horse who stays like that and has that class.”

Atzeni, who was in the saddle when Stradivarius won in 2017 and 2018, said: “He ran his heart out again, the race went quite smoothly. The horse I went with followed the winner, we went a nice pace and four out Trueshan arrived on my outside, but it was a long way from home and I did not want to get racing early.

“I followed him through and my main challenge in the middle of the track was that the winner just went away from us. Maybe he just got a bit lonely on his own, but he ran to the line as a champion and you can’t take that away from him.”

King, meanwhile, was taking positives from the run of the Hollie Doyle-ridden Trueshan, who is always at his best when there is genuine cut in the ground.

“Not happy not to have won, but it was a hell of a performance,” said the Barbury Castle handler. “It was a proper Goodwood Cup. I think the ground (might have led to the defeat), but I was happy to run and have no regrets. We know he is a better horse on soft, but no disgrace today.”