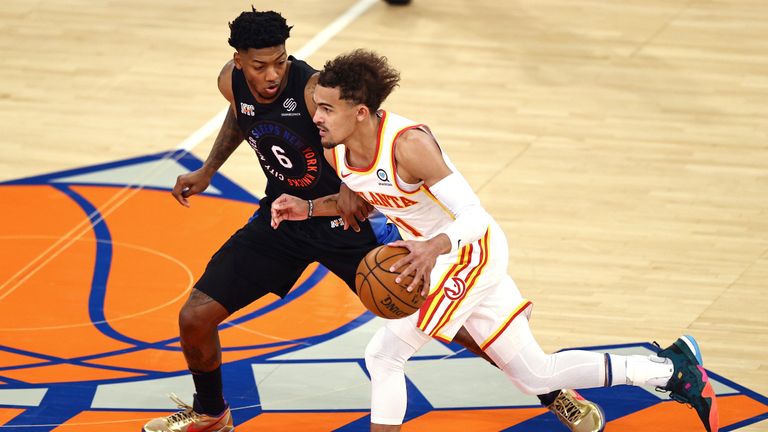 Derrick Rose scored 26 points off the bench to lift the host New York Knicks to a 101-92 victory over the Atlanta Hawks on Wednesday in Game 2 of their Eastern Conference first-round series.

Julius Randle recorded 13 of his 15 points in the third quarter and added 12 rebounds for the Knicks, who erased a 15-point deficit to even the best-of-seven series at one win. Game 3 is on Friday in Atlanta.

Trae Young, who scored 20 of his 30 points in the first half, was serenaded with boos every time he touched the ball. The Madison Square Garden faithful’s response was a result of Young putting his fingers to his lips to silence the crowd following Atlanta’s 107-105 victory in the series opener on Sunday.

De’Andre Hunter and Bogdan Bogdanovic each scored 18 points for the Hawks.

Hunter’s 3-pointer gave Atlanta a 70-58 lead with 6:03 remaining in the third quarter before New York answered with a 23-5 surge. Bullock drained two 3-pointers, Rose and Alec Burks also converted from beyond the arc before Obi Toppin converted an alley-oop with a dunk to cap the run.

Former Knick Danilo Gallinari halted the surge with a 3-pointer, however, Nerlens Noel tipped home a loose rebound to ignite a 7-0 run that gave New York an 88-78 lead with 8:34 to play. Atlanta answered with a 13-3 run to forge a tie, however, Rose made a short hook shot and Bullock sank a 3-pointer to push the Knicks’ advantage to 96-91 with 3:26 to play.

Atlanta missed its next five 3-point attempts and Taj Gibson and Randle each converted from in close to give New York a 100-91 lead with 1:13 to play. The Knicks were not threatened the rest of the way.

Randle recorded his first two points of the game to trim Atlanta’s lead to 45-41 with 4:13 to play in the second quarter. Young, however, answered with a long-range 3-pointer and followed up a pair of Hunter free throws with a reverse layup, a step-back jumper and a 3-pointer to extend the Hawks’ advantage to 57-42.