Jose: I saw togetherness from Spurs 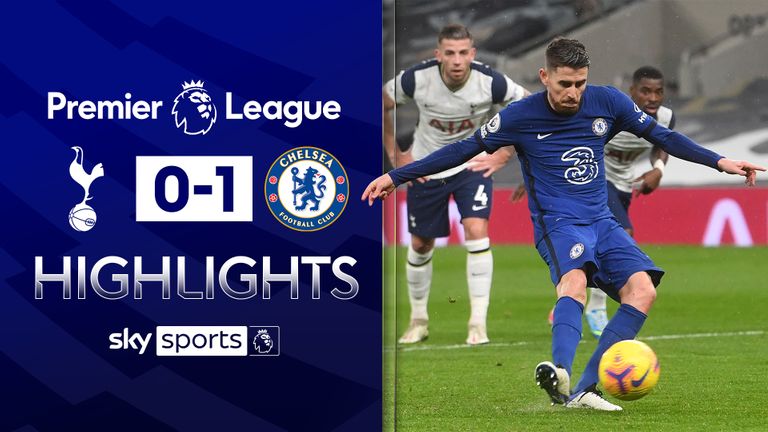 Tottenham boss Jose Mourinho says he can see a spirit in his squad despite suffering a third successive Premier League loss after a 1-0 defeat to Chelsea.

Spurs’ league season is imploding, having been top of the table in mid-December, and they went down to Jorginho’s first-half penalty in north London as Thomas Tuchel’s impressive start to life at Chelsea continued.

Since travelling to Anfield at the summit on December 16 they have lost five of their next nine games, including three in a row for the first time since 2012.

They are suffering with injuries, as attacking threats Harry Kane, Giovani Lo Celso and Dele Alli are ruled out, but Mourinho insists he is seeing a togetherness in his squad.

“We’re trying to go on the search but I saw togetherness. It’s not easy to see togetherness with bad results, defeats, difficulties, injuries,” he said.

“Togetherness is very easy to show when you’re on a high and winning matches, when everything is amazing.

“But in difficult moments it’s more difficult to see that togetherness but I saw that in the second half. No doubts for me.”

Unsurprisingly, the goals have dried up without Kane, who also is the chief provider and the football has been insipid in recent weeks.

“It’s not just what they mean, they mean that we don’t have many options to rotate players and we finish with people with some signs of fatigue because of the accumulation of matches because we don’t have so many players to rest.

“The second thing is confidence. The confidence levels are very, very important to play football. When a team doesn’t have good results, a period when results are not good, you need that click back to go back to normality. So for me it’s a little bit like that.”

“I told him something he knows already. I consider him one of the best referees in the Premier League. I care for him and he is a referee I have big admiration for. That gives me a good position to tell him I did not like his performance.”

Jose on Bale: ‘I am trying my best’

Despite having Gareth Bale on the bench and his side chasing the game in the second half, Mourinho never looked like bringing the Wales international on.

Asked by a TV reporter why he did not come on, he replied: “Good question. You do not deserve to know the answer.”

Quizzed about it again in his press conference, he said: “I am trying my best. Gareth is trying his best. Everyone is trying their best.”

“Spurs would have got booed off the park for that performance. Once at half-time and again at full-time.

“They had a 10-minute spell in the second half where they looked to maybe press, but it was too desperate. When they had the ball there was no plan, no one getting into pockets of space to try and make things happen. It was all lacklustre, trying to get the ball up to Carlos Vinicius, and he wasn’t holding it up.

“It was a really disappointing performance. It looks like they work so hard defensively to keep clean sheets that when they get the ball, they don’t know what they are doing with it when they are going forward. There’s no plan and nothing to their play. There’s no movement or rotation.

“It was really poor and the saving grace for the players out there was that they would have got booed off the pitch had there been fans in the ground.

“Tactically, Spurs were completely outclassed and that’s happened a few times. Brighton and Graham Potter did it at the weekend with a lesser team. You can’t say Chelsea are a better side with a better squad. It’s not been good enough and he needs to address it quickly. He (Jose Mourinho) needs to organise this team, organise the way they are playing, stick with it and get something out of them.

“At the moment, Spurs are miles of Champions League football.”

While Spurs have lost their last three games, Chelsea made it seven points from Tuchel’s first three games in charge.

They have yet to concede a goal, but were almost made to pay for not killing the game as Spurs could have snatched a draw at the end.

“We need to create more clear chances. This is the objective and this is the job for me and I blame nobody.

“But, it is hard to talk the guys into it.

“No, in general everyone wants to score with every half-chance and chance we have. It is not like this in the Premier League so no worries so far.”

What’s next for both sides?

Chelsea are back in action on Sunday when they travel to Sheffield United, live on Sky Sports; kick-off 7.15pm. Meanwhile, Tottenham also play on Sunday. they host West Brom; kick-off 12pm.