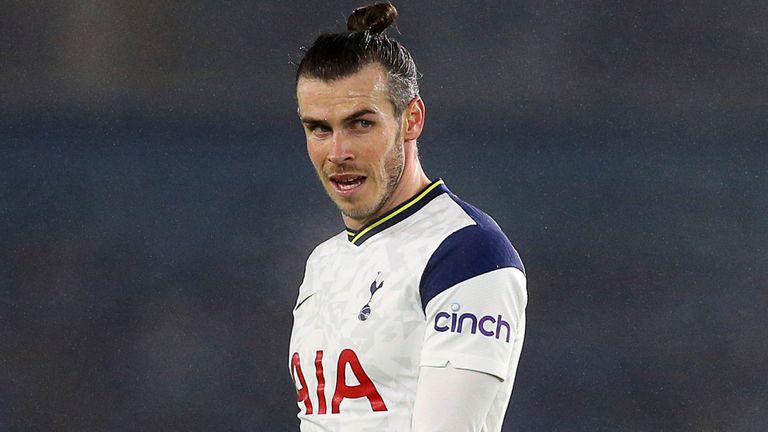 Jose Mourinho admitted he was “hurt” by Tottenham’s defending in the chaotic 5-4 defeat by Everton, and says Gareth Bale’s latest injury issue is a “surprise” after the Welshman was left out of the squad completely.

Everton reached the FA Cup quarter-finals for the first time since 2016 after a thrilling 5-4 extra-time win over Tottenham at Goodison Park.

Bernard, who looked destined to leave the club less than a fortnight ago, scored the decisive goal seven minutes into the added period to overshadow the efforts of opposing substitute Harry Kane, who came off the bench to make it 4-4 in the 83rd minute.

Bale has played just 230 minutes in the Premier League for Spurs since joining on loan from Real Madrid in the summer, starting just twice.

He was not in the Spurs squad for the tie, despite posting a picture from his training session yesterday with the caption “Good session today,” and Mourinho offered an explanation for the Welshman’s absence, which he was visibly surprised by.

“We played against West Brom on Sunday, he didn’t play. On Monday I was a little bit surprised by him wanting to have a scan because he was not feeling comfortable with the muscular area, so he didn’t train on the Monday,

“Then on the Tuesday he trained with the team, but I was informed that his desire was to work with the sport science to strengthen the area he was not feeling comfortable with, and that is the reason why he was not here.

“I don’t think it is an obvious, clear injury. I would say that it feels uncomfortable, and because of that the training session couldn’t be 100 per cent, but I don’t think we can speak about an injury.”

Asked again about Bale’s situation, Mourinho said: “This is the Everton post-match press conference I think, and Gareth was not here. I am being completely open and honest about the situation.”

In a classic yet chaotic cup tie, Spurs came out second best due to some questionable defending, as they first surrendered a 1-0 lead before fighting back from 3-1 down and then 4-3 down.

Mourinho told BT Sport after the game: “I enjoyed it, and I didn’t enjoy it. I enjoyed the way we played when we had the ball, from the first minute, immediately. We scored four goals and four goals was not enough.

He also said in his post-match press conference: “Please don’t make me speak too much about the defensive mistakes we made, because that is obvious, and I don’t feel very comfortable to be speaking about it. We played amazingly well with the ball, and we made mistakes and we were punished by that.”

Dominic Calvert-Lewin was brought off early in the second half with a hamstring problem, and Everton’s assistant manager Duncan Ferguson is hoping the news will be positive after a scan.

Asked what the issue was, he said: “We’re not quite sure, but he might have tweaked his hamstring. Hopefully it’s not too bad, but it looks like a hamstring tweak.”

On the game, he said: “We are delighted. We don’t need to talk about tactics. We just congratulated them for their spirit and great attitude, they kept going right to the end again, like at Old Trafford. They were fantastic, and to score five goals is brilliant.

“Tonight we go into extra-time, go behind and then in front – fair play to the players, they’ve dug in and showed a great fighting spirit.”

“I thought it was going to be a chess match between Mourinho and Ancelotti. The manner it’s been played in has been quite incredible.

“It could have gone either way but Everton have really dug deep. Carlo Ancelotti will be delighted with the character and quality his side have shown.

“It was the most extraordinary cup tie I’ve seen for a long time but Everton deserve it. They’ve worked so, so hard.

“Tottenham have the Carabao Cup final to look forward to but I think was important for both teams. In the cold light of day, Jose will think this was an opportunity missed.”

The FA Cup schedule has been confirmed, with the final set to take place at Wembley on Saturday May 15.

There will be no replays this season to help ease fixture congestion.

The draw for the quarter-final will take place on Thursday evening, ahead of the final fifth-round tie of the week between Barnsley and Chelsea.

Everton now host Fulham in the Premier League on Sunday at 7pm, before hosting leaders Manchester City on February 17 at 8.15pm.

Tottenham now go to Manchester City on Saturday Night Football at 5.30pm, live on Sky Sports Premier League, before going to Austrian side Wolfsberger in the Europa League round of 32 first leg on Thursday at 5.55pm.