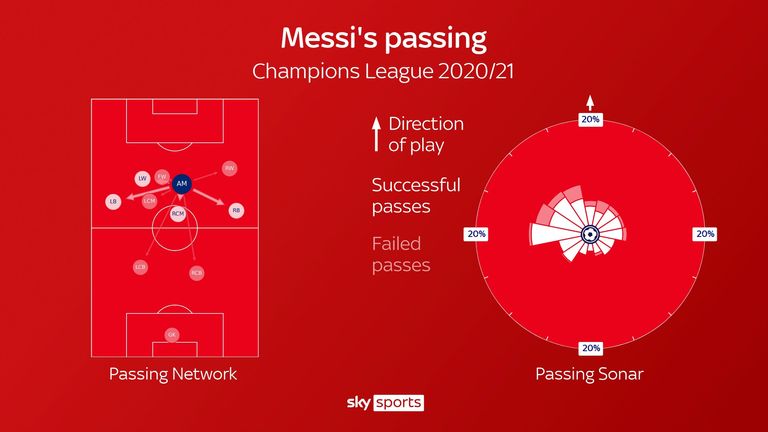 Ninety per cent of climbers reach Everest base camp. Only the strong and the skilled make it to the summit of the world’s highest mountain. But even Everest base camp is almost as high as Mount Kilimanjaro. It is a four-day descent from there. Context matters.

Lionel Messi is on the descent himself. At 33, his very best years are behind him. That lightning turn of pace is gone and while his ball manipulation remains unsurpassed, time is one opponent he can never beat. Another Champions League season has now slipped by.

Just for a moment in Paris on Wednesday evening, there was a flicker of hope that the old magician might conjure up one more remontada for the road. A fierce shot from distance pulled one goal back. A penalty award soon after offered the chance of a second.

But that spot-kick was saved and with three goals still needed to have any hope of keeping Barcelona in a competition that Messi has won four times, they could not score one. Kylian Mbappe goes through. Messi joins Cristiano Ronaldo on the outside looking in.

It feels like a neat transfer of power on a night when Mbappe broke Messi’s record as the youngest player to score 25 Champions League goals. Erling Haaland had become the fastest to reach 20 of them as Ronaldo’s exited with Juventus. Power shift confirmed.

There is little point arguing that either are what they were. But how right is it to rush to crown new kings when the old ones are still alive and kicking the ball like Messi did here?

Even aside from his wonderful goal, he was the game’s outstanding player against Paris Saint-Germain, having the most shots on target, making the most passes in the opposition half, creating the most chances, completing the most crosses and the most dribbles.

There was the delightful moment when he left two markers on the deck with the merest hint of a dropped shoulder. Moments later he was nudging the ball in behind the PSG defence only for Ousmane Dembele to waste yet another opportunity to score.

Barcelona were better than they have been for some time but the team’s limitations were obvious. Messi can no longer count on Xavi, Andres Iniesta and Dani Alves for company. The club is in transition on and off the pitch and their captain is suffering as a result.

Messi’s game has changed too. The scamp who pressed with a passion, Pep Guardiola’s best defender, is gone. Energy conservation is the theme now, a man who appears to have reasoned that 60 games a year played at his pace is better than far fewer at full tilt.

But while Mbappe and Haaland deserve their praise and are worth being excited about, there is a danger that in acknowledging Messi’s decline, we risk judging him not against those who have come to claim his crown but against the player he once was.

Nobody, not even Messi, can compete with that.

There will be no repeat of 2012, when he scored a freakish 91 goals for club and country in the calendar year. But consider that while Mbappe has 10 so far in 2021 and Haaland is ahead of him on 14, Messi, the fading force, has found the net on 15 occasions himself.

These bald statistics matter because they reveal a picture free from the narrative of a man usurped. Put simply, if anyone else were producing the numbers that Messi is currently producing there would be little talk of decline, only that this player might be – objectively – the outstanding performer in European football.

He is not only the top scorer in La Liga this season, he has created the most big chances for others too. Only the poor finishing of his team-mates stops him topping the assist charts – and there were plenty of examples of that for Barca in Paris – but he is still fourth.

This is what still sets Messi apart in the numbers. While Mbappe and Haaland are scoring slightly more goals per 90 minutes this season, there is more to his game. They are not creating as many chances combined or completing as many dribbles combined as he does.

The dribbles are not as eye-catching as before but there have still been 105 of them in La Liga, far more than anyone else. Messi is top for touches, passes, crosses and through-balls.

In the Champions League, the numbers are similar. Messi has scored five goals in the competition this season but also ranks second for chances created and second for dribbles completed. He continues to be three players rolled into one – scorer, creator, dribbler.

He is at his own personal summit no longer. But the level is still lofty.

It is natural to view Messi’s current level through the prism of what came before. The great soprano Maria Callas spent the second half of her career with fans lamenting her lost octave. Paul McCartney has sold 100 million records since the end of The Beatles.

There is a tale about Peter Cook, once voted by his fellow comedians as the greatest comic mind of them all, that illustrates the danger of comparison with one’s own earlier standards. It happened when he agreed to work with Chris Morris, the standout satirist of his day.

Morris “held out no great hope that he wouldn’t be a boozy old sack of lard with hair falling out and scarcely able to get a sentence out” – that was the reputation that preceded the ageing Cook. Amid hushed tones, folk spoke of lost talent, a gift long since squandered.

Instead, Cook “proceeded to skip about mentally with the agility of a grasshopper” as he improvised a series of “ridiculous scenes flipping back on themselves” to leave Morris stunned. “It was amazing,” said the much younger man. “Really quite extraordinary.”

Cook was not what he was. But he was still better than the rest.

Where is Messi on his own journey down from the top? Somewhere near Everest base camp, one suspects. Mount Kilimanjaro levels. In football terms, that four-day hike to the bottom could be many years away yet. Be sure to enjoy the player he still is until then.