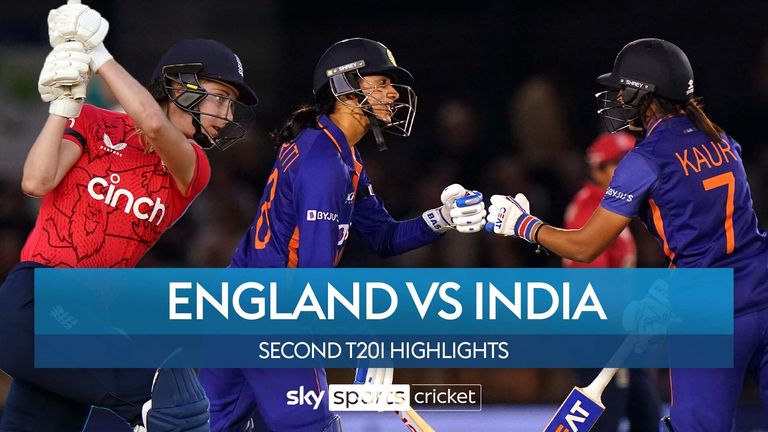 Aged 17, Freya Kemp became the youngest player to score an IT20 half-century for England in Tuesday’s match at Derby; India chased down the target of 143 with 20 balls to spare to level the three-match series at 1-1 An historic half-century from Freya Kemp was not enough to prevent India levelling the IT20 series against England with an eight-wicket win in Derby.

The hosts found themselves reduced to 54-5 after opting to bat first, but a sixth-wicket stand of 65 between Kemp and Maia Bouchier helped get England back on track as they reached 142-6.

Even after Bouchier’s departure for 34, 17-year-old Kemp stood firm and become England’s youngest player to make an IT20 half-century as she finished unbeaten on 51 from just 37 balls. Smriti Mandhana got India off to a flying start in their reply, though, with an opening stand of 55 alongside Shafali Verma and the left-hander’s 79 not out saw the tourists over the line with 20 balls to spare to send the series to a decider in Bristol on Thursday.

England stand-in captain Amy Jones had no hesitation in opting to bat first at the Incora County Ground as her side took aim at securing a series victory following Saturday’s nine-wicket win at Chester-Le-Street.

But openers Sophia Dunkley and Danni Wyatt fell for five and six respectively early on, and then a mix-up saw Alice Capsey run out while stranded halfway down the wicket after making just four, to leave England 16-3 after three overs.

Bryony Smith (16) and Jones (17) offered some resistance as the home side sought to rebuild their innings, but both then fell to Sneh Rana – the former holing out to Radha Yadav off the spinner after being dropped the previous ball and the latter being clean bowled after missing with an attempted reverse sweep.

Teenager Kemp and Bouchier, 23, set about hauling England back into the contest as they batted with freedom and confidence, with their partnership eventually ending when Bouchier was stumped off the bowling of Rana, who finished with figures of 3-24, in the 18th over.

Kemp reached her historic milestone with the sixth boundary – three fours, three sixes – of her innings in the final over and along with Sophie Ecclestone (seven not out) saw the hosts set India 143 to win.

Opener Mandhana ensured India never looked in any danger of being unable to reach the target, though, and, along with Verma before her dismissal for 20 with a superb caught and bowled from Ecclestone, set the tone early on as they raced to 55-1 at the end of the powerplay.

England seamer Freya Davies bowled Dayalan Hemalatha for nine before she was able to get set, but there was no stopping Mandhana as she struck 13 boundaries in her unbeaten 79 from just 53 balls.

Skipper Harmanpreet Kaur’s brisk 29 from 22 balls helped see India comfortably over the line too and attention now turns to the series decider.

Jones: What a talent Kemp is 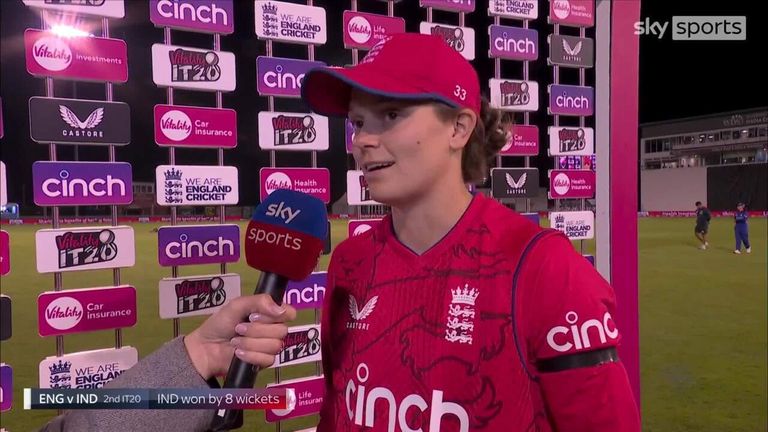 England captain Amy Jones: “I think potentially we were a bit under par [in setting a target of 143]. After the start we had it was brilliant from Kemp and Bouchier, we knew we had a total that we had a good crack at defending.

“Once we didn’t get the early wicket it made it harder, but India batted brilliantly.

“What a talent [Kemp is]. We have seen it through the summer and for her to get her first 50 so early, great to see.” 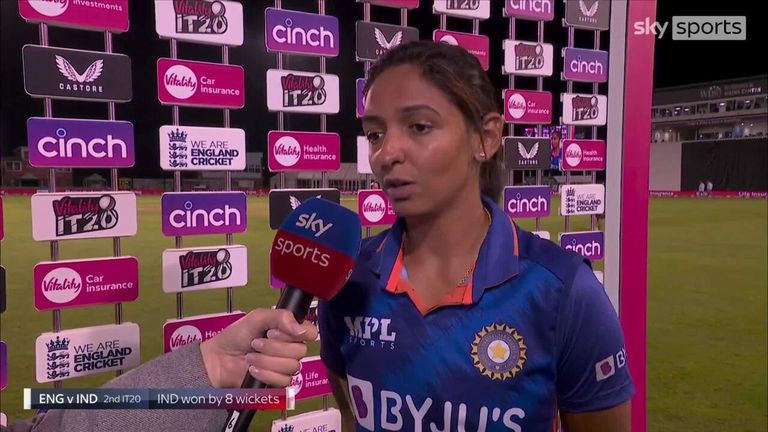 India skipper Harmanpreet Kaur: “I think in the last game the intent was missing and before coming into the game we discussed those things because if we want to win we have to do it with intent. I’m really happy and everybody was looking to win.

“We do have plans for all the batters. It’s important to have a plan and execute it, credit goes to the bowlers and the fielders were supporting them.”

Watch England and India face off in the IT20 series decider in Bristol on Thursday, live on Sky Sports Cricket from 6pm.