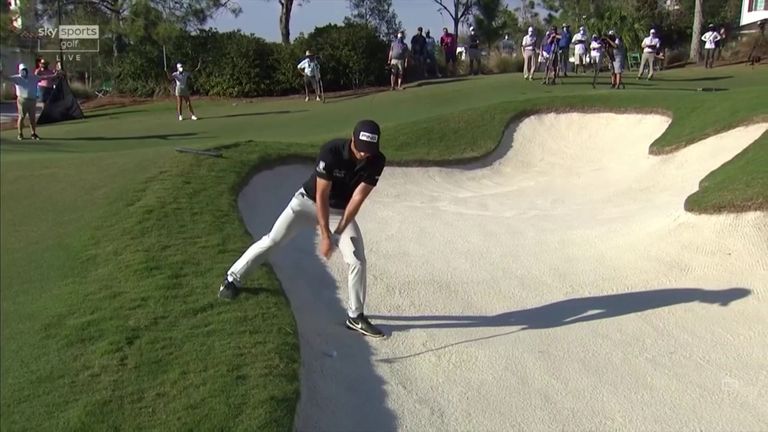 Viktor Hovland seven shots behind halfway leader Brooks Koepka after quadruple-bogey on final hole of his second round; Ryder Cup hopeful blames “brain fart” for his shot selection at The Concession Club

Viktor Hovland slipped down the leaderboard at the WGC-Workday Championship after being unable to build on a blistering start in Florida.

The Norweigan posted five consecutive birdies in his first six holes at The Concession Club, with back-to-back gains from the seventh taking him to seven under for the day and briefly within two of the lead.

Hovland then racked up an ugly quadruple-bogey at the par-four ninth – his final hole – after hacking out of the bushes into the bunker and then thinning his next shot to an unplayable lie, with a three-under 69 seeing him head into the weekend seven strokes behind leader Brooks Koepka.

“I mean I felt like I did a good job of going through my options and not really stressing too much,” Hovland told Sky Sports. “The one brain fart there was that I tried to play the hero shot from the lip of the bunker.

“I hit a terrible shot and the second shot is where all the trouble starts. I just need to catch it a little bit cleaner and hit it on the green, then I’d shoot 65. It’s just small margins.”

Bryson DeChambeau is a further stroke off the pace despite posting a score 13 shots better than the opening day, with the US Open bouncing back from an opening-round 77 to match Collin Morikawa’s joint-low round-of-the-day 64.

“It’s just a tale of golf, you can have both ends of the stick,” DeChambeau said. “I didn’t play terrible yesterday, I just didn’t get anything going my way, especially on that back nine. Had some bad mistakes and that’s what happened.

“It was a lot of perseverance, my caddie kept me strong and we just kept plodding along and making some great putts out there.”

Watch the WGC-Workday Championship throughout the weekend live on Sky Sports. Live coverage continues on Saturday with Featured Groups from 1pm, ahead of full live coverage from 5pm.