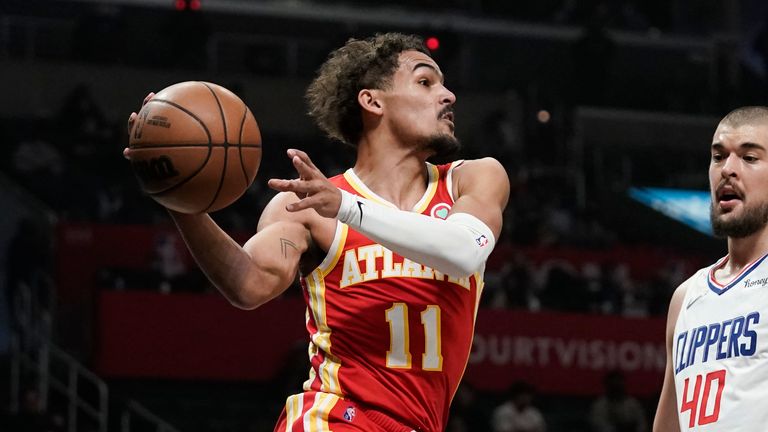 Amir Coffey matched a career-high 21 points and helped the Los Angeles Clippers end their three-game losing streak with a 106-93 win over the visiting Atlanta Hawks on Sunday.

Coffey, playing on a two-way contract, was 8-for-12 from the field and matched another career high with five three-pointers. It was the first time he had led the Clippers in scoring this season, plus added five rebounds and three assists.

Six other Clippers players scored in double figures, including veteran Serge Ibaka with 16 points off the bench and Marcus Morris Sr. following his season-high of 29 against Memphis on Saturday by scoring 15 points.

Atlanta’s Trae Young scored 19 points and saw his franchise-record streak of 25-plus-point games end at 17. Young was 8-for-21 from the floor and only 1-for-6 from distance, with seven assists. Bogdan Bogdanovic also scored 19 points, one shy of his season-high.

The Clippers finished the first quarter on a 15-4 run and took a 31-23 lead. Riding the hot hand of Bogdanovic, who scored 15 in the first half, the Hawks were able to cut the margin to two points in the second quarter, but the hosts led 59-53 at the break.

The Clippers moved 86-73 in front after three quarters and Atlanta never got closer than eight points the rest of the game, meaning the away side finish their 13-day road trip, the longest of the season, at 2-4.

Atlanta played without Clint Capela (left ankle) and Lou Williams and lost Cam Reddish to a right ankle sprain after playing only three minutes in the first quarter.

Atlanta return home on Wednesday to play the Miami Heat in the opener of a two-game home-and-home series. The Clippers, meanwhile, host the Denver Nuggets on Tuesday in the finale of a three-game homestand.