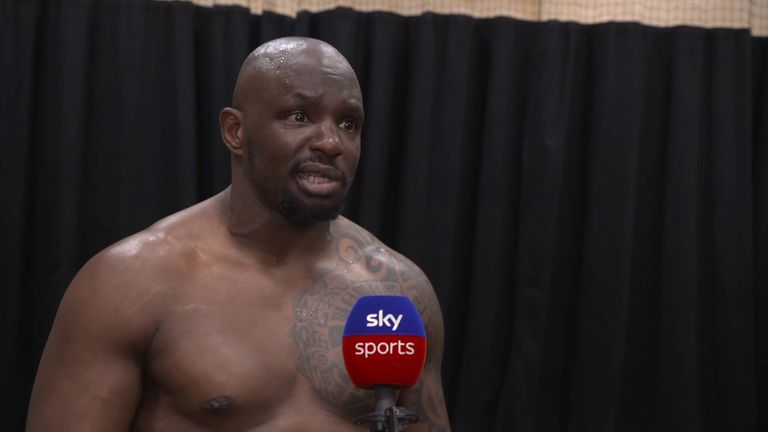 Dillian Whyte has an awkward presence in the always-changing line to the heavyweight throne – never welcomed by the kings, but like an unruly outsider he can never be ignored.

Too quickly written off as uncouth and unworthy at every stage of his life, not least in his downfall last summer in Eddie Hearn’s back garden, Whyte is a stubborn and unwanted irritant to the world heavyweight champions.

Anthony Joshua and Tyson Fury’s focus is on each other but Whyte, scrapping desperately to cling onto his fading hopes of a single shot at glory, emphatically hauled himself back to the front of the deserving queue by demolishing Alexander Povetkin.

His four-round dismantling of Povetkin on Saturday, the man who left him unconscious six months ago, was the culmination of determination that bordered on the absurd. Whyte was calling for this rematch shortly after sitting up and being told what had happened.

It wasn’t just idle chat, he was serious, and on Saturday night we found out why.

He is a bruiser cut from a different cloth even among the savages of the heavyweight division. Whyte told a story last week of how, when working as a doorman, he was stabbed but still turned up to work the following weekend knowing those same assailants would be punters again.

He isn’t a man who shies away.

The Whyte we see inside the ring is the “street thug” that he has complained prevents people from crediting him for his brains, too.

His addition of Harold ‘The Shadow’ Knight, a trainer who led Lennox Lewis to rematch victories and the voice who repeatedly told Whyte to stay behind his jab, was an inspired choice.

Whyte made the type of crucial adjustments to beat Povetkin that Joshua was rightly given great credit for in his own rematch with Andy Ruiz Jr. It is proof of Whyte’s evolution – not only can you out-tough you, he can now stick to a game-plan too.

The slugger from south London had Povetkin dazed inside one minute but, unlike last summer, he remained wary. He hung back, avoided Povetkin’s wild responses, and returned with spite and poise.

That is the sign of an intelligent and improving boxer which does not fit the Whyte stereotype of Brixton’s most feared security guard.

When the Rock of Gibraltar faded into the shadows as merely the third biggest lump on the peninsula, it was eventually Povetkin rather than Whyte who crashed to the canvas to conclude one of the most surreal weeks in boxing memory.

It was a week where Whyte lived on a yacht and received a commemorative coin with his face on it, in a place that has previously hosted just one professional boxing event. One day, we might wake up from these halcyon heavyweight days and realise it was a bizarre illusion.

But by smashing an Olympic gold medallist who had previously only lost in the esteemed company of Joshua and Wladimir Klitschko, Whyte made a statement that he is nobody’s fool.

Povetkin is added to a list of conquests that includes Joseph Parker, Derek Chisora (twice), Mariusz Wach and Lucas Browne. And the beauty of it? He will be disregarded and written off the next time he wades into battle too. But how many in the division have a drastically better list of defeated rivals than Whyte?

As for Povetkin? The sage old warrior is now 41 and offers a representation of what Whyte does not want to become.

The Russian’s Olympic honour remains his top achievement but, although he held a WBA belt, he fell short in his biggest fights against Joshua and Klitschko.

He is a poker-faced trooper of the old school who didn’t smile in the good times so don’t expect much on Sunday morning at the breakfast buffet. But his legacy, if it is over now as his promoter has suggested, should not be taken lightly.

The man known as ‘Sasha’ gave great service in good fights with Hughie Fury, David Price and Carlos Takam. It will be consigned to memory that the first three rounds against Joshua were absolute hell for the champion but that might have ended so differently. Joshua won’t forget those rounds.

Ultimately Povetkin’s career will likely close as a brilliant fighter who saw the mountain top but never reached it.

Whyte can see that same peak, where Joshua and Fury are jostling. Whether Whyte can reach such a rarefied area is the remaining question that hasn’t been answered – but he at least deserves one chance to try.