Harden: 76ers and Nets expected to engage in talks over blockbuster trade 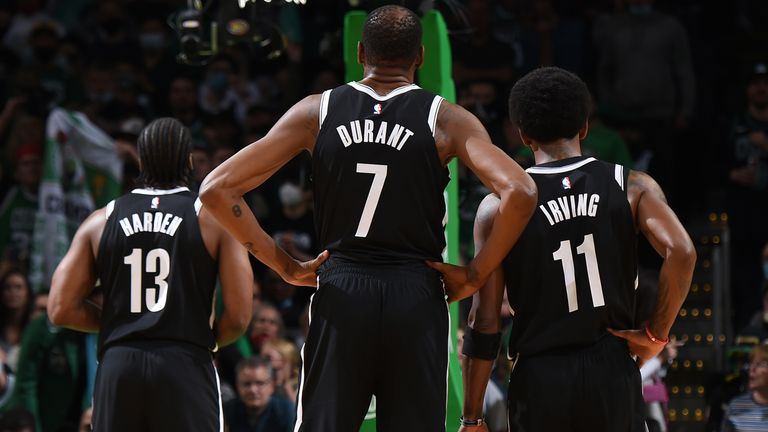 The Philadelphia 76ers are planning to pursue James Harden and the Brooklyn Nets are willing to discuss a deal, according to a report.

With the NBA trade deadline fast approaching this coming Thursday, Friday’s bombshell news announced by The Athletic‘s Shams Charania could see one of the most gifted players in the league moving from one Eastern Conference giant to another.

The emergence of Tyrese Maxey meant that the Sixers were in no rush to active a deal for Ben Simmons before the summer, despite the messy situation between the former Rookie of the Year and the franchise, but now with the possibility of trading for Harden to pair with MVP candidate Joel Embiid, they are expected to actively try to make a deal happen.

Multiple sources told The Athletic it’s expected the 76ers and Nets will engage in dialogue on a deal around Simmons for 2018 MVP Harden with Philadelphia’s roster containing various role players in Maxey, Seth Curry and defensive ace Matisse Thybulle that could help make a deal happen.

The report insists that the Nets believe there is no urgency to make a deal happen but it’s believed that an opening exists which could allow the team build a more well-rounded roster.

James Harden could be leaving Brooklyn. The 76ers want him and the Nets are willing to discuss a deal.

Harden missed Friday’s game for the Nets against the Utah Jazz due to tightness in his left hamstring as the team fell to a seventh straight defeat.

With Kyrie Irving having a player option at the end of the season and Kevin Durant still very much at the peak of his powers, perhaps a trade for Harden would offer more flexibility to GM Sean Marks.

Their big three of Harden, Irving and Durant have managed just 16 games together over the year or so they’ve been together, so that could also factor into whether they decide to deal. There are also questions over his fit on the Nets and whether his ball-hungry style suits them in the long-term.

Philadelphia 76ers’ President of Basketball Operations Daryl Morey has an existing relationship with Harden from their time together at the Houston Rockets so that could help ease the pathway to a deal from Harden’s side.

It’s a major bonus for the Sixers that they could have a shot at pairing a true superstar with Embiid this season, rather than having to wait to the summer. The Nets would surely want a significant haul from the 76ers but, although far from a sure thing, the assets and desire from both sides seem to exist to get a deal done.