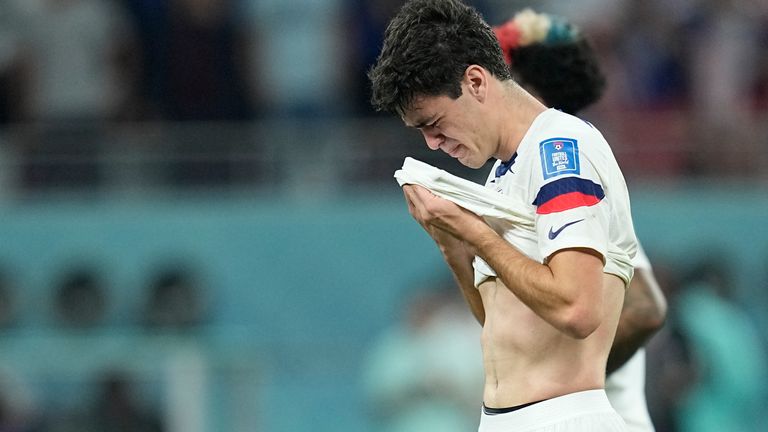 The mother of USA midfielder Gio Reyna has confirmed she reported head coach Gregg Berhalter for kicking his wife over 30 years ago.

Berhalter will not take charge of the USA’s training camp in California later this month amid an ongoing US Soccer investigation after he admitted kicking his wife of 25 years during an argument as a teenager.

The governing body instigated the probe after Berhalter, who took his side to the World Cup in Qatar, revealed he had been the subject of a threat to expose the incident involving his then girlfriend Rosalind in 1991 during the tournament.

On Tuesday Berhalter posted a statement of his own on social media saying an “individual contacted U.S. Soccer” during the 2022 World Cup saying “they had information about me that would ‘take me down'”.

Berhalter says that in 1991 he kicked his now wife Rosalind outside a bar following an argument.

“There are zero excuses for my actions that night; it was a shameful moment and one that I regret to this day.” Berhalter wrote. “At that time, I immediately apologised to Rosalind, but understandably, she wanted nothing to do with me.”

The two reconciled after the fight and have been married for 25 years with four children.

Danielle Reyna, the wife of former USA captain Claudio and a former roommate and soccer teammate of Berhalter’s wife Rosalind, revealed she reported the incident to US Soccer on December 11.

Her son Gio did not start a match for USA at the World Cup in Qatar, with Berhalter saying in early December that an unnamed player was sent home early from the USA camp for “not meeting expectations on and off the field.”

But in a statement, she said: “To set the record straight, I did call (U.S. Soccer sporting director) Earnie Stewart on December 11, just after the news broke that Gregg had made negative statements about my son Gio at a leadership conference.”

She continued: “As part of that conversation, I told Earnie that I thought it was especially unfair that Gio, who had apologized for acting immaturely about his playing time, was still being dragged through the mud when Gregg had asked for and received forgiveness for doing something so much worse at the same age.

“Without going into detail, [Berhalter’s statement] from [Tuesday] significantly minimize the abuse on the night in question. Rosalind Berhalter was my roommate, teammate and best friend, and I supported her through the trauma that followed. It took a long time for me to forgive and accept Gregg afterward, but I worked hard to give him grace, and ultimately made both of them and their kids a huge part of my family’s life. I would have wanted and expected him to give the same grace to Gio. This is why the current situation is so very hurtful and hard.”

But Danielle Reyna denied blackmailing Berhalter with the information of the incident, and insists she did not ask for him to be fired.

“But I want to be very clear that I did not ask for Gregg to be fired, I did not make any threats, and I don’t know anything about any blackmail attempts, nor have I ever had any discussions about anyone else on Gregg’s staff-I don’t know any of the other coaches.”

Gio Reyna’s father Claudio also said in a statement: “I support my wife, Danielle, and her statement. I too was upset by Gregg’s comments about Gio after the U.S. was out of the World Cup, and I also appealed to Earnie Stewart on December 11 asking him to prevent any additional comments.”

Commenting on the widened investigation, US Soccer said in a statement on Tuesday: “Through this process, US Soccer has learned about potential inappropriate behaviour towards multiple members of our staff by individuals outside of our organisation.

“We take such behaviour seriously and have expanded our investigation to include those allegations.

“We appreciate Gregg and Rosalind coming forward to speak openly about this incident. Consistent with our commitment to transparency, we will share the results of the investigation publicly when it is complete.

“US Soccer condemns violence of any kind and takes such allegations very seriously.”

Anthony Hudson, who served as an assistant coach during the World Cup in Qatar, will take charge of a training camp this month.