Ruturaj Gaikwad hits 101 not out from 60 balls, sealing maiden IPL hundred with six off final delivery of Chennai innings; batter helps table-topping CSK to 189-4 in Abu Dhabi – only for Rajasthan to chase that down with 15 balls to spare to reignite their play-off aspirations in style 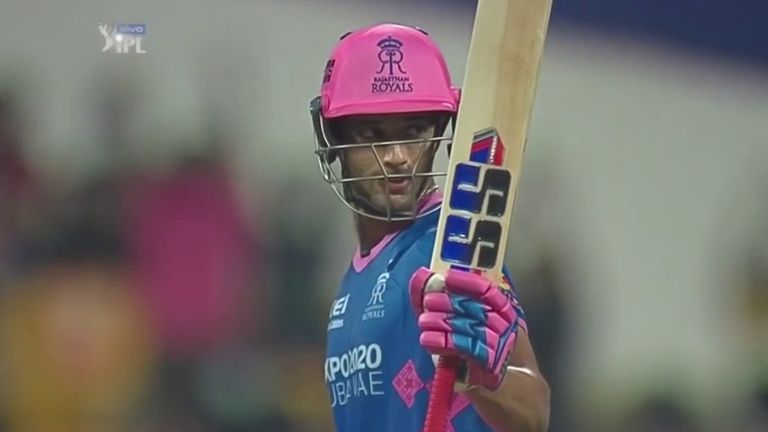 Ruturaj Gaikwad scored a sensational century in vain as Rajasthan Royals powered their way to a target of 190 in just 17.3 overs to defeat Chennai Super Kings and reignite their Indian Premier League play-off hopes.

Gaikwad (101 not out off 60 balls) hit the first hundred since the tournament resumed in the UAE and the fourth of the season, with Rajasthan’s Jos Buttler and Sanju Samson and Royal Challengers Bangalore’s Devdutt Padikkal having tonked tons in India earlier this year.

Gaikwad nailed five sixes and nine fours in his maiden IPL century, which he clinched from the last ball of the innings by thumping Royals bowler Mustafizur Rahman for a towering maximum over deep midwicket.

The 24-year-old progressed from fifty to three figures in just 17 balls – taking him past Punjab Kings captain KL Rahul as the leading run-scorer in the 2021 competition – while his unbroken stand of 55 from 22 deliveries with Ravindra Jadeja (32no off 15) came amid Super Kings plundering 89 runs from their final six overs as they posted 189-4 in Abu Dhabi.

Yet, that total proved insufficient as 19-year-old Royals opener Yashavi Jaiswal (50 off 21) creamed a 19-ball fifty during a rollicking opening stand of 77 with Evin Lewis (27 off 12) inside six overs, before Shivam Dube (64no off 42), captain Samson (28 off 24) and Glenn Phillips (14no off 8) steered their team to a seven-wicket victory with two and a half overs to spare.

Jaiswal went six, six, four, six off Josh Hazlewood in a 22-run fifth over as he raced to his first IPL fifty, while Dube crunched back-to-back sixes off Moeen Ali in the 10th over en route to 31-ball maiden half-century.

Dube and Phillips were two of five personnel changes for Royals as they looked to snap a three-game losing streak, with Liam Livingstone one of those dropped following scores of 25, one, four and six.

Livingstone’s England team-mate Sam Curran was recalled by Chennai but had a night to forget, bagging figures of 0-55 from four overs having gone for 0-56 from four overs in his previous game against Kolkata Knight Riders.

Royals’ stunning win moved them up to sixth spot, level on 10 points with fourth-placed Kolkata in a logjammed race for the play-offs, with only net run-rate separating those two sides as well as fifth-placed Punjab Kings and seventh-placed Mumbai Indians ahead of the final two group games.

Table-topping Chennai’s defeat, meanwhile, ended a four-match winning run, although MS Dhoni’s men are already guaranteed a top-four finish and will now be looking to cement a place in the top two, which would give them two chances to make the final on October 15.

Gaikwad did not deserve to be on the losing side, showing his class from the first ball of the match as he drove Royals seamer Akash Singh for a terrific straight four down the ground.

Other highlights included back-to-back sixes off Rahul Tewatia in the 15th over and then taking Akash’s 16th over for 17 but the crowning moment came from the final ball as he launched Mustafizur for six to seal his century and move onto 508 runs for the campaign.

Ruturaj Gaikwad’s acceleration through the middle overs is so good. Sign of class. He is ready to play at a higher level.

Gaikwad – who put on 57 with Moeen Ali (21 off 17) for the third wicket – looked in danger of missing out on three figures as Jadeja dominated the strike in the final few overs.

But the opener got on strike with two deliveries remaining and after a dot ball first up he cracked the next away for the milestone-clinching maximum.

The runs continued to flow in the Rajasthan chase, starting when openers Lewis and Jaiswal clobbered 13 boundaries between them inside five overs.

When Lewis and Jaiswal departed, Dube – who dominated a stand of 89 from 58 balls with Samson – took over the big hitting as Royals cruised to a run rate-boosting victory.

There is an IPL double header live on Sky Sports Cricket on Sunday. Watch Royal Challengers Bangalore vs Punjab Kings from 10.50am and then Kolkata Knight Riders vs Sunrisers Hyderabad from 2.50pm.