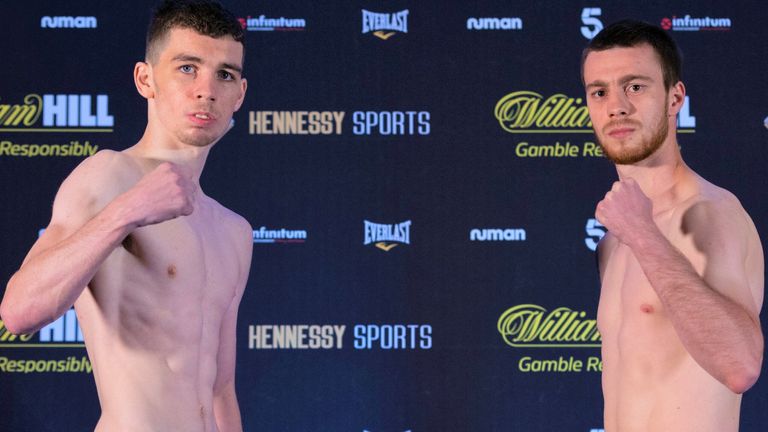 Tyson Fury shared secrets on how to ‘distract’ an opponent while training with Irish contender Stevie McKenna, who also practised spiteful body shots with the WBC champion.

Fury’s plans for an undisputed world title clash were thrown into disarray after a court of arbitration ruled that he should face Deontay Wilder in a third fight, while rival champion Anthony Joshua is set to face Oleksandr Usyk.

“He [Fury] called me into the ring and showed me a few things,” McKenna told Sky Sports. “I got to learn from Tyson.

“He’s a great man and it was unbelievable, sharing the ring with him, and him teaching me some new things.

“He was telling me to use my long reach and keep the lead hand out to distract the opponent and keep them off you. A bit [like] what he does.

“When he’s out of range, keep his lead hand out.

“He was just showing me different things and I learned from them. It’s great to learn from a guy like Tyson Fury, he’s a great man.

“He told me to throw in body shots. Go body, head, keep going up and down.”

McKenna was also invited to test Fury’s punch resistance, telling Sky Sports: “Straight after I’d sparred, I was on the bag and he called me. He wanted to do some work with me, some sparring.

“We just did some body sparring. He can take a good punch too.

“I didn’t let them in fully, but I was putting them in good and hard and he would take them.

“He just told me to keep doing what I’m doing and I’m going to go the whole way.”

With seven knockouts in seven wins, McKenna has already displayed his explosive power in the pro ranks and was asked to help Josh Taylor prepare for his undisputed world super-lightweight title clash with Jose Ramirez this weekend.

McKenna, who has also sparred with Ramirez, relished the opportunity to trade punches with Scotland’s WBA and IBF champion.

“It was great sparring for him and me,” said McKenna, who returns to the ring against Damian Haus tonight at Skydome in Coventry.

“Jose is more of a come forward, brawler type fighter and Josh is a little bit more technical and smarter.

“I would say it will be a fight of the year contender. It’s one of those fights, it’s just hard to call. It’s all on the night and whoever wants it more. But Josh is looking really good, really sharp.

“It was top quality working with Josh Taylor. I couldn’t have asked for better sparring ahead of a fight on Saturday night.

“I know what I’m capable of. I just have to take my time and take each fight, keep stepping up and progressing. Mick Hennessy is the man to do that with me. He’s going to bring me to world titles.”