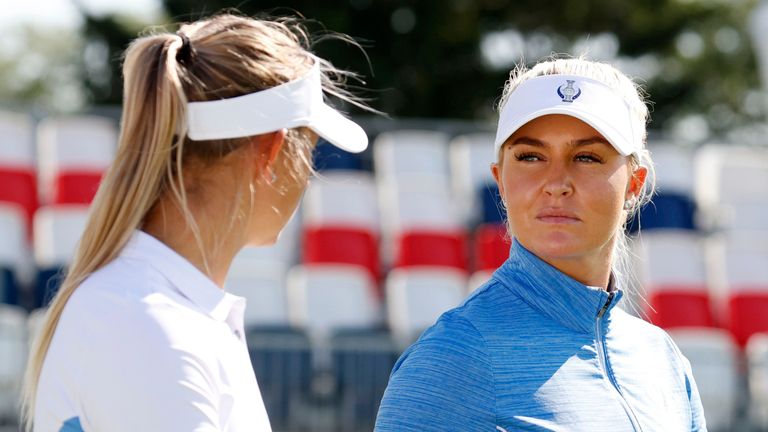 Catriona Matthew’s European side travel to Ohio to try and secure just their second victory on American soil in Solheim Cup history – watch throughout the weekend live on Sky Sports Golf’s YouTube channel.

Team Europe will look to build on their impressive Saturday display and extend their lead on day two of the Solheim Cup, with both sessions of action available for free via Sky Sports Golf’s live YouTube stream.

Catriona Matthew’s side dominated the foursomes and shared the spoils with the Americans in the fourballs to move into a 5.5-2.5 advantage, bolstering their hopes of back-to-back victories in the biennial contest.

Matthew was part of Europe’s only previous away win in the 2013 contest, where she claimed the half point that guaranteed victory, with the Scot having three players from that team – Charley Hull, Carlota Ciganda and AIG Women’s Open Champion Anna Nordqvist – in this year’s line-up.

Georgia Hall, Mel Reid and Celine Boutier are among the other experienced players in the European team, while 2020 AIG Women’s Open winner Sophia Popov and Ireland’s Leona Maguire both make their Solheim Cup debuts.

The two teams will compete in foursomes and fourballs over the first two days, with four matches in each session on Sunday and all 12 players from each team then competing in the singles on Monday.

Sky Sports is broadcasting all three days from one of the biggest events in the golfing calendar, with coverage starting from midday on Sunday and 4.30pm for Monday’s singles matches.

The European Tour’s DS Automobiles Italian Open and the PGA Tour’s season-ending Tour Championship will also be live throughout the week, with both events on the red button and on Sky Sports Mix.