The Phoenix Suns reached the midway point of their season with the league’s best record and will look for a positive start to the second half of their schedule when they visit the Detroit Pistons on Sunday from 6pm.

The Suns have a 32-9 record, including two wins at their beginning of their current five-game road trip. They defeated Toronto 99-95 on Tuesday before pulling away from Indiana 112-94 on Friday.

Devin Booker led the way against the Pacers with 35 points.

“He made some tough shots,” said Suns head coach Monty Williams. “We gave up 38 points in that third quarter, so we needed something to offset that.”

The Suns closed out the game by outscoring the Pacers 32-18 in the fourth quarter. Phoenix had a 23-2 run which began late in the third quarter. 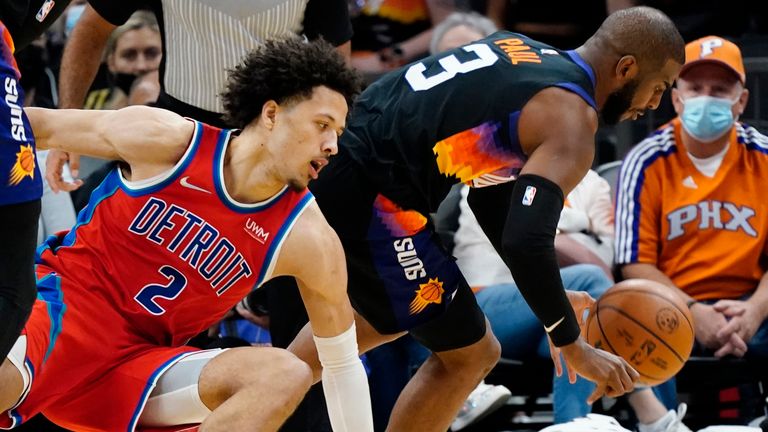 Mo and BJ look ahead to this Sunday’s game, as an improving Pistons side face the best team in the league in the Phoenix Suns.

Phoenix entered play Saturday sixth in the NBA with 45.9 rebounds per game and showed their prowess against the Pacers. Deandre Ayton and Jalen Smith collected 12 rebounds apiece, while Jae Crowder had 11.

“That’s what we’ve talked about, our team having to be more physical,” Williams said. “We outrebounded them by nine (51-42). That’s huge for us. They had just nine offensive rebounds. Even games we didn’t rebound as well, the effort was there. We just saw much more will and pursuit of the ball.”

Phoenix have won five of their last six games with the only stumble coming against Miami in last Saturday’s 123-110 loss. Booker is averaging 24.2 points during that six-game stretch despite shooting 39 percent from the field.

“I’m a scoring guard and I get paid to make plays and put the ball in the bucket,” Booker said. “That doesn’t come without Deandre setting good screens and Chris (Paul) getting the ball there on time.”

Detroit entered the new year with just five victories but have gone 5-3 this month.

“I think we have grown,” said Pistons coach Dwane Casey. “Knock on wood, I don’t want to curse ourselves, but I think we’ve grown as far as what it takes to win games.” Highlights of the Phoenix Suns against the Indiana Pacers in Week 13 of the NBA.

The Pistons never trailed against Casey’s former team in a 103-87 victory over the Raptors on Friday. They will carry a four-game home winning streak into Sunday’s contest.

The road has been less comfortable. Detroit lost 133-87 at Chicago on Tuesday.

“I feel like (against the Bulls) we came out there and we weren’t ourselves,” said Pistons forward Hamidou Diallo. “We didn’t have pride out there. We wanted to not come out like that (Friday). We wanted to come out and make sure we were the aggressor, hit first, just give ourselves a chance from start to finish.”

Diallo scored 18 points and Trey Lyles led the way off the bench with 21 points and seven rebounds. Cade Cunningham also had 18 for the Pistons.

“I’ve said in the past, we’ve had opportunities to hit the team first and we came out lackadaisical,” Lyles said. “But I think (Friday), our energy was where it needed to be at the start of the first quarter and the third quarter and it showed in the outcome of the game.”

Detroit will embark on a four-game road trip following the game.