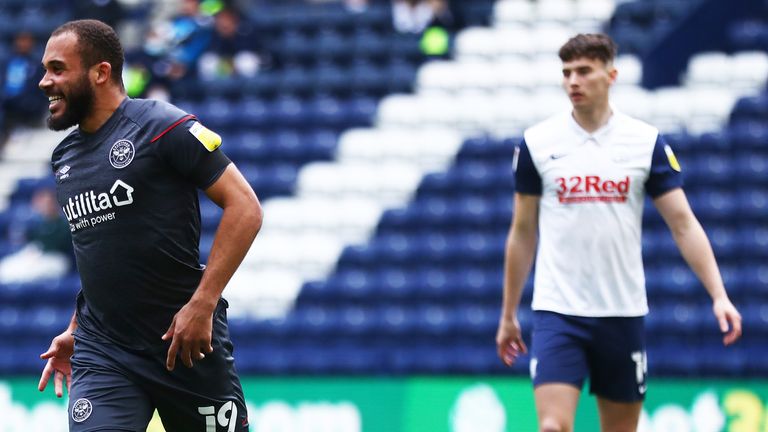 The Bees scored twice in the first half and three times in the second to end a run of four straight Championship draws in emphatic style.

Their biggest away win of the season moved Thomas Frank’s side to within nine points of second-placed Watford, with six games still to play.

Preston, meanwhile, slid to their first defeat in three games since interim boss Frankie McAvoy took over from Alex Neil.

Frank’s visitors threatened first, with Ethan Pinnock heading over the top as he rose to meet Bryan Mbeumo’s clipped free-kick.

The Bees then raced into the lead in the ninth minute.

An incisive move down the right culminated with Mads Roerslev whipping a cross in for Mbeumo, who clinically side-footed his fifth goal of the season past Daniel Iversen from eight yards.

That was a blow for Preston, but they soon rallied and midfielder Brad Potts cracked a volley from the edge of the box that fizzed narrowly wide.

The Bees struck for a second time through Finnish frontman Marcus Forss, who finished off another Roerslev cross, comfortably crashing his ninth of the season past a flat-footed Iversen.

Brentford were now in cruise control and next to go close was midfielder Mathias Jensen, who trotted calmly towards goal before hammering a shot from 25 yards a couple of feet wide.

The theme continued at the beginning of the second period, with the Bees bossing the contest.

Mbeumo saw a deflected strike fizz over Iversen and behind, then the Preston keeper brilliantly tipped a piledriver from Tarique Fosu over the crossbar.

On the hour mark, the buoyant Bees almost notched what would have been quite a special goal.

German ace Vitaly Janelt somehow managed to drag a shot wide after playing the most perfectly-weighted one-two with Fosu.

Iversen was then called upon to make another competent stop from Fosu as the visitors threatened to extend their advantage.

By the game’s three-quarter point, it was all Brentford and there appeared no way back for McAvoy’s hosts, with 28-goal Ivan Toney the next to sting Iversen’s palms with a thumping angled strike.

The victory was sealed by that man Toney with 15 minutes left as Fosu hung up a cross to the far post where the prolific striker nonchalantly nodded goal number 29 of the campaign past Iversen from a couple of yards out.

Toney then turned provider for substitute Sergi Canos to make it four from close range in the 82nd minute.

Fellow sub Emiliano Marcondes’ calm finish from a tight angle in added time wrapped up a dream day for the Bees.