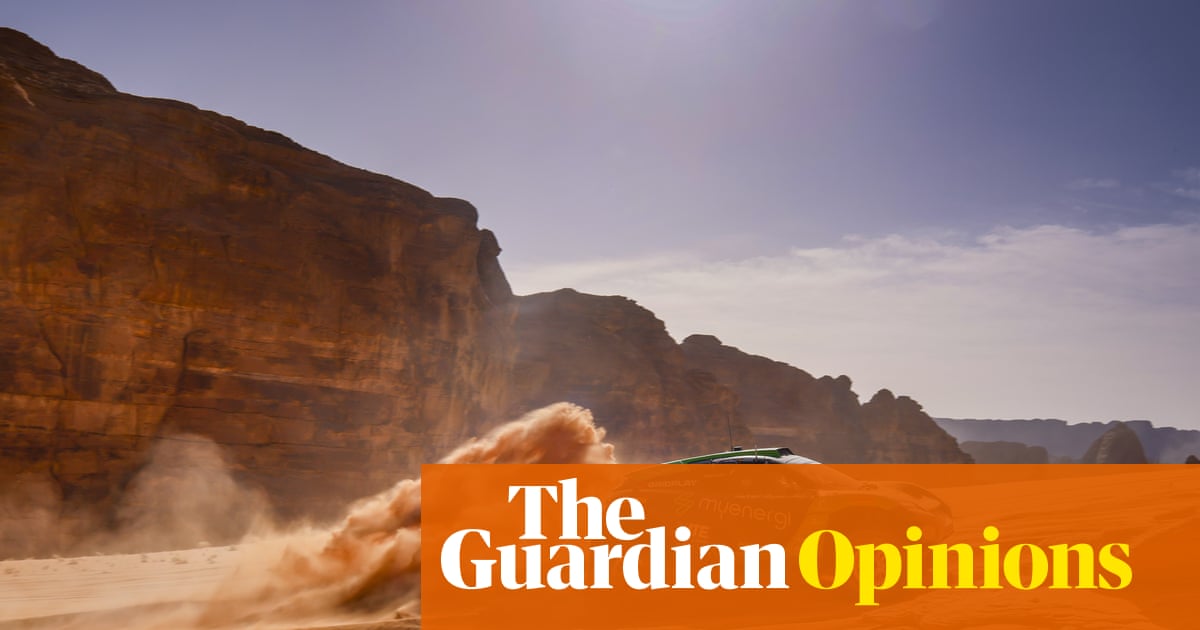 With the aim of hosting a drive that makes a real difference, the new motor racing series Extreme E has progressive ideas at its core. The championship is dedicated to highlighting the climate emergency and in doing so promoting women in racing. Yet there was a curiously deafening silence this weekend over the clear incongruity of these aims with choosing to hold its inaugural meeting in Saudi Arabia.

Extreme E’s intent is to push the urgency of the climate emergency and promote social goals by going racing in a sustainable fashion, with a target of being carbon neutral. The cars are electric SUVs, racing off-road layouts. No fans are at the races, the paddock is a ship that transports equipment around the world and the electricity for the cars is generated by hydrogen fuel cells. Each of the five venues has been chosen to highlight a different form of climate danger and where the series will undertake legacy projects to make a difference locally.

Those are admirable and worthy aims that have garnered interest around the world. Indeed, Lewis Hamilton is a team owner with his X44 squad, as are the former F1 world champions Nico Rosberg and Jenson Button, the latter also driving in the championship. It was the Rosberg X Racing team that won the inaugural X Prix in the Al Ula desert region on Sunday, with drivers the three-time World Rallycross champion Johan Kristoffersson and the Australian rally champion Molly Taylor.

Taylor is not there by accident. The series mandates that each team have a male and female driver and it is, impressively, the first championship to do so. Britain’s Jamie Chadwick, the winner of the inaugural W Series, competes for the Veloce team. Rosberg has praised this positive action towards equality as an example of where Extreme E is “leading the way”.

Yet it led the way for its debut in a country that Amnesty International describes as having “a dire human rights record”, particularly in relation to women activists. In November last year Amnesty condemned an announcement issued by Saudi Arabia’s state security agency categorising feminism, homosexuality and atheism as “extremist ideas”.

After a crackdown in 2018, 13 Saudi women’s rights defenders were put on trial on charges related to their peaceful activism. The most high-profile, Loujain al-Hathloul – who had campaigned for women’s right to drive – was only recently released after receiving a jail sentence. She remains on probation, is subject to a travel ban and alleges she was tortured. Other activists remain detained and Amnesty reports that 10 of them make allegations of also having been victims of torture.

Before the Extreme E race Amnesty openly called for the series to address what it believed was clearly sportswashing.

The issue was not raised publicly at all over the weekend, nor mentioned by the media covering it at an event that was broadcast globally.

But the teams and crews did go to the Red Sea coast near the race to clean the beaches and promote turtle conservation in the area, one of the sport’s legacy projects. Once more the purpose cannot be faulted, not least in the great motivational value of pictures of high-profile stars such as Rosberg and Button getting stuck into some genuine conservation work.

Species at risk on the coast include the endangered green turtle and the critically endangered hawksbill turtle. One of the biggest threats to their survival is climate change. Temperature rises have caused gender ratio differentials in the colonies, rising sea levels erode nesting sites and in 2019 a report stated there was a 90% egg mortality rate due to the flooding of nests from the sea.

With such concern for the environment and, indeed, the consequences of the climate emergency it seems extraordinary that Extreme E would choose a country where the state-owned oil company Aramco was such a direct contributor to these potentially cataclysmic problems. In a report last year by Richard Heede at the Climate Accountability Institute, Aramco was at the top of a list naming the firms responsible for the highest emissions from fossil fuels since 1965. This is publicly and easily obtainable information.

Extreme E conceded that Saudi Arabia is the oil production capital of the world but said the visit was an opportunity to support its move from fossil fuels to renewables. “If we leave those who have the greatest impact out of this important conversation, the overall goal, to lower global emissions, will be impossible to reach. We are keen to work with anyone who is committing to progression.”

However good the cause it is clear the Saudi sportswashing is backed by its petrochemical dollars. Which leaves a bad taste in the mouth. Inevitably, of course, Formula One will race here in December.

In favour of Extreme E, the meeting was, in racing terms, a qualified success. It went off largely as planned and presented a reasonably entertaining proposition on television. The desert location was indeed spectacular, the cars were quick, a good test for the drivers and impressive to watch hurtling through the sand. The racing might have been better with most decided after the first corner as the leader threw up too much dust for rivals to challenge because of visibility but given Covid had prevented trial running, these are issues that can be sorted in time as the series adapts to new venues in Senegal, Greenland, Brazil and Argentina.

Ultimately Extreme E will live or die on the quality of the racing, not its message.

This then can be considered a pretty good debut in that respect but one which surely would have been better served by a locale that was not so clearly at odds with a laudably progressive intent.