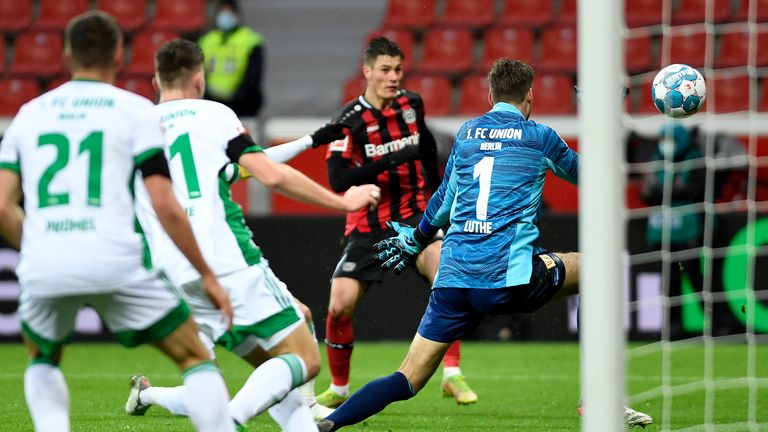 Borussia Dortmund fought back from two goals down after a lacklustre start to beat Eintracht Frankfurt 3-2 and return some excitement to the Bundesliga title race.

Mahmoud Dahoud’s 89th-minute winner, after Jude Bellingham had equalised in the 86th, moved Dortmund six points behind Bayern Munich a day after the leaders’ 2-1 home defeat to Borussia Monchengladbach.

A fired-up Erling Haaland was a factor in all three goals for Dortmund, who might easily have been four goals down in Frankfurt.

Colombian forward Rafael Borre opened the scoring with a simple finish from Filip Kostic’s free kick in the 15th minute, then doubled the lead 10 minutes later after more lax defending.

Evan Ndicka struck the post for Frankfurt before Dahoud gifted Jesper Lindstrom another huge opportunity with half-time approaching, but the midfielder shot wide.

Haaland and Julian Brandt offered some hope for the visitors with attempts around the hour mark, and Thorgan Hazard pulled a goal back soon after when Haaland sent him through.

The Norwegian was involved before Thomas Meunier set up Jude Bellingham for the equaliser, and again before Dahoud curled in the late winner.

Patrik Schick’s 17th goal of the season wasn’t enough for Leverkusen, who were fortunate to emerge with a 2-2 draw against Union Berlin as the visitors twice hit the post late on.

However, the visitors levelled before the break. Lukas Hradecky pulled off two fine saves in quick succession to deny Christoph Trimmel then Kevin Behrens, but was powerless to stop Grischa Promel scoring at the third attempt.

Union’s Max Kruse struck the top corner of the post 12 minutes from time, then Jonathan Tah finally levelled in the 84th with a header from Karim Bellarabi’s cross.

Union came closer to a late winner, with Andreas Voglsammer hitting the post, then missed another chance in injury time as Bastian Oczipka struck the upright again.

Freiburg, who spent the league’s winter break in third place, drew against relegation-threatened Arminia Bielefeld 2-2 despite taking a two-goal lead through Janik Haberer and Jeong Woo-yeong.

Elsewhere, Stuttgart drew against bottom side Greuther Furth 0-0, while Augsburg were beaten 3-1 at Hoffenheim.

Ten-man Barcelona conceded a late goal to draw at Granada 1-1 after Dani Alves set up the opener in his first league match since returning to the club.

The 38-year-old curled in a long ball for Luuk de Jong to steer home a header in the 57th minute.

But Granada poured forward after teenager Gavi Paez was given a second booking with 10 minutes left. Antonio Puertas scored the 89th-minute equaliser with Barcelona hemmed in their own box.

Alves, who helped Barcelona win 23 trophies from 2008-16, started his second stint on Wednesday as third-tier side Linares were beaten 2-1 in the Copa del Rey.

De Jong’s goal was a second in as many league games for the Dutch striker who has been linked with a possible transfer this month, but failing to win left Barca in sixth place, having missed the chance to climb into third and the Champions League spots.

Barcelona next head to Saudi Arabia to play a Clasico against Real Madrid on Wednesday in the semi-finals of the Spanish Super Cup. Atletico Madrid and Athletic Bilbao play in the other semi.

It took Levante 20 matches to finally register a first win of the season, Roberto Soldado and Jose Morales scoring in a 2-0 win over Mallorca.

The only previous win in any competition for the Valencia-based side came against a lower-division opponent in the Copa del Rey, before they were eliminated in the next round by a third-tier Alcoyano.

Mikel Oyarzabal scored his 12th goal in all competitions to help Real Sociedad beat Celta Vigo 1-0, ending a six-round winless streak and moving the San Sebastian side back to fourth.