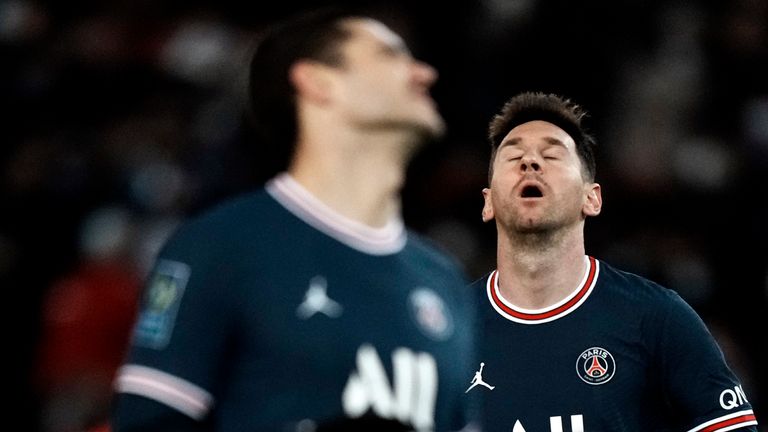 Real are now seven points clear at the top of the table, having played a game more than second-placed neighbours Atletico Madrid. With out-of-sorts Barcelona way back in seventh, Carlo Ancelotti’s side are in a commanding position.

In-form Benzema converted from close range in the 40th minute after Athletic goalkeeper Unai Simon parried a shot by Marco Asensio, scoring his eighth goal in his last seven matches for club and country.

Meanwhile, in the Copa del Rey, La Liga sides Real Sociedad, Real Mallorca, Espanyol, Sevilla and Real Betis all won against lower-division clubs to advance to the next round.

Sevilla struggled the most, needing a goal by Lucas Ocampos in the second half of extra time to defeat fourth-division club Crdoba 1-0 in a match between two southern Spanish clubs.

Messi’s night to forget as PSG held by Nice

Lionel Messi had a night to forget as Paris Saint-Germain were held to a goalless stalemate at the Parc des Princes by Nice in a dull Ligue 1 encounter.

Argentine forward Messi, who skipped training on Tuesday with a bout of gastro-enteritis one day after claiming a record-extending seventh Ballon d’Or, was on par with an uninspired PSG who stayed top of the standings with 41 points from 16 games.

Marseille leapfrogged Stade Rennais into second place with a 1-0 win at Nantes as the Rennes side slumped to a 2-1 home defeat against champions Lille.

Marseille, who have a game in hand, have 29 points, with Rennes on 28 and Nice in fourth place on 27.

RC Lens, who have not won any of their last three games, are fifth on 26 points after drawing 2-2 at promoted Clermont

Junior Messias scored twice on his first AC Milan start as the Rossoneri thrashed Andriy Shevchenko’s Genoa 3-0 to close the gap to Serie A leaders Napoli to one point.

Milan were looking for improvement after back-to-back league losses to Fiorentina and Sassuolo, and they took control early on at the Stadio Luigi Ferraris when Zlatan Ibrahimovic fired home a 10th-minute free kick.

Brazilian winger Messias, who scored the winner against Atletico Madrid on his Champions League debut last week, was named in Stefano Pioli’s starting line-up for the first time and marked the occasion by scoring either side of the break.

In Reggio Emilia, Sassuolo fought back from two goals down to draw 2-2 with Napoli, leaving the Partenopei on 36 points, one ahead of second-placed Milan.

Shevchenko, who won the Champions League and Serie A with the Rossoneri as a player, is still waiting for his first win as Genoa coach after three matches in charge, and his side are 18th with 10 points.

Milan were under pressure to get a result after picking up one point from their last three Serie A games, and seeing Inter Milan overtake them earlier in the evening by beating Spezia.

Napoli looked set to strengthen their grip on first place when Fabian Ruiz and Dries Mertens struck in the second half to give Luciano Spallettis side a comfortable lead at the Mapei Stadium.

But the hosts, fresh from beating Milan 3-1 at the weekend, launched a stirring comeback through a Gianluca Scamacca volley and 89th-minute Gian Marco Ferrari header.

Sassuolo thought they had won it deep in stoppage time when Gregoire Defrel fired into the bottom corner, but Napoli were saved by a VAR review that disallowed the goal for a foul.