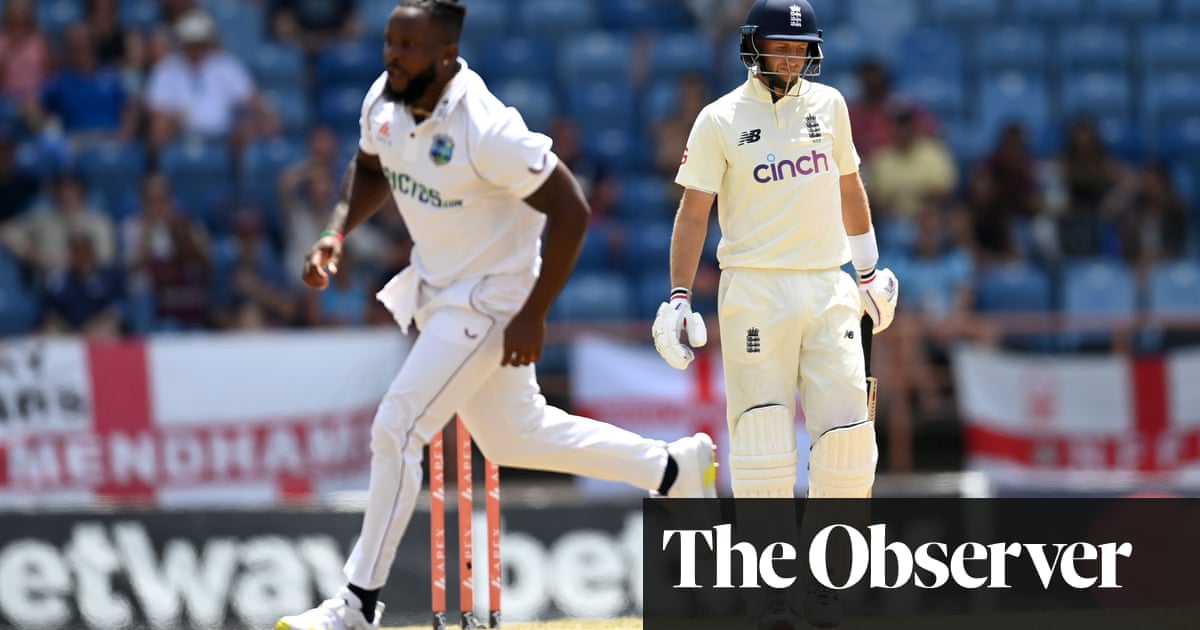 After the year England’s Test team have had, nine out of 10 captains would have resigned or been sacked. Joe Root survived, somehow, while several other heads rolled. After impressing Andrew Strauss with his appetite, he was given the chance to rebuild his own broken team. He banished Stuart Broad and Jimmy Anderson, the only top-class bowlers at his disposal. And in the first two Tests in West Indies, it looked as if it might just be working.

Even a Root-o-sceptic had to admit that there were signs of progress. The fielding was sharper, the team spirit stronger, the batters were shaking off the dismal shackles of the Chris Silverwood era. Dan Lawrence, miscast as he might be at No 4, belted some selfless runs. And although both those Tests were drawn, it was England who were pressing for victory on the fifth day.

But that was on a pair of dead pitches – a double featherbed. In Grenada, on a spicier surface, it’s been glaringly obvious that Root has failed to fix one of his team’s biggest flaws: his own captaincy. On the third morning he ran through his full repertoire of howlers.

When Chris Woakes reverted to his overseas inertia with the new ball, Root kept him on for 50 minutes. When Joshua Da Silva tried a big hit, Root moved his third slip into the leg side to save the single. Despite this, the singles kept coming, nearly all of them on the leg side. For one of them, Da Silva sadistically worked the ball just out of Root’s reach at midwicket, leaving him flat on the floor. His red-ball reset was now accompanied by a red-face emoji.

You had to feel for him, because he’s so clearly a nice person. The problem is that being nice isn’t what captaincy is about. You can smile and smile and be a duffer. You can be a hard bastard, like Nasser Hussain, and drag your team from bad to better. That is what England need now, and Root is not the man to provide it. To paraphrase Shane Warne’s verdict on Monty Panesar, Root hasn’t really captained England in 64 Tests. He has captained them in much the same Test, 64 times.

Joe Root, world-class batsman, has one great misfortune: he has to play under Joe Root, third-class captain. He’s a timid selector, a hopeless reader of a pitch and a terrible tactician. He may come from Yorkshire, but he’s the diametric opposite of Ray Illingworth, Len Hutton or Michael Vaughan – not canny, not calculating, unable to mould his team into more than the sum of their parts. He’s not the conductor of the orchestra: he’s the first violin. He keeps being cast as Sourav Ganguly, when, if just left to bat and bat, he would have a fair chance of being England’s Sachin Tendulkar.

“But there’s nobody else,” people say. That is an awful reason for keeping a failed leader in office, and it’s not even true. Mike Brearley, the greatest living expert on cricket captaincy, felt after the Ashes fiasco that it was time for Root to hand over to Ben Stokes, who led a bunch of understudies to a whitewash over Pakistan last summer. Stokes would certainly bring more spark. But he says he doesn’t want the job, and it would be overloading him when he has just shown that he is still a useful fourth seamer.

There are two better options. One is to bring back Broad and put him in charge. He’s got the grasp of the game, the gift of the gab, the fire in the belly. And, as we know, he tends to be at his best when he has just been spurned.

The other is to send for a specialist, a captain who knows what he is doing and has already made one England team a lot better: Eoin Morgan. You could make room for him by sacrificing Ben Foakes and handing the gloves back to Jonny Bairstow, which would be tough on Foakes but fine for the team.

Morgan’s presence, his calm hand on the tiller, would make a huge difference. For the first time since Strauss himself stepped down in 2012, England would have a captain with some authority.