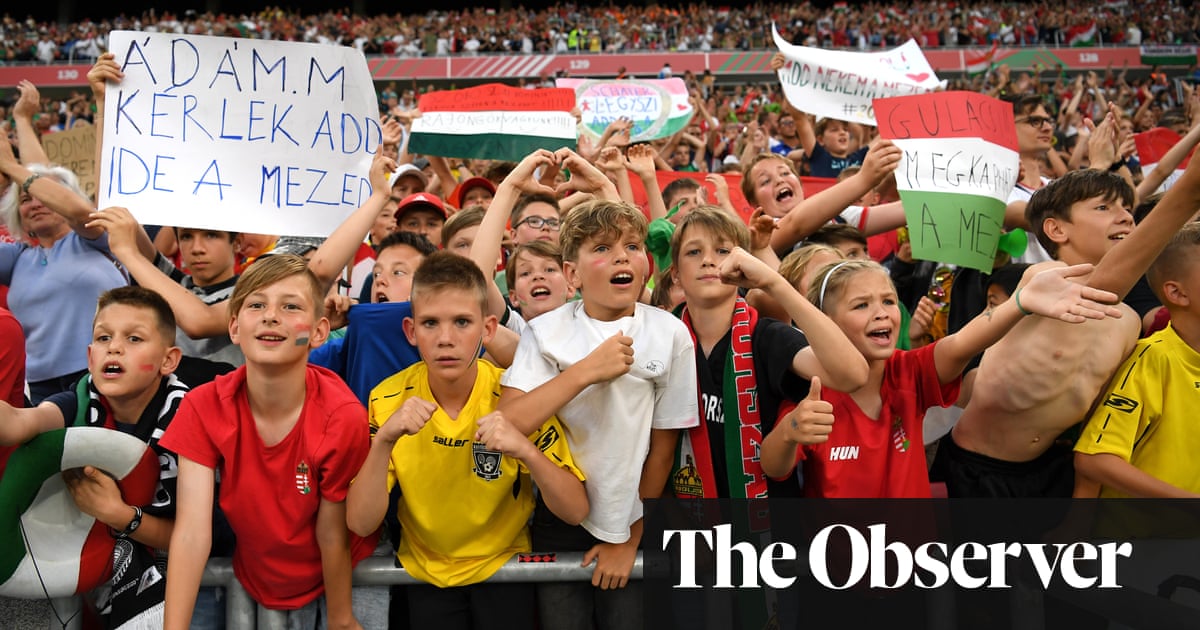 Child’s play? Anything but. England had toyed with Hungary amid the most unpleasant circumstances in September and might have expected a repeat in front of more than 30,000 energised youngsters. But a highly unusual setting brought what, by recent standards, was a thoroughly singular outcome: a no-show from Gareth Southgate’s players and a ripple in what had been a largely smooth path to Qatar.

England went through the motions, as players facing four games in the immediate aftermath of an unforgiving domestic season might. Their opponents strained harder across all departments.

In the matchday programme, the section dedicated to Hungary’s visitors was adorned with mini profiles of English national treasures. The list may not have constituted a fantasy dinner party lineup but contained something for everyone: Michael Owen; Sir Alf Ramsey; Howard Webb; the Queen; the singer Alfie Templeman; fish and chips. At full time it was tempting to suggest their boys had taken one hell of a beating, if not a battering, although the latter might have been close if Andras Schafer had doubled the margin of victory with a sitter.

England had never played to such a shrill, youthful and multicoloured backdrop. A more familiar sight at Hungary’s home games is the black-clad mass of ultras behind the goal, named the Carpathian Brigade, whose misdemeanours during Euro 2020 brought this game’s staging under special measures. This time pockets of minors wearing lime green, yellow, blue, whatever stripe represented their school or club, occupied those spots along with their accompanying adults.

Any sense of menace was dialled down close to zero, the scenes outside resembling arrangements for a summer camp rather than a fixture with unsavoury recent history. Yet there was still a grim reminder that a society’s sicknesses are all too easily transmissible to its young: England were booed when taking the knee and that reaction, on its own, should intensify questions around the logic of staging a behind-closed-doors fixture that was nothing of the sort.

A lone England flag flew briefly, for some reason, in the lower tier: beneath the gauze that, covering a section of seating, read “Hatred is not in the field of play” in Hungarian. But the away side were otherwise alone and that need not have been too vexing. They are five months from a World Cup to which traditional supporters may not flock, in a country with little football culture of its own. Nobody knows how the atmosphere will feel in Qatar but this, enthusiastic yet vaguely distracted and powered by screeching vuvuzelas, felt analogous at times to the one-note buzz of a tournament group stage game.

That changed whenever Hungary burst into life, which turned out to happen regularly. The assembled children could, the local FA president Sandor Csanyi had suggested, take learnings for life from the role models on the field. Everyone present felt educated, though, when the wing-back Loic Nego volleyed an angled pass of improbable ingenuity from which Dominik Szoboszlai almost scored. In moments like that the roof of this half-full arena almost lifted; the octave pitch would have left the scale had Adam Szalai beaten Jordan Pickford from inside the centre circle rather than shoot a foot wide.

By contrast England were slow, ponderous, never quite disastrous but rarely capable of operating beyond the methodical. James Justin, who departed at half-time, was given numerous headaches on his senior bow by Nego, a 31-year-old who plays for the local league’s fourth-placed side Fehervar. It was his replacement, Bukayo Saka, who produced England’s brightest moment after a scorching run and saved effort that nobody in white came close to emulating; leaden and too readily exposed, they never looked close to turning the screw.

There had been more attention placed on Jarrod Bowen, who had come off a pin-sharp season with West Ham. Bowen did as he usually does: refusing to go missing during an individual or collective off-day, a trait that endears him to managers and can compensate for the fact his technical qualities rarely soar above the mean. Volleyed half-chances at either end of the game highlighted that propensity; as Southgate pointed out afterwards, by the close he had taken most of the side’s shots. In truth it was thin gruel; for all their debutant’s willingness, England never got started.

They had nobody with the grace and craft to match Szoboszlai, whose penalty came after a Reece James blunder that typified their afternoon. Szoboszlai is Hungary’s modern success story: a sublime talent who came through the relatively modest Fonix Gold academy before shuttling through the Red Bull machine to Bundesliga stardom. He is still only 21: if the budding footballers who roared him off the pitch took one example from their evening out, his would be a fine place to start. For England, the lessons are rather sterner.