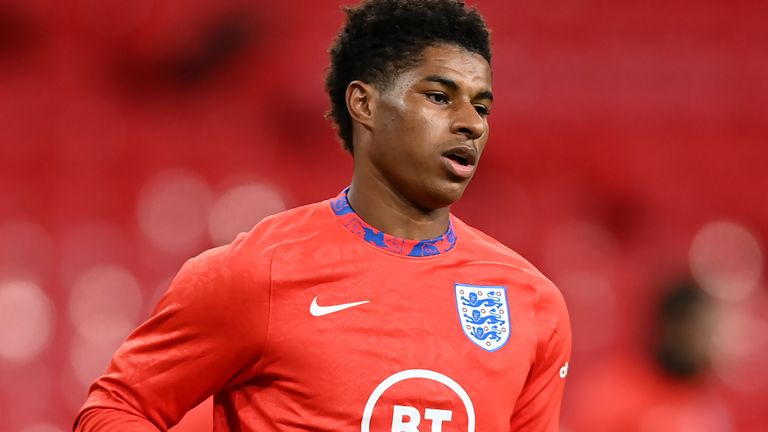 England begin their World Cup 2022 Qualifying campaign with the visit of minnows San Marino to Wembley Stadium on Thursday night in qualification Group I.

Top spot will guarantee progress to next winter’s tournament in Qatar, with Poland and Hungary the highest-ranked of their opponents to be faced twice between now and mid-November.

Gareth Southgate’s men tackle a trip to Albania and the National Arena in Tirana on Sunday before Poland play England at Wembley on March 31.

Reporting from England’s St George’s Park training base, Dorsett told Sky Sports: “There was bad news for England and for Gareth Southgate on Wednesday when neither Marcus Rashford nor Bukayo Saka took part in the final training session they will have before taking on San Marino in their opening World Cup qualifier.

“The formation and tactical work was done during that session, with both Rashford and Saka missing out. Rashford’s foot injury means he hasn’t been able to train with the rest of the group but he is training on his own in the gym.

“There’s hope from Southgate that he’ll be able to play some part later in the camp with the two other internationals coming up. Saka hasn’t joined up with the squad at all yet – he’s still with Arsenal, and is facing some personal training and fitness work on his hamstring problem.

“It remains to be seen if he’ll be able to join up with the squad at some point as well, but as things stand he’s not here at St George’s Park.”

Will this open the door for Lingard?

“Both Rashford and Saka were named among the five attacking options he had in his original squad, and you have to say it gives Jesse Lingard a really good opportunity if he impressed in training to force his way back into that England starting XI.

“The last time he started a game for England was back in June 2019 during the UEFA Nations League, but he’s been in such good form for West Ham since going on loan there. He looks sprightly and full of beans at training on Wednesday morning.

“There could be the option of Phil Foden and Mason Mount in that wide-left position as well. The fact that Mount is doing the pre-match news conference is a pretty clear indication that he will play. We don’t know yet of course whether he’ll be in the middle of midfield or in a wide position.

“Southgate could still be weighing up and juggling his options, but Lingard and Mount are two strong possibilities for the England manager. I still fully expect it to Harry Kane up front with Raheem Sterling the other member of a front three named by Southgate on Thursday.

Will Southgate experiment with system?

“In any normal circumstance, this is the sort of game that he might have experimented with, but you have to bear in mind that there are only five games, including these three World Cup Qualifiers, before England start their Euro 2020 campaign on June 13.

“I’m almost certain it will remain as three at the back and I’m pretty sure he’ll go with at least one defensive midfielder in Declan Rice or Kalvin Phillips – probably Rice. You expect two of those centre-backs to be John Stones and Harry Maguire as they’ve been in such good form for their clubs.

“Will the third one be Conor Coady? Will it be Tyrone Mings or will it be Eric Dier? Stones is very much back in the England fold and Southgate has been extremely impressed by how he’s been playing this season for Manchester City.

“He wants his players to be playing in the biggest games, and Stones is doing that and performing well so he’s got a very good chance of making the starting XI, as indeed does Luke Shaw.

“It’s a battle between him and Ben Chilwell for a starting berth at left wing-back, and I’d expect both of them to get game time over the next three matches. Southgate was glowing in his tribute to how well Shaw has been playing for Manchester United this season, praising his defensive qualities as much as his ability going forward.

“Maybe Chilwell, by his own very high standards, hasn’t been at the very top of his game for Chelsea of late so Shaw could get the nod in that position.

“Southgate has a big decision to make at right wing-back, with Reece James, Kieran Trippier and Kyle Walker all available there. It could be any one of those three and I wouldn’t like to second guess.

“Certainly, there are still some selection dilemmas for Southgate before he names the starting XI on Thursday evening.”

Who will start in Pickford’s absence?

“There’s a key decision that Southgate has to make – who is the first-choice goalkeeper in the absence of Jordan Pickford? West Brom’s Sam Johnstone has been called up for the first time, and you couldn’t take the smile off his face when he spoke to the media on Tuesday.

“He’s delighted to have his first call-up at the age of 27, and he’ll be hoping to get some game time but the initial discussion is whether it will be Dean Henderson or Nick Pope who starts the game against San Marino.”

‘Not the time for England experimentation’

Former England forward Paul Merson says upcoming fixtures are not the right time for manager Gareth Southgate to be experimenting.

England’s World Cup qualifiers against San Marino, Albania and Poland are the last fixtures they will play until June, when they have two scheduled warm-up matches before starting their European Championships campaign.

“Gareth needs to nail this team down and how we’re going to play,” Merson said. “I don’t think we’re at a stage now, with the tournament starting in June, where we’re experimenting and giving caps out.

“I think we need to get a steady team and then maybe with 15/20 minutes to go, if we wrap these games up and get players on to give them a bit experience, I don’t think we have time for experiments now.

“These European Championships, they’re just as hard to win as the World Cup, if not harder. If you look at the world, there’s only maybe only Brazil or Argentina that can win a World Cup that aren’t in Europe.

“Every now and again, you’ll get a couple of ‘gimme games’ in the World Cup, but there aren’t any of those in the Euros. If you lose your first game, you’re up against it and we need to hit the ground running.”