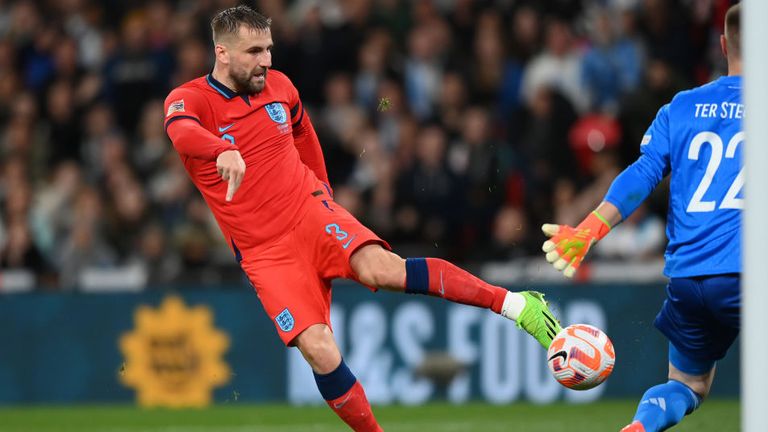 Luke Shaw was England’s standout player in a thrilling 3-3 draw against Germany, but Harry Maguire and Nick Pope struggled at Wembley.

A game that exposed Pope’s weakness with distribution even before his late error. Looked nervous under the German press when collecting back passes, with his spilled save for Kai Havertz’s second goal capping a poor evening. Unlikely to oust Jordan Pickford anytime soon.

A triumphant return to the England XI. Defended superbly on a busy left flank and tried to bring the ball out from the back whenever he could, especially when England were struggling. Capped off his performance with a well-deserved goal.

Made some good blocks when needed but also made some questionable passes at times. Couldn’t quite follow up his superb return to the XI from Milan, but looks to have booked his place in the World Cup squad.

Kept his nose clean until he gave away a clear penalty. An incredibly reckless tackle for such an experienced player, before losing possession far too easily in the build-up to Germany’s second – moments that will only intensify the spotlight on him.

Really unfortunate to be injured late in the first half after starting an England attack from deep in defence – something he did well in his 37 minutes. His long pass for Sterling early on was a thing of beauty too.

Much better from James, who looked far more comfortable as the right wing-back in Southgate’s back three. Had a poor moment in the first half when his wayward pass set Germany away, but little came from it. Otherwise, a solid display.

England’s midfield machine delivers once again. Did not look outnumbered in the middle of the park alongside Bellingham despite being up against a talented German trio of Ilkay Gundogan, Joshua Kimmich and Jamal Musiala. The pair have arguably secured their spots as the starting midfield duo in Qatar.

Another impressive performance across the park from the teenager, who is building up a good partnership with Rice. Had a few wayward shots, but won the England penalty with his tenacious play.

Linked up nicely with Sterling and Kane in spells going forward, but would have wanted to influence the game more. However, some of his skill reminded you just what a player he is.

Played it safe early on, but began to come to life as England’s attacking play opened up. Reliable as ever from the penalty spot and remains Southgate’s first name on the teamsheet.

A far better performance, with his speed and movement down the left a handful for Germany in the first half. Had three great chances to score, but was also lucky not to give away a penalty.

Not much to shout about from Walker’s performance, but will give him a platform to build on after a terrible time in Milan.

A brilliantly taken goal from a player that needs some goals and assists to set him up for the season. A confidence-boosting cameo with lots of other good moments.

After struggling at left back in Italy, Saka looked far more comfortable on the right wing. Provided a beautiful assist for Mount’s goal.