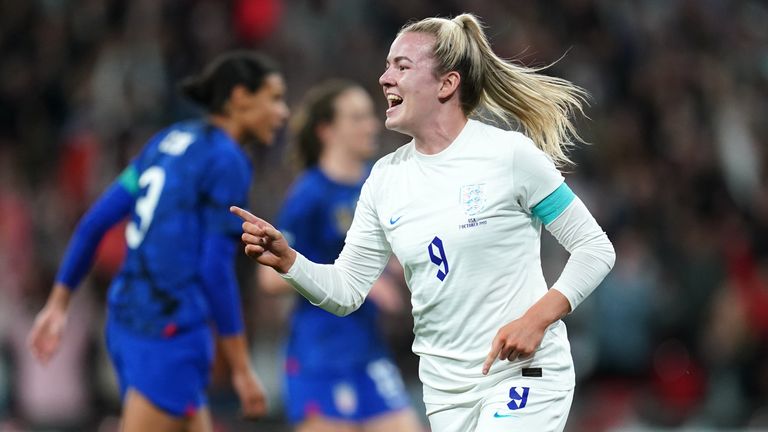 England tested their credentials ahead of next year’s World Cup, beating the current holders the USA 2-1 in an entertaining Wembley encounter.

Both England and USA players wore teal armbands to “stand in solidarity with sexual abuse victims” in the National Women’s Soccer League (NWSL), and ahead of the game, took a group picture with a ‘protect the players’ banner.

It was an action-packed first half that was fit for the 76,893 fans inside the stadium. Sophia Smith showed early glimpses of her brilliance as she drew a save from Mary Earps, before Beth Mead’s shot from outside the area was straight at USA goalkeeper Alyssa Naeher.

England made the first move in the 12th minute with a lightening quick counter-attack. It all came down the right wing as Lucy Bronze found the run of Mead, who then sent a darting cross into the area. Alana Cook’s sliding tackle was unable to keep the ball from finding Lauren Hemp, as she smuggled the ball past Naeher.

Just before the half an hour mark, USA equalised with a wonderful strike from Smith. Georgia Stanway was caught in possession by captain Lindsey Horan, who poked the ball through for her team-mate. Smith then easily turned towards goal before slotting home her tenth goal of 2022.

Shortly after and VAR intervened for the first time. Hailie Mace was penalised for a high boot, catching Bronze in the head – although she escaped a red card for the foul. However, England were awarded a penalty, which Stanway expertly dispatched to see the Lionesses back in front.

More VAR drama was to follow and again, the USA were penalised. A swift break was finished off by Trinity Rodman at the back post, with the impressive Smith again involved. However, VAR checked for an offside in the build-up, with the equaliser eventually chalked off by the tightest of margins.

Player of the match: Lauren Hemp.

The second half was a far cagier affair with the sides trading blows at each end, but with little rewards. Bronze’s fierce drive from range skimmed the side of the net, with Megan Rapinoe and Rodman also seeing efforts wide. Stanway’s blistering shot also flew past the post.

The USA would have been glad to see the back of VAR by the end of the game as they had a penalty overturned in the 81st minute. The referee pointed to the spot as Hemp was judged to have handled the ball. However, replays showed the ball clearly hit her on the backside and was soon overturned.

Despite some nervy moments, England saw out the game to take a morale-boosting win which extends the Lionesses unbeaten run to 23 matches under Sarina Wiegman ahead of Tuesday’s friendly against the Czech Republic in Brighton.

“It wasn’t perfect, but there is reason for cautious optimism following England’s latest conquest. The psychological edge that comes with beating such a powerhouse is alone a tangible triumph. Sarina Wiegman’s remarkable unbeaten run as manager lives on. Lionesses fans will hope that it never ends.

“US head coach Vlatko Andonovski was quoted as saying he “wouldn’t mind meeting [England] again in the final.” He was referring to the World Cup final. A clear indication of the growth this side has achieved under Wiegman. They have an air of legitimacy about them. As if onlookers now recognise and respect their pedigree.

“Of course that is the upshot of winning a major tournament. But more than that, England are commanding acclaim based on the consistency of their delivery. They are a different animal under Wiegman. Ruthless, but also immensely difficult to beat. By full-time the visitors’ possession share had plummeted to 31.3%, their lowest average since 2016. 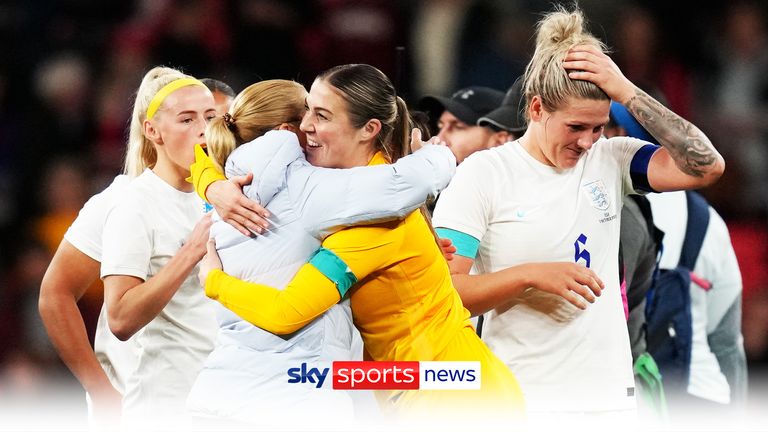 Sue Smith says the Lionesses’ 2-1 win over world champions USA will give them a huge confidence boost ahead of the World Cup.

“Even without captain Leah Williamson and chief goal threat Alessia Russo, England managed to find a way to dominate the USA. It was the first time they’ve managed it since 2017 – and only their third time ever in 19 attempts. The gap has certainly closed. Some may argue that it no longer exists.

“Needless to say, it was a poignant night for women’s football in a game that represented more than just 22 players on a pitch. The Lionesses rightly demonstrated their solidarity with the USA squad by wearing teal armbands, while also posing with a banner that read “protect the players” before kick-off. But there was no love loss after the whistle went. England had a point to prove. And they proved it expertly.”

“It was a very intense match, a very open match. Very competitive, which is what we expected, and fast too. We were really playing to score goals but they were also doing that.

“We were more in possession than they were, but when they got the ball they looked dangerous. At the end, we created more chances than they did, so we can take lots of things from this. England’s Chloe Kelly says she was happy to be back at Wembley three months on from their Euros win as they defeated the USA 2-1.

“We don’t win a World Cup now, but it’s really good to have this moment and this game in this environment with our people around cheering for us. It was a good measure, I think the Euros was a good measure too.

“We all saw that the European Championships was such a high level. Actually, the whole women’s game is developing and that’s very exciting to be a part of. But then it’s good to have a test against the USA because they have won so many things over years and years so lots of respect for them, but hopefully we’re catching up.”

“This game is important preparation for the World Cup. There is a reason we played it so far out. We wanted to have enough time to fix the things that get exposed. It was a great learning opportunity.

England will be back in action on Tuesday when they take on the Czech Republic in another international friendly at the Amex Stadium in Brighton; kick-off 8pm The USA will also play on October 11 when they travel to Spain; kick-off 7.30pm.