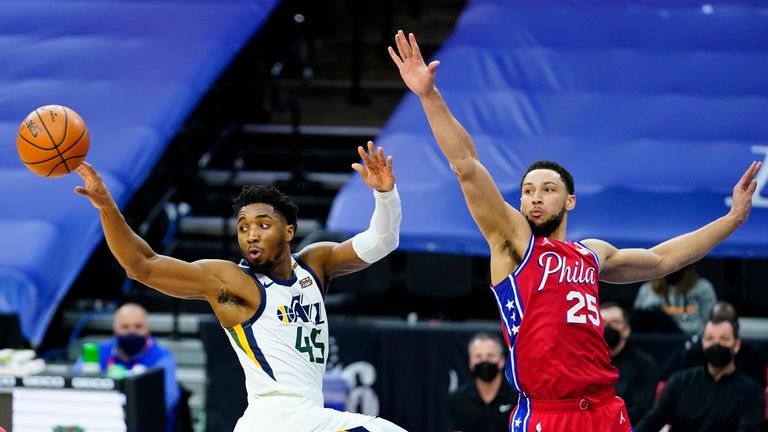 Joel Embiid scored 40 points and grabbed 19 rebounds to lift the host Philadelphia 76ers past the Utah Jazz 131-123 in overtime.

It was the fifth time this season that Embiid posted at least 40 points and 10 rebounds in a game.

Tobias Harris scored 11 of his 22 points in overtime to go along with 10 rebounds and Ben Simmons added 17 points. Seth Curry contributed 14 and Dwight Howard and Shake Milton had 12 each.

The Sixers capitalized on a late 8-0 run in overtime to seal the victory.

Donovan Mitchell led the Jazz with 33 points and eight rebounds but was ejected in the final minute of overtime after receiving his second technical foul.

Bojan Bogdanovic and Mike Conley added 18 apiece and Joe Ingles had 16 for the Jazz, who hit 21 of 44 three-pointers.

But Embiid dropped in a trey with 3:56 remaining to give the Sixers a 107-106 lead. Mitchell responded with a three-pointer and Utah led by two.

James Harden recorded his eighth triple-double of the season in his return to Houston, leading the visiting Brooklyn Nets to a 132-114 victory over the downtrodden Rockets at the Toyota Center.

Harden finished with team-highs in points (29) and assists (13) while adding 10 rebounds and three steals, two nights after becoming the first player to record a 30-point, 10-rebound and 15-assist triple-double without a turnover,

Harden committed eight turnovers against Houston, a slight blemish on his resume. But he orchestrated the Brooklyn offense masterfully, and when the Rockets cut what was a 23-point, third-quarter deficit to 105-97 on a John Wall 21-foot jumper with 7:55 left to play, Harden responded with a pair of three-pointers to stifle the rally.

Wall finished with a season-high 36 points on the heels of his 32-point effort on Monday. Victor Oladipo added 33 points, including 18 in the third quarter, for the Rockets, but that tandem could not prevent Houston from lugging a 13-game losing skid into the All-Star break.

The Rockets dressed only eight players against Brooklyn, and their small line-up was ravaged on the boards. Brooklyn posted a 53-37 rebounding advantage and received a combined 26 points and 18 rebounds from centers DeAndre Jordan and Nicolas Claxton.

TJ McConnell collected 16 points, 13 assists and a franchise-best 10 steals to lift the visiting Indiana Pacers to a 114-111 victory over the Cleveland Cavaliers.

McConnell, who made all eight of his shots from the floor, set an NBA record with nine steals in the first half. The league record for steals in a game is 11, set by Kendall Gill in 1999.

Malcolm Brogdon scored 29 points and Domantas Sabonis added 18 for the Pacers, who salvaged the finale of a four-game road trip by snapping a season-high-tying four-game losing skid. Indiana have won six of the last seven meetings against Cleveland, including a 119-99 decision on New Year’s Eve.

Collin Sexton recorded 32 points and 10 assists for the Cavaliers, who squandered a 17-point lead in the second half and saw their season-high four-game winning streak come to a halt.

Cleveland’s Dean Wade and Jarrett Allen each scored 17 points and Darius Garland added 16 before sustaining a left groin strain in the third quarter. Garland did not return.

Wayne Ellington scored his season-best 25 points in going 8-for-11 from three-point range as the visiting Detroit Pistons defeated the depleted Toronto Raptors 129-105 in Tampa.

Two players had triple-doubles for the Pistons, the second time in one game in team history.

Rodney McGruder and Saben Lee each contributed 20 points for the Pistons and Svi Mykhailiuk had 17 points.

Terry Rozier scored 31 points and Gordon Hayward returned to Charlotte’s starting line-up as the Hornets picked up their most lopsided win of the season, 135-102, over the host Minnesota Timberwolves.

Rozier netted 15 of those points and hit four three-pointers during a 21-2 third-quarter surge that broke the game open for Charlotte, who later led by as many as 38 points and handed the Timberwolves their ninth consecutive defeat.

Hayward finished with 23 points, nine assists, five rebounds and five steals in 31 minutes after missing Charlotte’s prior two games with a bruised hand.

The loss dropped Minnesota to 0-5 since Chris Finch replaced Ryan Saunders as coach, and the Timberwolves allowed over 130 points for the third time during that span. The Wolves are also 1-11 since Towns returned to their line-up.

LaMelo Ball, who was recently named the Eastern Conference’s Rookie of the Month, finished with 19 points, seven rebounds and five assists. Ball fell a point short of his sixth consecutive 20-point game. Malik Monk had 18 points and Miles Bridges scored 13 off the bench for the Hornets.