Elizabeta Ejupi: Fleeing Kosovo to freedom on the pitch 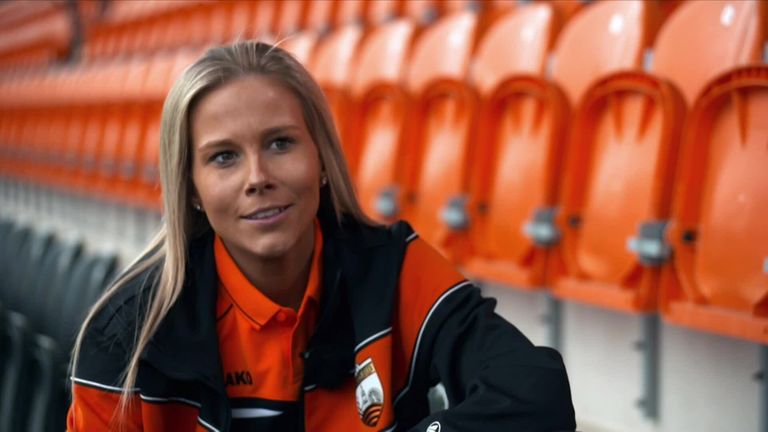 Elizabeta Ejupi has been a professional footballer since the age of 16, but the Beautiful Game was not always part of her parents’ plans for her – at an early age it was simply about survival.

Ejupi’s family were forced to travel more than 1,600 miles to London to escape the increasingly volatile situation in her birthplace of Kosovo, which was under a cloud of war between the Federal Republic of Yugoslavia and the NATO-backed Kosovo Liberation Army.

The conflict started in February 1998, worsening before ending in June 1999, making it incredibly dangerous for everyone who lived in the region.

“It wasn’t a nice war, there was a lot of genocide,” London City Lionesses midfielder Ejupi tells Sky Sports News as she reflects on what her parents had told her about living in a warzone.

“A lot of people have [also] been through similar things and we need to talk about it to make it stop and not allow it to go on anywhere else.”

With her family fleeing to London when she was just three, Ejupi’s transition was not easy, with football quickly becoming a solace as she adapted to new surroundings.

“It was obviously difficult, mainly learning a new language but I think football made that easy,” she says.

“Just playing football allows you to communicate with people and just get to know people.”

On the estate ‘you have to earn your spot’

Playing street football in South London aided Ejupi’s development in the same way it has helped some of the game’s biggest stars, including Callum Hudson-Odoi, Jadon Sancho and Wilfried Zaha.

“Playing on the streets, Cherry Orchard, this estate [in Charlton in the Royal Borough of Greenwich] is where I fell in love with it,” she explains.

“I made so many friends and learned a lot about myself being a female footballer. On an estate like this you kind of have to earn your spot.”

As she honed her football skills growing up, it became clear Ejupi was a talented player. And it was from the very estate she grew up on where her journey into the professional game began.

“Pauline Cope (the former Charlton an England goalkeeper) was a professional player at the time,” Ejupi says.

“She saw me in my primary school and said come and trial at Charlton. I was scared, obviously. I didn’t think of getting into a team at that age.

“When I went there, playing 11-a-side, it was completely different. I thought I have so much time here. Here (playing in the cages) you don’t get much time, because someone is always on your case.

“I think you learn so many different skills in a cage that you can transfer into an 11-a-side pitch, it gives you a lot of confidence. When you do a really good skill you feel like they accept you, and you feel great.”

Ejupi won a London Youth Games bronze medal as she progressed from the academy to Charlton’s first team and has since had spells at Nottingham Forest, Notts County and Aston Villa.

“Growing up we never did it for the money, we just did it because it was what we loved to do,” the 27-year-old added.

“It was frustrating growing up seeing your male friends [who play the game] and they have all the facilities. Not that you let it bother you but you did think ‘why can’t this be me?’ It should be equal.”

Ejupi opted to sign for London City Lionesses in 2019 and was attracted to the team by their sole focus on a dedicated women’s team.

“It is a really ambitious club,” she says.

“When I heard it was a standalone team, the vision it had and the women that work there [I was impressed]. The chairwomen really wants to push the game forward.”

Away from football Ejupi works with the XLP social project catering for disadvantaged youngsters. It’s something that is close to her heart as somebody keen to inspire girls and keen to give back to the community.

“I think it is important for local teams and local clubs to bring people out to run sessions and see if there are any girls they can pick up and bring into trials, it’s so important for girls to come to train and practice,” she added.