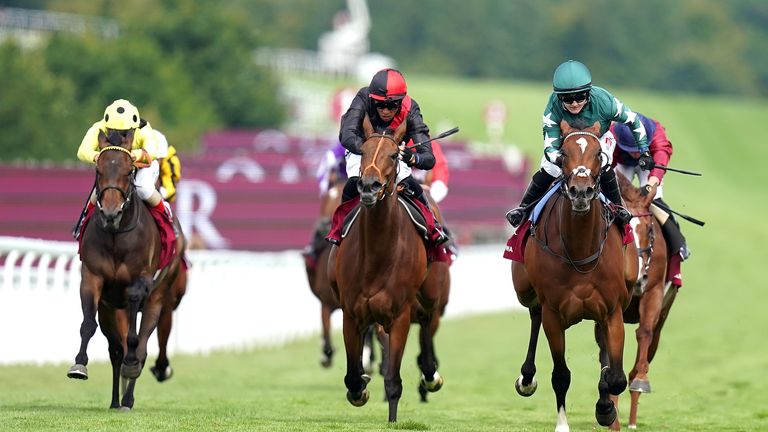 Doyle, who is the first female rider to win the Nassau Stakes, celebrated her first Classic success on the John and Thady Gosden-trained filly in June this year.

Giving her mount a more patient ride than her Chantilly success, Doyle settled 5/6 favourite Nashwa at the rear of the eight-runner field – Ville De Grace was withdrawn at the start – keeping a close eye on her rivals ahead as Dreamloper took them along.

Andrea Atzeni, on Fonteyn, came to join Dreamloper up front but focus soon switched to Doyle and Nashwa as the pair made a striking move down the outside.

Richard Hannon’s 40/1 shot Aristia delivered her challenge, with a late charge also from Doyle’s husband Tom Marquand on Lilac Road, but Nashwa proved a class above to stretch away by a length and three-quarters.

“It’s pretty awesome. She gave me some feel then,” Doyle said. “It’s unreal, Nashwa is a horse of a lifetime and if it wasn’t for Imad Al Sagar (owner) giving me this opportunity, I might not have enjoyed days like this.

“We were drawn badly today. I rode her aggressively in France as we had a good draw so I wanted to hold my position. Today, in between her work from her previous run, she knows what she is doing here. So I didn’t want to light her up and ride her from a pace angle, so Mr Gosden told me to ride her that way today.

“I came down the hill with a double handful and she travels very well, but she takes a while to hit top gear. I was conscious about keeping her balanced down the hill.

“This is her perfect trip (10 furlongs). She has a high cruising speed and sees it out very well. She is push button and you can ride her anywhere which is really nice.”

Hollie Doyle is a star. She has an incredible work ethic… she is a credit to anybody in any line of work.

John Gosden said: “She’s won with a bit in hand, but she is a grand filly who is improving all the time. Her owner-breeder Imad Al Sagar keeps pictures of her and she has changed a lot this year alone.

“I think next time we might have to put a pacemaker in. She is versatile to do that from off the pace. She is a talented filly and I think we will stay in against the fillies in something like the Prix de l’Opera. I don’t want to rush taking on colts this year, maybe next year.

“We tried over a mile and a half at Epsom and she didn’t quite get the trip. She’s won the Diane and the Nassau so you can never ask for more from a filly. She has got the frame to improve again in the autumn and next year.”

He added: “Hollie Doyle is a star. She has an incredible work ethic. As a rider, she is very savvy and strong with great balance. She has the most wonderful personality and she is so applied and focused – she is a credit to anybody in any line of work.”

Richard Hannon was thrilled with the performance of Aristia in second place. “She is always a filly that kind of runs massively above what you were expecting,” he said.

“For some reason she did not come into her coat until well after Ascot, we have got her back right and she looks a million dollars. She ran a super race and we have got the rest of the season to look forward to.

“She has finished second to an extremely good filly there. Everything is an option now. She is a filly with an awful lot of scope, we are delighted with her today.

“There are some lovely races coming up and I would love to hope she will stay in training for next year.”

Doyle quickly made it a double on day three of the Goodwood Festival, teaming up with trainer Michael Dods for the first time to great effect with Prairie Falcon (14/1) in the Jaeger-Lecoultre Nursery Handicap.

Clive Cox’s Get Ahead came with a powerful run down the usually unfavoured middle of the track to win the five-furlong World Pool Handicap.

Sixth in the Queen Mary last season, she had been out of luck in five outings this campaign but returned to winning ways under Adam Kirby at 7/1.