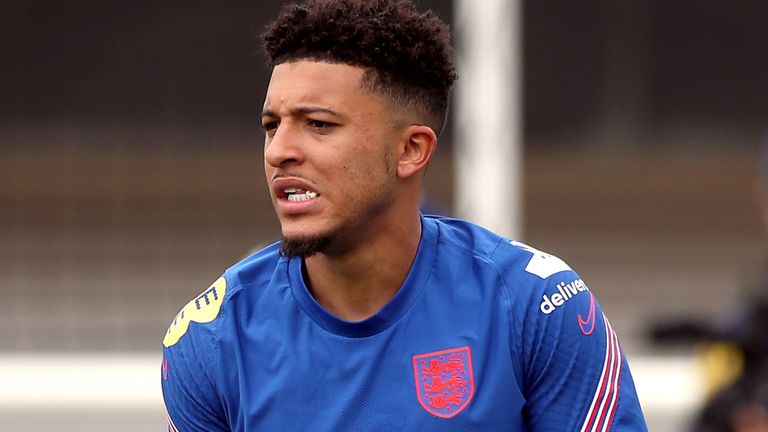 Manchester United have agreed a £73m deal to sign Jadon Sancho from Borussia Dortmund, the German club have confirmed.

The Bundesliga side made a stock exchange announcement on Thursday morning, which also confirmed Sancho has agreed personal terms with United, with the transfer set be completed subject to a medical.

“The player Jadon Sancho is about to move from Borussia Dortmund GmbH & Co. KGaA to Manchester United Football Club Limited,” the announcement said.

“Both clubs and the player reached an agreement on this today. If the transfer is realised, Manchester United will pay BVB a fixed transfer fee of EUR 85.0 million.

“The contractual details now have to be coordinated and documented. The formal processing of the transfer is also subject to the successful completion of all necessary medical tests and examinations, a coordination procedure with the player’s previous club and the proper and timely processing in accordance with the provisions of the FIFA Transfer Matching System.”

Dortmund’s asking price at the start of the window was in excess of £85m and the deal is also £35m less than the £108m valuation last summer.

Sancho is unlikely to officially join United until England’s participation in the Euros is complete, at which point a medical will be completed.

The forward’s contract at Dortmund runs until the summer of 2023 and they do not want to risk him entering the final year of his deal.

The Bundesliga club are actively looking at replacements, with PSV’s Donyell Malen and Noni Madueke two players they have extensively scouted.

Sancho’s former club Manchester City retain a sell-on clause and are set for a cash windfall from their cross-city rivals should the transfer go through.

The 21-year-old came through Watford’s academy before joining City in 2015, but he moved on to Dortmund in 2017 after declining the offer of a new contract at the Etihad.

Sancho swiftly established himself as a key player at Dortmund, and has scored 50 goals in 137 appearances for the German club.

It could be argued Ole Gunnar Solskjaer’s side have more pressing needs in other areas. Many fans might prefer a central defender. But Sancho has emerged as one of the world’s most exciting young players in recent years and it is easy to understand why United are so determined to finally get their man.

Manchester United will host rivals Leeds United at Old Trafford on the opening weekend of the 2021/22 Premier League season.

United face a possibly season-defining run of games in October and November, which starts with a trip to Leicester on October 16, the first showdown with Liverpool at Old Trafford on October 23, and a visit to Tottenham on October 30.

November 6 marks the first Manchester derby of the season as champions Manchester City travel to Old Trafford, before United head to Champions League winners Chelsea on November 27 before rounding off the month by hosting Arsenal on November 30.