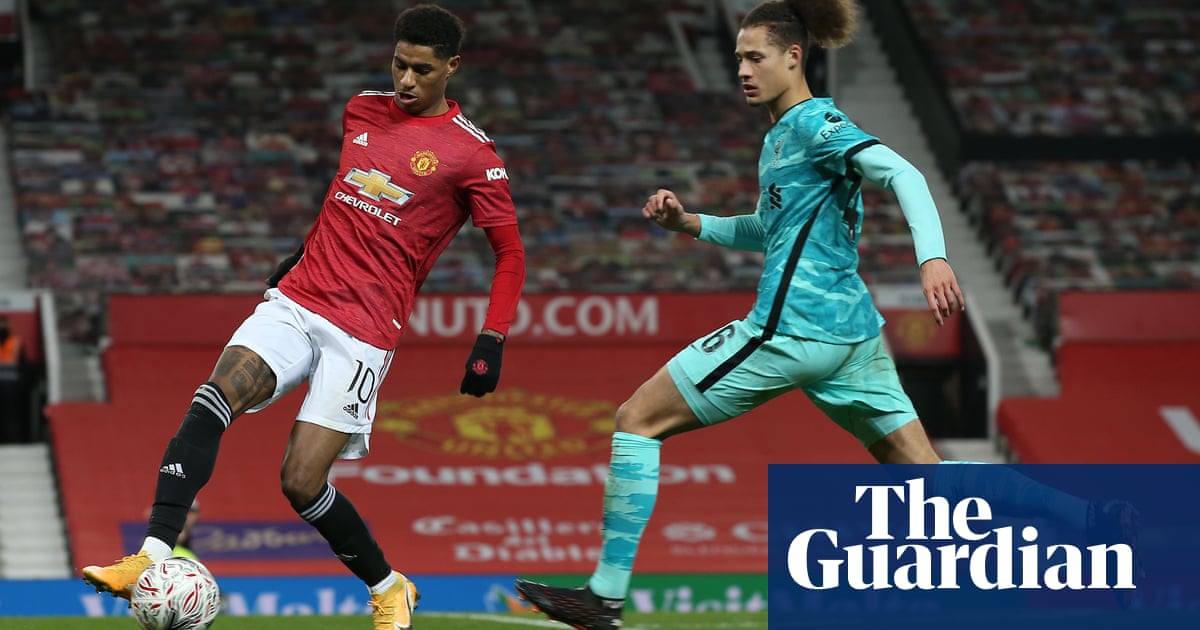 Three minutes into the second half at Old Trafford something happened that was simultaneously startling, avoidable, unfortunate, and also crushingly inevitable. Manchester United’s second goal in this fun, highly watchable 3-2 FA Cup fourth-round win will be cast as a the fruit of a Rhys Williams mistake.

Correctly so: it was a horrible mistake. Rumbling back to cut out a diagonal pass from Mason Greenwood, Liverpool’s centre‑back scuffed a miskicked clearance that ran straight into Marcus Rashford’s path, leaving him a clear run on goal.

Rashford finished beautifully. Williams looked distraught, although to his credit he showed great resilience for the rest of the game and actually improved after that point, when he might have fallen apart.

But United were 2-1 up, went on to win 3-2, and that scuffed clearance will become a staging point in the archive reel of this game and a haunting little set piece for a teenager exposed in the most glaring of spotlights.

It is often said that football matches are decided on details, not least the kind of Cup tie United and Liverpool produced on Sunday, with five excellent goals and enough chances for the score to have swung the other way. But details also come from somewhere too. Details have cause and effect and a chain of command behind them. And only the hardest heart could lay the blame for that mistake at Williams’ door.

Anatomy of a scuffed clearance: how deep do you want to go with this? Zoom out just a little and this was a moment built out of bad choices, wrong turns, neglected red flags along the way. This was a scuffed clearance that was there when the team sheets dropped. It was there in the buildup. It was there last week, as Liverpool struggled with the knock-on effects of shifting their best midfielders into defence.

That scuffed clearance was present in ghost form throughout the first half, flickering just behind the action, rattling its chains. It is, in its own way, an insight into how exactly Liverpool, the strongest club team in the world this time last year, have got themselves into a position where the season is contracting around them, trophies being chalked off, the FA Cup following the League Cup and a six-point drop off the top of the Premier League.

Liverpool’s owners don’t want to pay over par for a match‑ready centre-back in the transfer window. This has not been the model. The model has been smart, considered, value for money. The model has worked.

But the game never stays still. Breaking that pattern, signing the best centre-back in the league, validated the rest of the model. Buying Virgil van Dijk helped make buying Andy Robertson such title-winning good sense. One doesn’t happen without the other. And the stitches are starting to show back there.

With Joël Matip and Jordan Henderson injured, Williams was not just the natural choice, but the only choice to play at right-sided centre-back against the most effective left-sided combination in the Premier League. Rashford and Luke Shaw have a supreme understanding right now.

Williams, by contrast, has made one Premier League start. He’s 19 years old, but a young-looking 19. At the same age Wayne Rooney had the physique of a grizzled Ukrainian middleweight boxing champion. Williams moves around the pitch like a slender sapling, bending with the wind, looking always in need of a strong bamboo switch to keep him upright.

He is good in the air. His defensive positioning is good. But one early run from Rashford demonstrated the alarming physical mismatch on show. Rashford is a sensational athlete, with a rare combination of speed, strength and lateral spring. Add in the purity of his movement, a man who seems utterly clear in his mind where to run, how to use the space on the right side, and it is a daunting challenge for any defender.

Let alone for Williams, who still has that rangy quality, and who looked utterly wide-eyed early on. United’s first goal also came from his side. With 25 minutes gone Paul Pogba produced a telescopic grab just outside his own box, taking the ball away from Roberto Firmino with an extendable right leg, then whirling on the turf to sweep it away.

The ball was funnelled out to Rashford on the left. As he took the ball, Mohamed Salah could be seen waving Williams back, taking the man himself, but also failing to close him down and leaving Williams lost in a zone of no influence, galloping back through the open green spaces like a calf cut loose from the herd. Rashford conjured up a perfectly flighted path that skimmed James Milner’s head and ran through to Greenwood, who finished expertly.

As the game wore on Williams managed to rein Rashford in a little. But he just isn’t ready for this, not to the levels required of the world club champions, of a team built to win every game, to steamroller the league.

He is instead a visible sign of something else; of an insistence on trying to game the game, of failing to fix the roof while the sun shines. And in the end the details will have their say, one way or another.