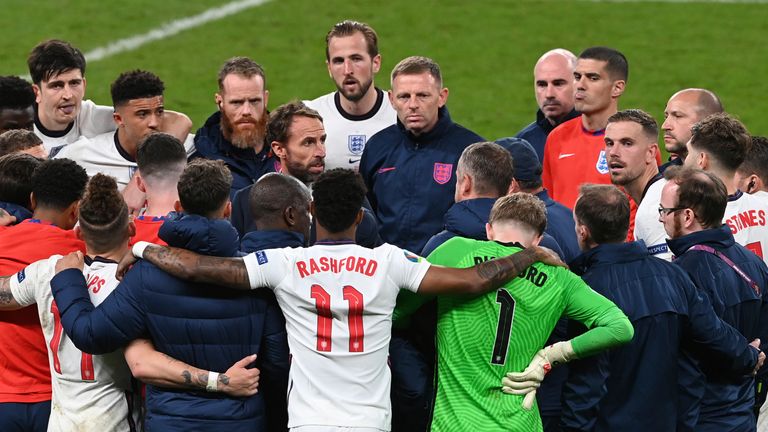 Gareth Southgate defended his England players following their shootout defeat to Italy, but was he right to enforce his list of five takers or should those with more experience have stepped up in shootout?

England’s defeat to Italy was in their first major tournament final in 55 years and they will hope to bounce back at the 2022 World Cup in 18 months’ time.

Southgate told his young side to hold their heads high after a historic summer came to a crushing end, but Roy Keane led the criticism of the overly structured selection approach, claiming Bukayo Saka should not have been given the task of taking their crucial fifth penalty.

Saka, 19, had to score to send the shootout to sudden death but his kick was saved by Gianluigi Donnarumma. The Italy goalkeeper had also saved from Jadon Sancho after Marcus Rashford had hit the post.

Southgate shouldered the blame for his side falling short in the shootout, revealing he selected the five takers based effectively on data drawn from practice at St George’s Park – a similar strategy which served England well against Colombia at the World Cup in 2018 and in the UEFA Nations League against Switzerland a year later.

When asked what he would say to Saka, Southgate replied: “That it’s down to me. I chose the penalty takers based on what we have done in training and nobody is on their own. We have won together as a team and it’s absolutely on all of us in terms of not being able to win the game tonight.

“But in terms of the penalties, that’s my call and totally rests with me.

“We had two [penalty takers] go off earlier in the game, so that’s why we made the changes that we did. We have tracked what they have done with their clubs over a long period of time and what they have shown in training as well so that’s the process that worked for us in Russia and the Nations League, but tonight, it has not quite worked.”

Jordan Pickford saved two in the shootout but still ended on the losing side. England missed three. So where did it go wrong?

So what does the data say about the takers?

During the 4-3 shootout win over Colombia in Russia, Harry Kane, Marcus Rashford, Kieran Trippier and Eric Dier all scored while Jordan Henderson’s miss did not prove costly.

The Liverpool midfielder also missed from 12 yards in England’s warm-up game against Romania after taking the responsibilities off the designated taker Dominic Calvert-Lewin – a decision which did not go down well with Southgate.

Southgate said at the time: “We had Marcus Rashford on penalties then James Ward-Prowse but both came off. We expected Dominic Calvert-Lewin to take it and I was expecting Hendo to go over to him and let him take it. We will pull rank next time.”

So it was perhaps not a surprise when Southgate elected to bring off his own substitute in order to bring on a more specialist taker ahead of the shootout in extra-time.

Interestingly, John Stones revealed last month he would have been the sixth taker in the victory over Colombia, had Dier not converted.

“That was a scary moment,” he said. “But I was ready because of this process that we’ve always talked about. It’s about making you as comfortable as possible in that situation. Because, unless it’s Harry (Kane) or the boys who take penalties for their clubs regularly, it’s a zone that we have not stepped into before.”

Stones also once took an audacious spot-kick in a pre-season tour of America with Everton back in 2013, scoring a Panenka, but let’s not compare these occasions; the final of a major tournament at Wembley was a far greater test of courage.

England secured third place in the Nations League in 2019 by overcoming Switzerland 6-5 on penalties, scoring all of their spot-kicks. Maguire, Ross Barkley, Sancho, Raheem Sterling, Jordan Pickford and Dier all found the net as England took bronze at the inaugural competition.

It is clear Mason Mount and Trippier were in Southgate’s thoughts for the spot-kicks were they not among those who were replaced during the course of the 120 minutes, so who else could have taken a penalty?

Calvert-Lewin remained an unused substitute and certainly would have jumped at the chance of being among the list of five, but the data shows that Sterling’s record from 12 yards is poor.

Jack Grealish missed his only penalty at professional level for Aston Villa when his attempt against Sheffield United in December 2019 slammed against the crossbar.

Saka was tasked with taking his first penalty at senior level but has shown on countless occasions previously he can handle the pressure, so criticising Southgate’s decision to put his faith in the teenager after the event might appear churlish.

Rashford and Sancho have shown themselves to be good penalty-takers at club level. Perhaps the soundest conclusion is that they ought to have been brought on sooner to get a feel of the ball, but Southgate is not the first manager to deploy this tactic, and will not be the last.

I said I wanted to take one!!!!
The gaffer has made so many right decisions through this tournament and he did tonight! But I won’t have people say that I didn’t want to take a peno when I said I will… https://t.co/3mBpKyMoUV

Jack Grealish has hit out at claims he avoided stepping up to take a penalty after the finger was pointed at some of England’s more senior players who were still on the pitch after 120 minutes and did not take one of the five spot-kicks.

Grealish tweeted on Monday morning: “I said I wanted to take one!!!! The gaffer has made so many right decisions through this tournament and he did tonight!

What is the psychology behind penalties?

“You don’t need me to tell you this, but England have a complicated relationship when it comes to penalties. There’s been a very tough, very traumatic past and we have done a lot of research to document the specifics of this to find out exactly why that’s the case.

“As of this moment, England are probably leading the pack in European football with respect to having the most structured and professional regiment for dealing with this part of the game.”

“Southgate is clearly hurting very much inside and his comments were clearly designed to protect his players. His thought process was based on wanting to keep as many of his perceived specialists on the pitch without leaving the team open to being beaten in extra-time, hence why Sterling and Rashford ended up as wing-backs only in the final few minutes.

“That England very nearly conceded from the one piece of defending they had to negotiate with such a lopsided system backed up why he had left the changes so late. There was a clear strategy but you cannot replicate the conditions of Sunday night at St George’s Park.

“Southgate has made at least one alteration to the England starting XI for 37 consecutive matches, making a total of 200 changes in that time and last staying with the same starting line-up in the 2018 World Cup semi-final.

“England were set up to contain Italy, aware of their strengths, and duly posted their lowest possession in a game at Wembley (34.4 per cent) since November 2016 against Spain.

“Southgate admitted he picked a side based on a tactical problem his opponents posed but after an impressive first half, his forward line were unable to release the pressure on Pickford’s goal. It became increasingly apparent penalties were the only route to victory, but ultimately the best team have won the tournament.

“Southgate’s reign has been one of a series of calculated gambles that have largely paid off, but here his luck ran out.”

England have won just 22 per cent (2/9) of their major tournament shootouts (World Cup/EUROs), the lowest ratio of any European nation to have been involved in three or more.

What the pundits said…

Gary Neville told Sky Sports: “I have been to eight major tournaments and I have been knocked out on penalties five times.

“I have seen it all. I have seen the one where the hero stands up and says, ‘I want to take one,’ when actually, I’m thinking, ‘I don’t really want you to take one!’

“Italy had an absolutely brilliant goalkeeper who was always going to save some of those penalties. He was outstanding.

“You cannot recreate it in training but you can have a comfort about doing it, you can be a better striker of a ball than others. I have got no doubt that Gareth and his staff will have done everything possible to have chosen those five penalty-takers. Those five were planned to stand up.

“Raheem Sterling, if we are honest, is not a great striker of a football. His finishing can be quite scruffy. Jack Grealish has not taken a penalty for his club in two years and there will be a reason for that.

“The manager will have looked at everything in fine detail – he’s got so much so right but sometimes it just does not work out.”

Roy Keane questioned why Saka took England’s final penalty, telling ITV: “If you’re Sterling or Grealish, you cannot sit there and watch a kid walk up ahead of you, you can’t.

“Gareth might have been thinking he’s going to be six or seven, you can’t sit there. That must be hard to take, you’ve got to go to this young kid and say I’ll step up before you’.”

Jose Mourinho told talkSPORT: “The decision of the penalty takers, I think it is hard to leave Saka as the last one. I think it is hard for a kid to have everything on his shoulders at that moment. I just feel very sorry for him.

“In this situation where was Sterling, where was Stones, where was Shaw? I feel that Gareth is such an honest guy. Such a protective coach of his players. I don’t think he would ever say players were not ready [to take a penalty].”

Alan Shearer told the BBC: “You are under enough pressure anyway as a player but the extra pressure you have put on those individuals when you’ve had no feel of the football, not involved in the game at all and then you are put in that situation. It’s a big, big ask.

“I just feel for Rashford, Sancho and Saka. It’s a lot for those young boys to take on in the future and it’s so, so cruel. When you have not played a huge part in the tournament, or the game, then to come on and be asked for a minute. Mentally in that situation you have got to get yourself right.

Rio Ferdinand told the BBC: “[Making late subs for penalties] has happened for years. People have put players on. Maybe not as late but towards the end – the last five, four, three minutes.

“Players come on this pitch and they go on as penalty takers because they are recognised. Rashford is a recognised penalty taker for Man United. This happens.

“We look down the years in tournament football and it’s the biggest players, the best players in the world at times miss penalties. These are young kids. They have got to look at that. Big players in the past, (Roberto) Baggio’s etc have missed big penalties.”

Was Southgate right with his spot-kick selections?

Reading on skysports.com? Join the debate below…

Heartbreak for England, but glass is half full | Euro 2020 final review

It was penalty shootout heartbreak again for England and Gareth Southgate in a crushing Euro 2020 final defeat to Italy.

Alice Piper is joined by Pete Smith and Gerard Brand to reflect on a dramatic Euro 2020 final, with England unable to mark their progress with the silverware.