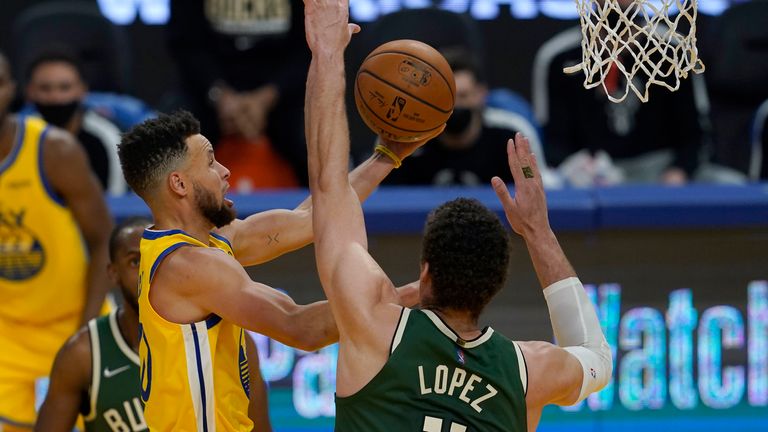 Steph Curry is already the greatest Golden State Warrior of all time. That much isn’t in doubt. But on Monday night against the visiting Denver Nuggets, he has the chance to leapfrog the legendary Wilt Chamberlain and become the player with the most points in the franchise’s history.

Even without his backcourt partner Klay Thompson, Curry has been having an incredible season for the Warriors. The point guard is averaging a stat line on par with his unanimous MVP season and over the course of his last five games, he has averaged 37 points, seven rebounds and four assists, whilst shooting 43% from deep.

In fact, Golden State’s point guard is once again leading the league in three-pointers made with 214, his eighth season with over 200 threes, the most in NBA history (one more than teammate Thompson).

He is an offense unto himself and on Monday night, he will need just 18 points to overtake Wilt Chamberlain and become the highest point-scorer in Warriors history. As it stands, Curry sits at 17,765, with Chamberlain a nudge ahead on 17,783,

“That’s surreal, to be honest,” Curry said of potentially surpassing the achievement of another NBA legend.

“It’s pretty crazy. To know where it started out and all that’s happened over the course of the career – that is a pretty significant milestone that, God willing, when it happens, I will appreciate that moment.”

As Curry is averaging 30 points per contest for the season, second only to Washington Wizards’ shooting guard Bradley Beal, it’s likely he won’t need two bites at the cherry to achieve the landmark.

Whilst Wilt Chamberlain is perhaps better known for his accomplishments with the Philadelphia 76ers and Los Angeles Lakers, he was first drafted and signed by the Philadelphia Warriors, before they were relocated to become the San Francisco Warriors in 1962 by owner Franklin Mieuli.

Indeed, it was as a Philadelphia Warrior that Chamberlain achieved his famous 100-point game against the New York Knicks in 1962, a single-game scoring record that still stands today, with Kobe Bryant’s 81 points against the Toronto Raptors in 2006 the closest anyone has ever come.

In contrast, Curry has spent his entire career to date with the franchise, amassing 744 appearances – the third most in Golden State’s history behind only Nate Thurmond (757) and Chris Mullin (807).

Given the news that their promising rookie center James Wiseman is likely out for the season with a meniscus tear in his right knee, it’s difficult to envisage Golden State achieving much more than a Play-In Tournament spot by the end of the regular season.

They currently sit in 10th in the Western Conference – just creeping in as it stands – but with the New Orleans Pelicans and Point Zion only a game behind. They might not even make the play-offs, despite everything Curry is doing on the court.

Whatever happens, the Warriors won’t be contending for a title this year given the other big guns in the West. Until Klay Thompson returns, this is just another season of Steph being the most fun basketball player on the planet, free from any grand championship expectations, making history as he goes. Let’s soak it in while we can.