‘Come on Mum!’ – What next for Gold Cup winners Cheveley Park? 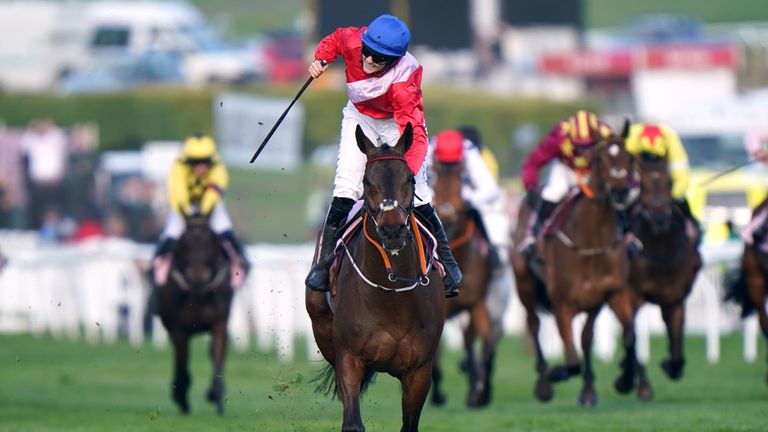 Gold Cup-winning owners Cheveley Park Stud will hold talks about the future of their National Hunt operation after fulfilling a long-term dream with A Plus Tard’s victory in the Cheltenham Festival showpiece on Friday.

The Newmarket-based operation, built by Patricia Thompson and her late husband David in 1975, has predominantly focused on its breeding and racing of Flat horses, producing a long line of successful stallions and mares including this year’s 1000 Guineas favourite Inspiral.

The stud have also branched out into the National Hunt arena, following an ambition of David and son Richard – now the stud’s director – and spent big money to purchase of crop of jumps horses, including A Plus Tard.

However, with the stud now less active at National Hunt sales, there are concerns among fans of the famous red, white and blue colours that their jumps operation could disappear.

Speaking to Sky Sports Racing, Richard Thompson said: “I’ll have to talk to my mum. She is very much the boss and I like to think I’m a supportive wingman.

“To have the experience of winning the Gold Cup is special for her.

“Our flat operation, which is breeding and racing, is very much a business as well as a passion, whereas the jump racing is more of a passion and a hobby. I can’t speak longer term but my Mum is in charge.

“We paid a lot of money for these horses when Dad was in the mood to up the ante. We were paying £200,000 plus, in some cases £500,000, and that level you’re paying for a hobby and couldn’t expect to receive any of the money back.

“You can’t buy moments like Friday. Winning a Cheltenham Gold Cup is absolutely one of those dreams. You can’t put a price on it.” Richard Thompson, director of Gold Cup-winning owners Cheveley Park Stud, says A Plus Tard’s victory was a dream of his late father, describing the day as ‘absolutely astonishing’

Sky Sports Racing’s Matt Chapman made an impassioned plea to the Thompsons on the Racing Debate, saying: “Sit her [Patricia Thompson] down and have a word that night after the 1000 Guineas. I don’t want to see these horses go from the jumping scene.”

Turning to face the camera to address Patricia as she watched from home, Chapman said: “Come on Patricia, get the chequebook out!”

Richard joined in, adding: “Come on Mum, let’s do it!”

Reflecting on A Plus Tard’s runaway victory under Rachael Blackmore, who became the first female-winning rider of the race, Thompson said: “It was just an incredible experience and hard to put into words. You think about winning the Gold Cup for years and then suddenly you’re in with a shout. It’s absolutely astonishing.

“You’ve got to go back to the mid-80’s when my father [David] stepped into the market occasionally to buy the odd National Hunt horse. There’s always been this dream to win the big jump races.

“Over the years my Dad and I would watch Cheltenham together and always talk about trying to win the Gold Cup.

“Although we’d never made a concerted effort to do it, in 2018 he and the team decided to buy a bunch of younger horses, of which A Plus Tard was one of the very first.”

What next for A Plus Tard, Allaho and Sir Gerhard? Gold Cup winner A Plus Tard will take the same route back to next year’s Cheltenham Festival, while Allaho could head for the 2022 King George, according to Cheveley Park Stud director Richard Thompson

Thompson revealed that Henry de Bromhead’s star is likely to repeat his route to next year’s Gold Cup.

The eight-year-old began the season with victory in the Betfair Chase at Haydock in November before being narrowly beaten by Gavlin in the Savills Chase at Leopardstown the following month.

“After the Gold Cup last year when he finished second, Chris Richardson [Cheveley Park managing director], myself and Henry decided not to run him at Aintree and to go to the Betfair Chase, Savills Chase and straight to the Gold Cup.

“That was the ambition and absolutely we’ll do the same again.”

The Willie Mullins-trained eight-year-old has dominated the two-mile-and-five-furlong division, winning his last five starts over the trip, but Thompson is not ruling out stepping up for the three-mile test.

“I think it is a possibility,” Thompson said. “We’ll listen to Willie when it comes to the crunch in terms of what he believes. We know that Willie is the master.

“We discussed it last year at the end of 2021 but he had a hard race in the John Durkan in early December so there was no way were going to run him in the King George after that.

“The Ryanair doesn’t have it [same prestige as a Gold Cup] but he’s so dominant and to have a champion middle distance chaser is still a great family.”

Mullins also faces a decision on whether send Ballymore Novices’ Hurdle winner Sir Gerhard over fences next season or aim for a potential Champion Hurdle bid.

“My gut feeling from Willie is he’s more of a Champion Hurdle prospect,” Thompson said.

“To even be at the top table is a brilliant journey.”