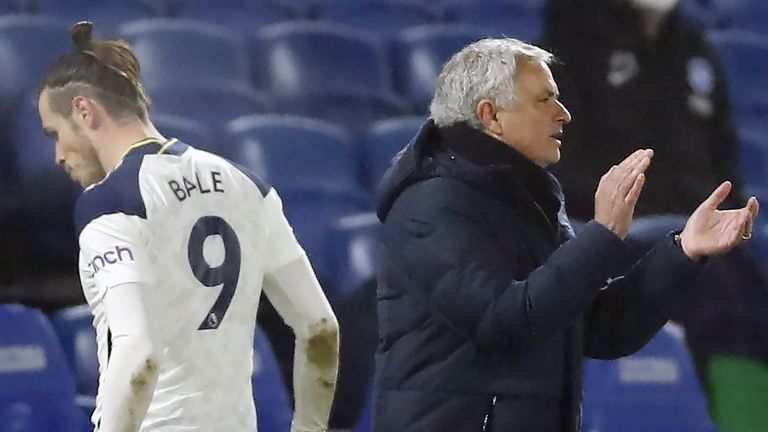 Former Wales manager Chris Coleman has warned against writing off Gareth Bale despite his struggles at Tottenham this season.

Bale, 31, rejoined Spurs on a season-long loan from Real Madrid in the summer but has been a peripheral figure under Jose Mourinho, playing 231 minutes in the Premier League.

Coleman, his manager with the Wales national team between 2012 and 2017, feels Bale is struggling to get into rhythm due to his lack of consistent playing time but still expects the forward to bounce back.

“He’s been out for a long time and he’s finding it hard to get back in and get his rhythm,” Coleman said on Monday Night Football.

“We all know what a world-class player he is. He can win a game, he can score a goal from nothing, he’s got a last pass.

“But when I’m watching him now it looks like he’s always on his first game back after an injury. Obviously, we expected him to be in the flow of it by now but he clearly isn’t.

“He’s only 31 so I wouldn’t write him off. I don’t know what’s happened at Tottenham but knowing Gareth, he’s a very serious boy about his football and he loves playing football.

“I’ve heard comments that maybe he’ll be happy to be on the bench. He won’t be happy on the bench – not the Gareth Bale that I know.

“He will very much want to be in the heart of it and if he’s not quite there yet, he’s either not ready physically or maybe mentally there’s a lack of confidence.”

Bale, who fell out of favour at Real Madrid before his return to Spurs, has been accused of lacking desire by some but Coleman has no doubts about his professionalism and determination.

Coleman said: “Whatever game plan I had, he would want to know about that. We would have meetings and he was very vocal. He would like to understand what the plan was and what everybody’s role was.

“I can’t talk about what he’s like at Madrid or Tottenham, I can only say what he was like with Wales and as a person.

“He’s really serious about his football and he doesn’t want to be treated any differently. He was right in the middle of it with everybody. Even when he wasn’t fit, he was there, in amongst it.”

Asked if Bale is a player who needs an arm around the shoulder from his manager, Coleman said: “I think most players need love.

“Maybe it is a confidence thing. You have to remember the Premier League is tougher than La Liga, week-in, week-out. The intensity is different, the physicality is different.

“Maybe he hasn’t found that yet. Maybe if he had two, three or four games, we would see something different.

“But he’s not getting that because he’s obviously not back at the level where we expected him to be.”