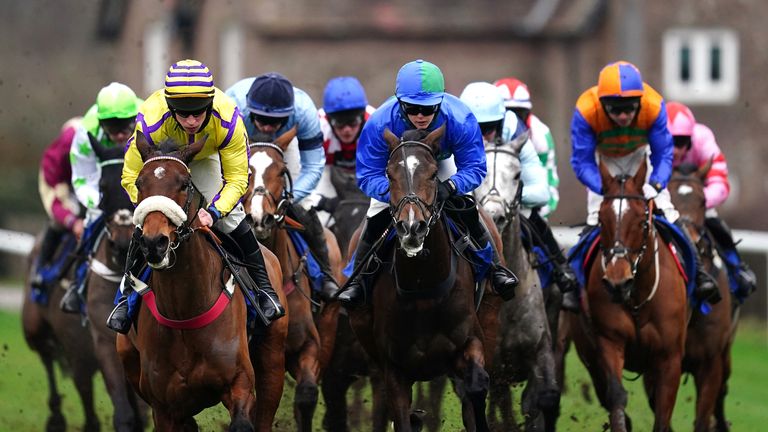 Sky Sports Racing is the only place to watch all the action on the English side of the Irish Sea on Monday, with jumping from Hereford and Fontwell, plus evening Flat action from Wolverhampton.

Only three go to post in the Go Racing With Vickers.Bet Novices’ Limited Handicap Chase (2.40) but you can make a case for each of them in what looks a wide-open feature.

Top weight City Chief clearly has plenty of ability, with two victories last spring and a very good effort at the Punchestown Festival in a valuable handicap.

Trainer Nicky Henderson will have hoped that a switch to fences would bring out further improvement for the Soldier Of Fortune gelding but his jumping was disappointing at Exeter last time on chase debut, when finishing a long way behind the talented Gelino Bello in a match race.

Coconut Splash has far more experience over the larger obstacles but he has yet to get his head in front in eight starts.

He was last seen pulling up in a hot handicap at Cheltenham and this event is far calmer waters for the horse who represents the in-form Evan Williams team.

Dan Skelton’s Jet Plane is the only horse in this contest who has manged to win a race over fences. He was a dominant winner over course and distance two starts ago but was disappointing last time out after the handicapper burdened him with a 14lb rise in the weights.

At £130,000, Pay The Pilot would be one of the more expensive purchases in the Kim Bailey yard but the six-year-old has only run once for the team, winning a three-runner novice hurdle at Ffos Las in good style last March.

The son of Telescope starts this season off an opening handicap mark of 110, which could prove to vastly underestimate his talents.

He faces nine rivals in the Download The Vickers.Bet App Handicap Hurdle (4.10), with the main challenge appearing to come from Nigel Twiston-Davies’ course and distance winner Ballycamus.

After sending out four winners on another memorable weekend for his team, trainer Dan Skelton will hope to continue his fine run of form with Uttoxeter winner Missed Tee in the Cazoo Novices’ Handicap Hurdle (1.40).

Chris Gordon’s Coolvalla is fast becoming a Fontwell favourite and will be hot favourite for the Vickers.Bet Independent Family Owned Bookmaker Handicap Chase (2.30) as the seven-year-old seeks a third victory in as many months over this three-mile-and-two-furlong trip.

His jumping was very impressive on his last start and on paper he looks like the one to beat despite an 11lb hike in the weights.

His main rival looks to be Echo Watt who represents Richard Hobson and Jonjo O’Neill Jr. The nine-year-old has been a model of consistency recently and he gets weight from the entire field.

The Class 2 Huge Daily Boosts Only At Betuk Handicap (6.00) headlines the evening action from Wolverhampton and despite only 7 runners going to post this looks like a wide-open affair.

Barenboim has won three of his last four starts and comes here looking to secure a hat-trick. This a first crack at this level for David O’Meara’s gelding but he has earnt his place in this field and brings a level of consistency that others don’t possess.

Gay Kelleway and Saffie Osborne have been in good form in January and they team up with bottom weight Mukha Magic who won well at Lingfield nine days ago.

Former Northumberland Plate and multiple Listed winner Withhold would be a popular winner for Trevor Whelan and Roger Charlton but his last win was in August 2020.

Watch every race from Hereford, Fontwell and Wolverhampton live on Sky Sports Racing on Monday, January 16.