Chelsea made to wait for Champions League qualification by Real Madrid 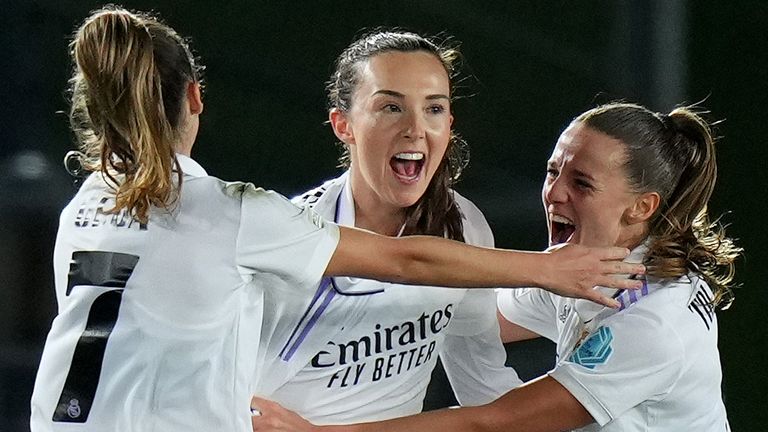 Chelsea were made to wait for qualification to the Champions League knockout stages after drawing 1-1 with Real Madrid.

The Blues knew a victory would secure their place in the quarter-finals with two games to spare in Group A but they fell behind before half-time when goalkeeper Ann-Katrin Berger, trying to play out from the back, gave the ball straight to Caroline Weir and the midfielder slotted home from the edge of the box.

Chelsea should have already been ahead and on course for their 12th consecutive victory after Sam Kerr hit the crossbar in just the second minute with a close-range effort and then struck a post.

But Chelsea’s luck in front of goal changed when Guro Reiten, who was brought down in the penalty area by Ivana in the second half, sent a spot-kick off a post which rebounded off the back of goalkeeper Misa and into the net.

A tale of two goalkeepers

Fresh from scoring eight past Leicester last weekend, Chelsea should have made the perfect start when the ball fell kindly for Kerr in the six-yard box at a corner, but the striker powered a shot onto the crossbar and over.

Kerr had an unusually difficult night in front of goal, striking the woodwork again with a low effort after Lauren James played her through on goal in the area.

Real Madrid, second in Liga F, soon made the Blues pay by capitalising on an uncharacteristic mistake from Berger as Weir swept the ball home into an unguarded net.

Emma Hayes brought on Fran Kirby and Niamh Charles for Magdalena Eriksson and Jessie Fleming at the break although Chelsea only marginally improved in the second period. They fortuitously levelled just before the hour mark after Reiten’s penalty struck the left post and deflected in off Misa.

Berger went some way to redeeming her earlier error by denying Olga Carmona with a terrific save late on while up the other end Misa stopped Kerr from scoring a last-minute winner, producing an equally good stop when one-on-one.

What’s next for Chelsea?

Chelsea‘s next Champions League match is at Vllaznia on Friday December 16; kick-off is 5.45pm. Their final Group A fixture against PSG will be held at Stamford Bridge on Thursday December 22 with an 8pm kick-off. The knockout phase begins on March 21 with the quarter-finals and ends with the final on June 4 2023 at the Philips Stadion in Eindhoven, Netherlands. The draw for the quarter-finals will be held on January 20.

Before then, Chelsea will aim to remain at the top of the WSL when they host Reading at Kingsmeadow on Sunday, live on Sky Sports. Kick-off is at 6.45pm.