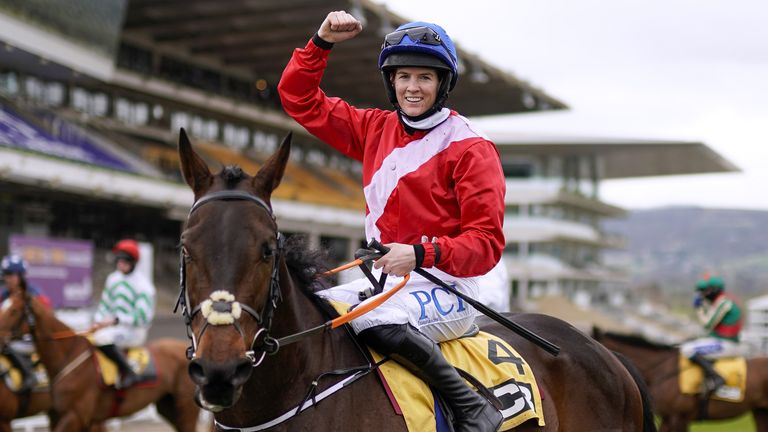 Rachael Blackmore notched a remarkable sixth winner of the week as Quilixios claimed the JCB Triumph Hurdle, the opening event on the final day of the Cheltenham Festival.

Trained by Henry de Bromhead, who is also enjoying an excellent week in the Cotswolds, Quilixios (2-1) was prominent throughout, settling on the heels of the pace-setting Talking About You before moving to the front two flights from home.

Adagio, representing the home team for David Pipe, tried his best to reel in Quilixios up the hill, but Blackmore’s mount galloped all the way to the line, with 20-1 shot Haut En Couleurs in third.

Favourite Zanahiyr and leading British hope Tritonic both failed to sparkle in the Grade One heat.

Quilixios only joined the Henry De Bromhead yard at the start of the month having previously been trained by the suspended Gordon Elliott, and Rachael Blackmore paid tribute to the horse’s former team.

She told ITV Racing: “It’s incredible. Henry’s only had this horse a short time, so all the work went into him at Cullentra stables, so it’s thanks to their work, really.

“Henry just had to get him here on the boat, so big thanks to all them. He’s a smashing horse. And thanks to Cheveley Park for putting me up, it’s brilliant.

Blackmore admitted her parents are thoroughly enjoying her exploits at home in Ireland.

She added: “They’re getting a great kick out of it, so it’s brilliant. I know they’d have loved to have been here today, like a lot of people. I’m just happy I’m here and these horses are here.”