Benn: How much does Kelly want it? 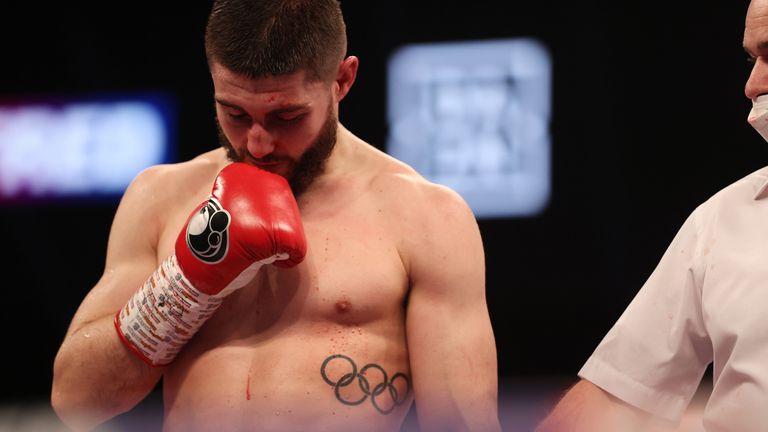 Conor Benn: “He will come back, but he has to sit down and question how much he wants it.” The Sunderland fighter was stopped by David Avanesyan in the sixth round of their European welterweight title fight

Conor Benn says Josh Kelly must question his desire after suddenly wilting to a sixth-round stoppage loss to David Avanesyan in their European title fight.

The Sunderland welterweight suffered the first defeat of his professional career as Avanesyan floored Kelly twice to force his trainer Adam Booth to throw in the towel at The SSE Arena in Wembley.

Benn had been lined up as a future opponent for Kelly, but was unsure whether his British rival will remain in the same division after this loss.

“Kelly was looking sharp, he was accurate,” said Benn, who was part of the Sky Sports team.

“He landed some great power shots early on. I thought Avanesyan might be in trouble, but Avanesyan got to him.

“Kelly has got all the skill. He is naturally gifted. Why does he keep blowing up after four or five rounds?

“Maybe it is a weight issue, maybe he should move up a weight, because I like Kelly, I do. I’m gutted for him, to be honest, I really am.”

Benn admitted that Kelly could not withstand Avanesyan’s assault, although he still backed the 26-year-old to revive his career.

“Everybody knows Kelly is good for four, five, six, but when it gets past that and it gets on top of him, he folds,” said Benn.

“He will come back. He’s just got to sit down and question how much he wants it.”

“Sometimes you come across a guy that will not be denied, that’s too strong,” said Hearn. “That has the will beyond others, and tonight that was David Avanesyan.

“Josh Kelly had a wonderful camp. Josh Kelly was in the shape of his life. Josh Kelly couldn’t have been better in that ring tonight, but this man, he wouldn’t be denied. He was too tough.

“As good as the start was, you could see him unravelling.

“I thought Adam Booth did a great job throwing in the towel, because it was the end.”

The Russian had challenged unsuccessfully for a WBA belt in the past, but Hearn suggested that Avanesyan should earn another fight against one of the biggest names at 147lbs

“I believe he should get a world title shot,” said Hearn. “Why not see him up there fighting the likes of Shawn Porter.

“Terence Crawford looks for an opponent all the time. Errol Spence, Danny Garcia. All these guys.”