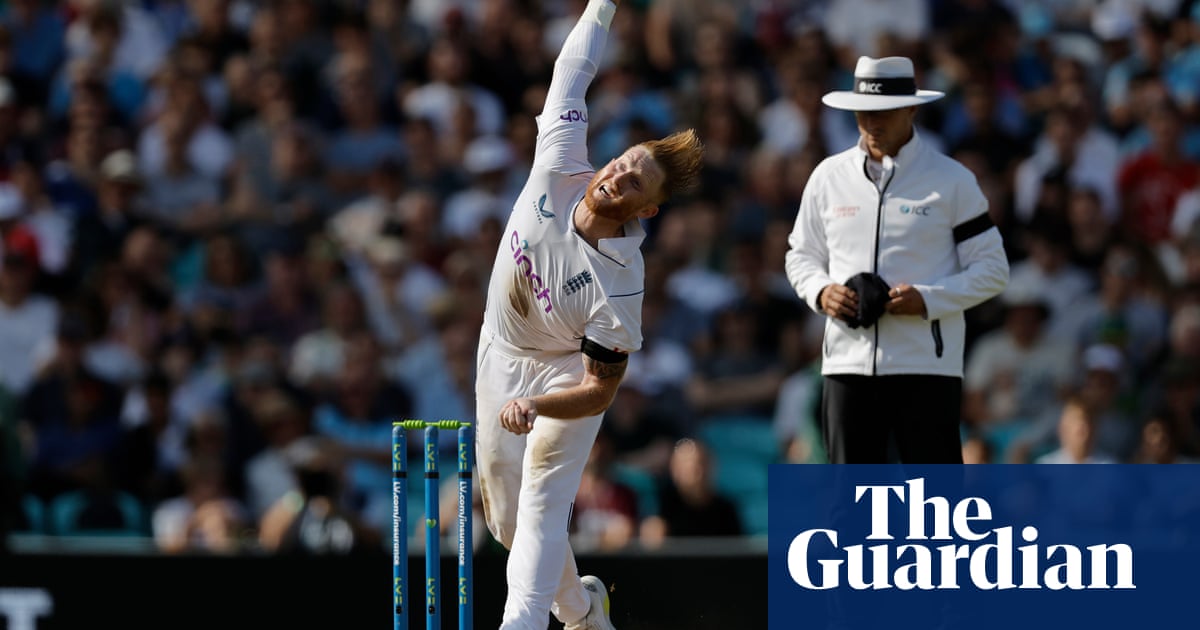 This was a day of hard, thirsty, sinew-straining graft at the Oval, and not just for that significant part of the crowd that offered its own celebration of the life of Queen Elizabeth II by drinking itself into a state of stumbling oblivion under a sallow September sun. We all grieve in our separate ways.

But it was also a grinding day of Test cricket in the middle. Not a great day or a high-calibre day, or a day to shift the sense of two scratchy, strung-out teams playing a kind of fever cricket.

But this was if not Proper cricket, then semi-Proper cricket, as England bowled hard and dry through an extended afternoon session, finding resistance in South Africa’s middle order, before pushing back in turn and feeling it buckle.

It seemed significant for England’s team-building ambitions, and indeed for the captain himself, that it should be Ben Stokes who provided the point of difference with the ball.

It is hard to know the realities of Rob Key’s role as “managing director” of England cricket, an agreeably self-important job title that has an element of dress-up, an element of plastic-fireman’s helmet about it.

He seems busy. Strategic bloke chats have been had. A sense of dress-down management chic has percolated about the place. And there is perhaps some drift-down in the way Stokes has evolved as a Test cricketer.

As a pundit Key would often say that a Stokes who bowls is one of the best cricketers in the world, while a Stokes who doesn’t bowl is a decent Test batsman. And Stokes has stepped it up in mid-summer, has begun to bowl with fury and skill, and has found a role, offering variety and a jagged edge in this samey right-arm seam and swing attack.

Who writes his scripts? His documentary team, as it happens, with full content approval and a slick cross-platform media promotion. But Stokes did provide the breakthrough moment here, bowling 8.4 overs off the reel before tea and producing another of those cinematic Spells of Pain.

No doubt this will be the chat once again. Some cricketers play with a smile on their face. Stokes plays with a wince, a rictus. This is his personal mythology now, the twanging fibres, the dying infantryman dynamic, the oddly sensual slow-motion sweat-droplet grimace. But it wasn’t just that. What Stokes did with the old ball was high-craft stuff, swinging it away, jagging it off the seam, all high-pressure lines and constant shifts of wrist-cock and bounce angle.

Marco Jansen may be all angles and limbs, may have taken to batting on this tour in an outsize cream, jumble-sale jumper, but he is also a real talent, not to mention the only element of leverage left in the South African order as tea loomed. Stokes got him with a delicious in-ducker, shaping in from the hand, veering in late in its flight and taking out leg stump, the kind of montage-moment that seems to put a seal on the day.

Odd as it might sound looking at the card, this came at the end of a period of resistance. It would be dishonest to call it high-class Test cricket.

The partnership between Wiaan Mulder and Khaya Zondo was more like an imitation of Test cricket, something half-remembered, a voice through the wall. But there was at least a sense of heat and light here.

South Africa had gone to lunch at 70 for one. Dean Elgar and Keegan Petersen departed soon after. Then came an hour of something else, the Mulder and Zondo line.

Batting is often described in terms of fluency and tone, as something musical. This was more experimental modern jazz, scratchy, nerve-jangling stuff. But it lasted 15 overs and added 25 runs as Jimmy Anderson and Stuart Broad bowled supremely well, making Zondo leap and prod and pirouette, a man wielding a bat made entirely of edges, splices, toe ends. Zondo got off the mark with a nudged single from his 22nd ball. Mulder has played 30 international innings without getting past 36. For both men, undercooked and reaching up to compete at this level, it was an act of will.

With the lead creeping past 80, Robinson got them both. At which point: enter Stokes. He had already Jansen speed-fishing like a champion angler before splaying his stumps, then finished the over after tea by drawing an elegantly considered steer to slip from Kagiso Rabada.

And Stokes the bowler really does seem to be back. He has 15 wickets at 15 against India and South Africa this summer. More to the point he has found a niche, not just as the king of pain, right-arm wince, but the most varied of England’s bowlers. He swings it as much as anyone, bowls cutters and bouncers, offers a wave of physical pressure. Stokes, who is 31, has 192 Test wickets now at 31.5. When he gets to 200 there will only be 15 England bowlers ahead of him on the all-time list, only seven at a better strike rate.

This is genuine all-rounder stuff. The body is holding up with that reduced follow-through, although you worry, vaguely, about referred stress. How far can he go from here?

Broad is five years older, Anderson nine. They led England’s attack towards a likely series-clinching victory on Monday, as they have done all summer. But it was Stokes who wielded the knife in between.