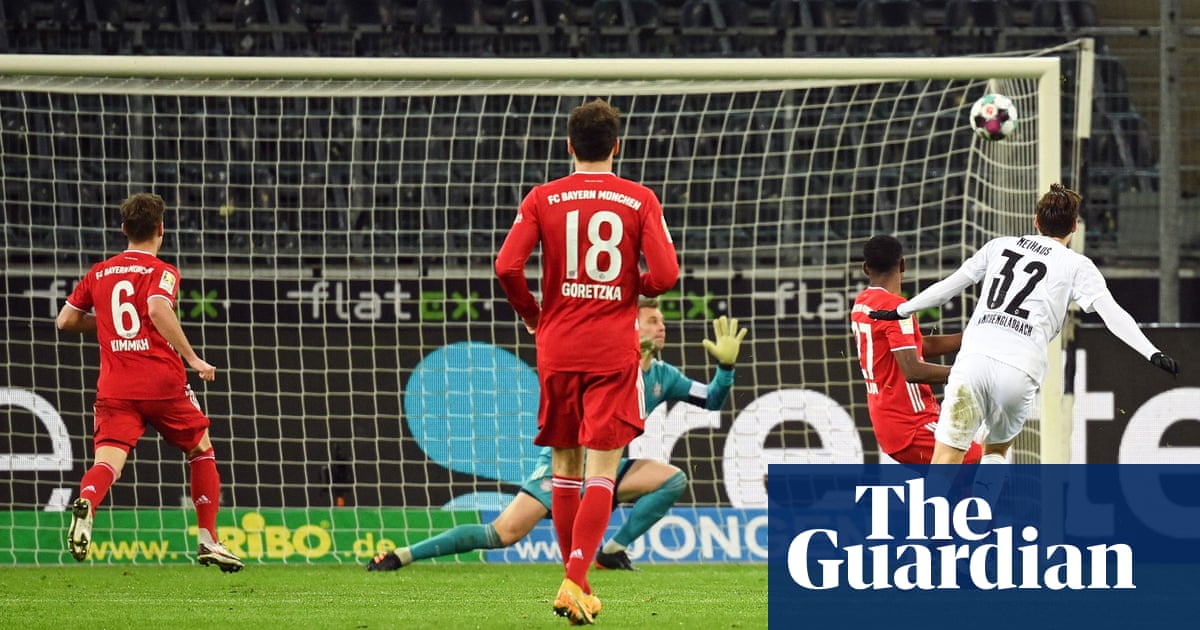 Few would have blamed Marco Rose for being self-congratulatory or even a bit smug. That is not really the Borussia Mönchengladbach coach’s style, so he went for plainly, patiently and concisely explaining his tactical plan that worked to perfection for the benefit of viewers after the match. A plan, by the way, that worked on not just any opponents, but on Bayern Munich.

Any time Bayern stumble it’s a shock, and particularly so in the thus far imperious Hansi Flick era. There are, however, degrees of shocks and if any team was going to not just wrestle the champions to the floor, but pin them down, it was almost certainly going to be Gladbach. After Friday night’s meeting they have now won six and drawn one of their last dozen meetings with Bayern, an unparalleled and quite extraordinary achievement in this reign of bigger-than-ever-before turbo dominance. It was the eighth time Gladbach have beaten Bayern since 2011 overall.

This, however, was that little bit more remarkable. Bayern had rolled ominously into a two-goal lead in a little more than 25 minutes, and we all know how it normally goes from there. Maybe Flick’s team felt a touch of vertigo after going behind in their previous eight Bundesliga matches (none of which they lost, by the way). If that sounds improbable, it is not much more so than the events that unfolded after Leon Goretzka’s firm finish had put Bayern totally in charge.

Florian Neuhaus was the turnaround in microcosm, morphing from villain to hero in some 23 minutes of play either side of half-time. Just as Gladbach are perhaps the Bundesliga neutral’s gourmet restaurant of choice, the 23-year-old is the peak of the connoisseur’s tasting menu; stylish, elegant and dashing. So it was jarring to see him look so ungainly in lurching to concede the penalty from which Robert Lewandowski eventually netted the opener, a penalty that instinctively felt harsh as Harm Osmers needed VAR notification to spot Neuhaus’ handball – “the ball touched no more than two fingertips,” as Rheinische Post’s Jannik Sorgatz and Karsten Kellermann put it – though the midfielder made no excuses, calling it “stupid.”

“I made up my mind not to dwell on it for long, but to just get on with my game,” Neuhaus reflected afterwards with characteristic understatement. After a Jonas Hoffmann double brought the hosts level, it was Neuhaus who scored the winner, hitting a delicious, rising shot around Manuel Neuer from the edge of the area. The craft in the finish made it feel like a nod to the titanic Gladbach-Bayern struggles of the 1970s, an expression of high skill that was necessary to finish a top-class confrontation.

Neuhaus grew up in Bavaria to the west of Munich, the son of a big Bayern fan. He wondered aloud after the game if Neuhaus senior might have privately cursed his son’s winning goal. If he did, he would have done it with a smile.

Lars Stindl, though, had been even more integral to Gladbach’s conquest, arguably having his best-ever season at 32 – and he was key to the coach’s plan. The pre-match idea, Rose explained, had been that Hoffmann, nominally on the left, and second striker Stindl would broadly exchange spaces – Stindl dropping deep, as he does so well, to orchestrate, with Hoffmann’s bursts forward from further back aiming to catch Bayern out. It couldn’t have worked any better, with their combination on the two goals that brought Gladbach level the scheming made flesh. Stindl follows in a tradition of Gladbach forwards, like the legendary Raffael, who like to drop off and find space. It has at least partly informed their great successes over Bayern in recent years.

With some catchup to the top four required, Rose now needs his team not to get carried away. Last season’s early December win for Gladbach in this fixture – back in the days of a full Borussia-Park – was a rousing occasion. It was also followed by a very indifferent spell of form which saw Rose’s men ousted from the top of the table and dumped out of the Europa League.

“We have to find sustainability and defend against every other team just as passionately and just as single-mindedly,” said Rose. Bayern’s defending could do with work too. The last time they conceded this many after 15 games was in 1981-82 – and the figure would be even worse without the excellent Neuer. That said, Flick and company won’t face this Gladbach excellence every week. The question for Rose and his team is if the rest of the Bundesliga can face this Gladbach too.

• The Saturday evening clash between RB Leipzig and Dortmund meant that last season’s top four played each other in this most super of Bundesliga weekends and though the first half struggled to get going in Saxony, the match caught fire after the break . Though a win would have taken Julian Nagelsmann’s men top, it was the visitors who forced the issue. It was, said Emre Can – who made a big difference when he came on for Axel Witsel, who has ruptured an Achilles tendon and whose season is done – a knock-on of Edin Terzic “finding the right words” in the dressing room, and the transformation was remarkable. Two-goal Erling Haaland shone in the 3-1 win but the connection between the Norwegian, Jadon Sancho (who scored the opener) and captain Marco Reus (“I’m my own biggest critic”) was spectacular.

• Perhaps the most spectacular moment of the weekend, however – extraordinarily – was produced by Schalke. Faced with equalling Tasmania Berlin’s worst-ever Bundesliga winless run, they demolished Hoffenheim 4-0 in a stunning second-half exhibition, with unheralded American teenager Matthew Hoppe notching a sublime hat-trick. While academy graduate Mesut Özil lauded “the Kolasinac effect” on Twitter (and coach Christian Gross praised his captain for the day’s “huge personality”), the return to form of Amine Harit, the squad’s most talented player, was pivotal – he set up all three of Hoppe’s goals and scored the other himself. Meanwhile Tasmania exalted on their Facebook page while the captain from that 65-66 season, Hans-Günter Becker, watched the game at Bild’s offices, where he celebrated the maintenance of his side’s record by tucking into a Schalke-branded packet of beef jerky.

• From the Hoffenheim perspective, Sebastian Hoeness received backing from sporting director Alexander Rosen (“absolutely”), but a coach who was the only one to have beaten Bayern until this weekend will be under increased scrutiny now with his team out of form, beset by injuries and only four points above the relegation play-off position.

• Third from bottom is now occupied by Köln, who crashed 5-0 at Freiburg on the back of a shambolic performance. The problems of Markus Gisdol’s side over the last 10 months have largely been obscured by Schalke’s undisputed status as Germany’s crisis club but with Gross’ team making headlines for the right reasons, Köln picked a bad weekend to bottom out. “That was not acceptable,” fumed sporting director Horst Heldt, who pledged that Gisdol will lead the team against Hertha next Saturday at least – a huge game with Bruno Labbadia also under pressure after the Berliners crashed to defeat in the late Sunday game at Arminia Bielefeld.