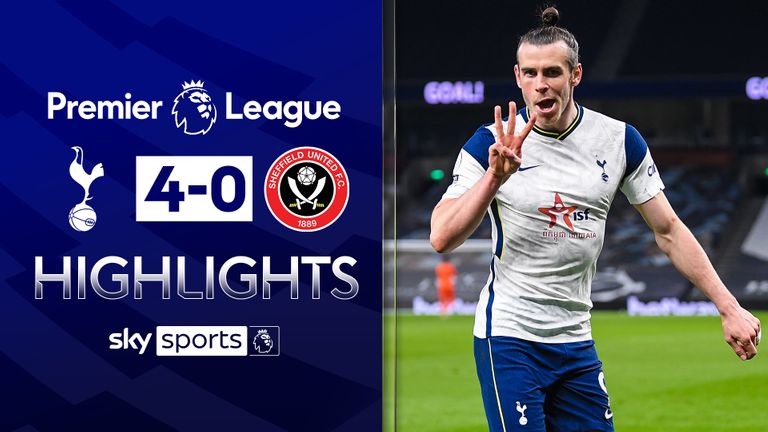 Tottenham kept themselves in the Champions League qualification race, with fourth-placed Chelsea five points ahead of them with four games remaining.

Bale was unplayable and took his Premier League tally to eight goals in the last eight games, but with that must come a sense of what might have been this season.

The Welshman was alarmingly under-used by former boss Jose Mourinho, even when he had regained peak condition, and playing with freedom in a front four with Harry Kane, Heung-Min Son and Dele Alli, Spurs were a constant threat and a far cry from the pragmatic style that dogged Mourinho’s era.

After scoring his first Tottenham hat-trick since 2012, Bale told Sky Sports: “It’s always nice to get another hat-trick and another match ball.

“I remember my last hat-trick – Villa away I think. It was a while ago and it’s nice to get a hat-trick, but more importantly it’s three points for the team and we move on to the next one.

Gareth Bale scored the seventh hat-trick of his club career, three of which have come at Tottenham Hotspur (four for Real Madrid). The Welshman’s other trebles for Spurs came against Aston Villa in December 2012 in the Premier League, and in October 2010 against Inter Milan in the UEFA Champions League.

“It was a great performance by everyone especially Serge [Aurier, who provided two assists]. I said if it was three assists he could have the match ball.

“Winning always makes everyone happy and gives a winning mentality to the dressing room. It’s not going to happen overnight but I feel like we’re taking a step in the right direction.

“Obviously you have to take your chances when they come, and thankfully I had a few tonight. I’m feeling good. As I’ve said before I just needed to play games and get a run of games and I’m doing that now, so I’m happy and when I’m happy I normally play well.

“It was a great performance by the team. From the first whistle I felt we were on the front foot and got control of it and played some good football. I feel like we are taking a step in the right direction and playing more like the Tottenham way.”

Could Bale stay at Spurs?

On Bale’s stylish performance, Tottenham interim boss Ryan Mason said: “I said all along Gareth hasn’t and won’t lose that ability in the final third to produce moments of excellence. He’s a world-class player – he’s proved that over many years. The most pleasing thing about him tonight was his attitude, his running for the team.”

Asked if Bale’s loan spell for Real Madrid could yet be extended, Mason said: “I think that is a discussion once the season is done. Our priority is the next game.”

Mason said he was shocked that Sheffield United’s John Fleck escaped a red card for appearing to stamp on the head of Giovani Lo Celso.

The incident occurred in the second half as Lo Celso fell under challenge from Fleck and the Sheffield United player then raked his boot down the side of the Argentine’s head.

Lo Celso later went off and was seen with a large ice pack attached to his head.

“I am so shocked that it wasn’t a red card,” Mason said. “I’m shocked the VAR team didn’t at least tell the referee to have a look. I think it’s a stonewall red card.

“I don’t think there’s a clearer red card. You see the replay once and he’s endangered an opponent. I cannot believe it wasn’t given as a red card. It’s avoidable.”

Mason himself had to retire from the game after suffering a fractured skull while playing for Hull City in 2017.

The Lo Celso incident did not overshadow a second win in two league games for Mason, who is in charge until the end of the season following Mourinho’s sacking.

Heckingbottom: We need the fans back

Sheffield United have picked up just four points from a possible 51 available away from home this season, losing 15 of their 17 such matches.

Last season, the Blades won more points from their first three away games, losing just six times on their travels in the league.

Paul Heckingbottom has seen his Sheffield United side concede 15 goals in his six Premier League games in charge, and the Blades interim manager was frustrated by his team’s display with only pride left to play for during a disappointing campaign.

“We have to be at our best every week to get a result and we weren’t,” he said. The first half upset me the most. It wasn’t good enough. There’s an anger at that first half. I don’t enjoy watching that. The first goal is so passive. The second is a counter from our corner. The third is a giveaway in a bad area. We can’t afford to give those players those kind of opportunities.

“When we came out in the second half, it was a much better attitude. It’s an attitude and a mentality thing. Between now and the end of the season, it has to be a team that’s willing to fight. It’s taken its toll since the first lockdown and we’ve had a change in personnel. We need the fans back. But how we approach the final four games is important.”

On the Fleck incident, he added: “There’s no place for that on a football pitch but the VAR has looked at it and it’s been deemed accidental and unintentional.”

Tottenham travel to Leeds on Saturday May 8 for a 12.30pm kick-off, while Sheffield United host Crystal Palace on the same day (3pm kick-off). That match is live on Sky Sports Premier League.