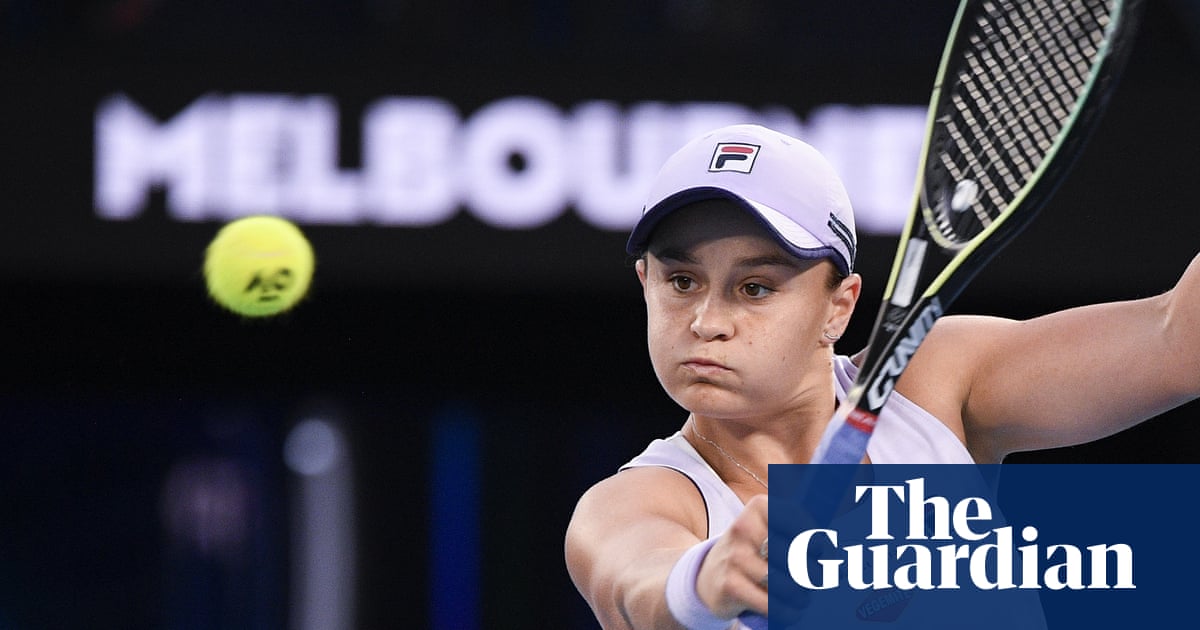 When Ash Barty talks in first-person pronouns, she does so in plurals. “We” is generally the most utilised option in her lexicon.

“I think if you would have told me a few months ago this is the start to the year we’d have, we’d take it with a massive smile on our face,” the world No 1 said after her fourth-round Australian Open win. “We come out, have fun.”

Tennis is, for the most part, an individual sport. Barty’s is the solitary name atop the WTA rankings. But the Australian has never operated alone. The “we” is her team. They are her “family”, some in blood, others in every way but.

That is not only coach Craig Tyzzer, but also mentor Ben Crowe, golfer boyfriend Gary Kissick, and a “certain Englishman” among the small gathering in her box. She explains this “red cherry face” is her new strength and conditioning coach, Mark Taylor.

Barty’s game is hers, but it is also one built on versatility gleaned from elite sporting friendships with surfer Stephanie Gilmour and Richmond Tigers captain Trent Cotchin, among others.

It is such resourcefulness that dispatched the fourth-round challenger Shelby Rogers, in a 6-3, 6-4 result that sets up a quarter-final meeting with Karolina Muchova, the Czech who did a number on Elise Mertens.

Monday night was routine in all ways but one – as cheers from the “crowd” were heard from the TV screen, Barty and Rogers heard nothing.

Rod Laver Arena in a vacuum would have been a nightmare for Nick Kyrgios had the combustible Australian not already done his dash before Victoria’s five-day lockdown began at midnight on Friday. A crowd can make or break a player’s game, lift a qualifier to greatness or fell the best competitor on the planet. Barty, conversely, could play on the moon in identical fashion. Any drop in form or mid-match erraticism is usually only down to internal forces or injury.

Indeed, the only thing she has in common with Kyrgios is that the pair appear in a ubiquitous Uber Eats ad (alongside Sacha Baron Cohen). Her face bears no signs of Kyrgios’s bling and bluster, no features of her fame and fortune. She does not read the papers and does not, as she said before this match, need “that external recognition”.

Quiet consistency is the modus operandi, and Barty does not so much play as conduct surgery. A slice here. An incision there. A steady hand wielding a sedating first serve and a belting backhand that is also precise. Rogers is a less-than-cooperative patient, but in truth had already haemorrhaged by the second game and bled points thereafter like a world No 57 really should against a first seed.

The American, to her great credit, was resilient and gritty, approached the net with a jolt and thrived on a higher bounce. She matched Barty’s ace tally at five apiece. Also evident was a penchant for risky business when on the edge.

With Barty closing in on victory, Rogers saved two match points and inflicted her first break in the very next game. The change was barely perceptible but the scoreline showed 5-1 had become 5-4 and a comeback may yet have been afoot.

Except that Barty had all those tricks and nuances from the “we” in her box. The methodology had been tried and tested before her Covid-19 hiatus, before she was absent for 50 weeks and playing golf while Rogers was playing the 2020 US Open quarter-finals.

It was the many times before this that engineered three match points and a final flourish to wrap it all up. “I knew my serve was going to be massive,” Barty says. “She is a player that can take the match away from you very quickly.”

That late wobble bore the only blemish, and the draw has opened up wonderfully for a run to the final. All the top seeds from her side are gone and there is no other grand slam finalist en route to the decider, with Serena Williams, Naomi Osaka and Simona Halep all at a comfortable distance until that day, should it come.

“We” go again, she tells nobody in the stands, and departs without a fuss.