In the two years and eight months since Mikel Arteta took the reins at Arsenal, there can’t be many Premier League managers that have experienced the backing of their club as strongly or as often as the former Gunners captain.

Arteta has been given the freedom to revamp his squad, with 18 players arriving and the same number leaving on permanent deals since he replaced Unai Emery in the dugout. According to Transfermarkt, only Chelsea have a higher net spend on players than Arsenal since the summer of 2020.

Two of those to leave the club were Mesut Ozil and Pierre-Emerick Aubameyang, former fan favourites on huge contracts that Arteta not only dropped from the squad, but then allowed to leave without a transfer fee, such was his willingness to move them on.

Arteta has also been supported when questions have been asked about his leadership of the team and his lack of managerial experience, particularly when Arsenal began the season with three defeats, no goals scored and nine conceded in their first three matches of the 2021/22 campaign.

But despite the esteem in which Arteta is clearly held in north London, there is one issue on which he was apparently powerless.

“I had no choice!” Arteta claims when asked in an exclusive interview with Sky Sports whether he had any reservations about the recently released documentary charting the club’s 2021/22 season.

The cameras reveal the manager’s thoughts, tactics and team talks to fans and rivals alike, but he said: “If we’re going to do it, we wanted to do it in a natural way that reflected who we are.”

Establishing – or perhaps re-establishing – Arsenal’s identity is something that has been at the core of Arteta’s thinking ever since he took the job in December 2019. The club were still adjusting to life after Arsene Wenger, whose final seasons saw a schism develop between those who continued to back the legendary manager and those who believed he was holding the club back. 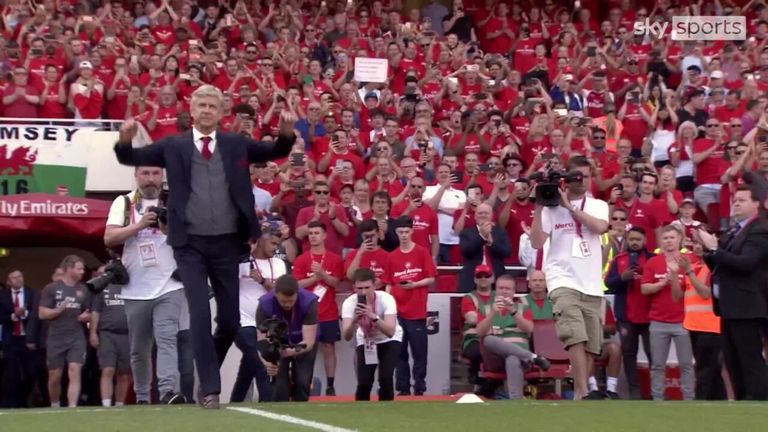 Wenger’s successor Emery lasted just 16 months, while his departure came just weeks after Granit Xhaka had been stripped of the captaincy for clashing with his own supporters during a game against Crystal Palace at the Emirates Stadium.

Throw in the fact that a number of supporters had issues with the Kroenke family – the club’s owners – and it’s fair to say the relationship between Arsenal and their fans was fractured.

“The fulfilment and how you feel when you play in front of your fans, and you feel that energy – it makes everything click and makes people happy, I think.” The hard work is paying off for Arteta, with a combination of that refreshed relationship, Arsenal’s impressive start to the season – they have won their first two Premier League matches after claiming victory in all five of their pre-season fixtures – and five new signings helping to create an atmosphere that hasn’t been experienced at the club for several seasons.

Asked if this is the most optimistic he has felt since taking charge, Arteta admitted: “Probably about the environment, yes.”

The manager is determined not to get too swept up in the optimism swirling around the Emirates, though, and warned his side must maintain their focus for the trip to Bournemouth on Saturday, live on Sky Sports.

“We don’t have to get carried away,” Arteta said. “We’ve played two games and we’re going to have another difficult game tomorrow against Bournemouth.

“You know how tough this league is so there’s still everything to play for – we’ve done nothing and we have to be very conscious of that.”

Arteta was similarly wary of suggestions that Arsenal – whose only meeting with a fellow big-six side before October comes away to Manchester United on September 4, live on Sky Sports – have been handed an opportunity by the fixture schedule to generate some early-season momentum.

“When you see the fixtures and the results in the first two games of the season and you had to bet, I’m sure you would have lost a lot of money!” he said. “That’s not how it is in the Premier League, unfortunately.

“All we need to do is play and perform as well as we possibly can to earn the right to win. It doesn’t matter who we play against.”

Arteta will be hoping to avoid one of those unpredictable results when his side take on newly-promoted Bournemouth. But, while Arsenal have seen off Crystal Palace and Leicester so far this season, remarkably the Gunners haven’t won three consecutive matches to start a Premier League season since the 2004/05 campaign.

FREE TO WATCH: Highlights from Arsenal’s win against Leicester.

“These are stats and they are there for a reason,” said Arteta. “Obviously our aim is to go there and win and we know they are not going to make it easy for us.

“It’s a team that has started the season pretty well – they had a really good win against [Aston] Villa and they’ve been consistently performing for over a year. It will be tough.”

One of Arsenal’s key weapons at the Vitality Stadium is likely to be new signing Gabriel Jesus, who produced two goals and two assists in a remarkable performance on his home debut in the 4-2 victory over Leicester last weekend.

Jesus’ quality on the field isn’t in doubt – he also registered the most league assists for Manchester City last season despite not being a regular starter – but it’s also his off-field attributes that attracted Arteta to the Brazilian forward.

“That’s one of the biggest reasons why we wanted to sign him,” revealed Arteta, who worked with Jesus at the Etihad Stadium during his time as Pep Guardiola’s assistant.

“Obviously we know how he is as a player and what he was going to bring. He’s won everything in the last few years, he knows the standards, what it takes to win.

“Obviously we had to change his role and what he had to do in this football club and now he’s one of the leaders. He’s a natural leader, but he’s also somebody that is prepared and I think is in a stage of his career where he’s able to do what we are demanding him to do.”

Jesus has gone from a Man City squad containing seasoned title winners into the youngest dressing room in the Premier League. However, Arteta says the opportunity to establish himself not just as a regular starter but as a leader was key to Jesus’ decision to move to north London.

“That’s what he needed,” said Arteta. “Obviously he’s played a lot of games in this league in the last few years but not that many as a starter, especially in the last two years.

“He really wants to feel like the player that can make the difference for the team and that’s the next stage.”

Nobody embodies Arsenal’s youthful approach under Arteta more than Martin Odegaard, the 23-year-old Norwegian playmaker who was this summer named as the Gunners’ captain after only 18 months at the club.

While Arteta was reluctant to compare Odegaard to Aubameyang and Alexandre Lacazette, his predecessors as Arsenal captain, the manager was fulsome in his praise for the former Real Madrid prodigy.

“Everything that he’s done in the last 18 months since he joined us,” said Arteta when explaining why Odegaard was handed the armband.

“He’s an exceptional football player that wants to play the way we want to play and he’s so hungry to make this club successful. That’s the reason.”

Odegaard’s hunger to bring the good times back to Arsenal is matched by his manager’s. Arteta led the side to FA Cup glory at the end of his first season but further silverware – as well as a long-awaited return to the Champions League – has remained out of reach.

It’s easy to think a place in the top four come the end of the season would be enough to satisfy Arteta. But while it would certainly represent continued progress under his leadership, the manager has set his sights even higher.

“This club is built on – and it’s history will tell you – that you have to be the best,” he insisted. “That’s the aim that we have everyday.

“You have to win trophies and you have to play every day at your best to make the people that are supporting you proud – that’s the objective.”