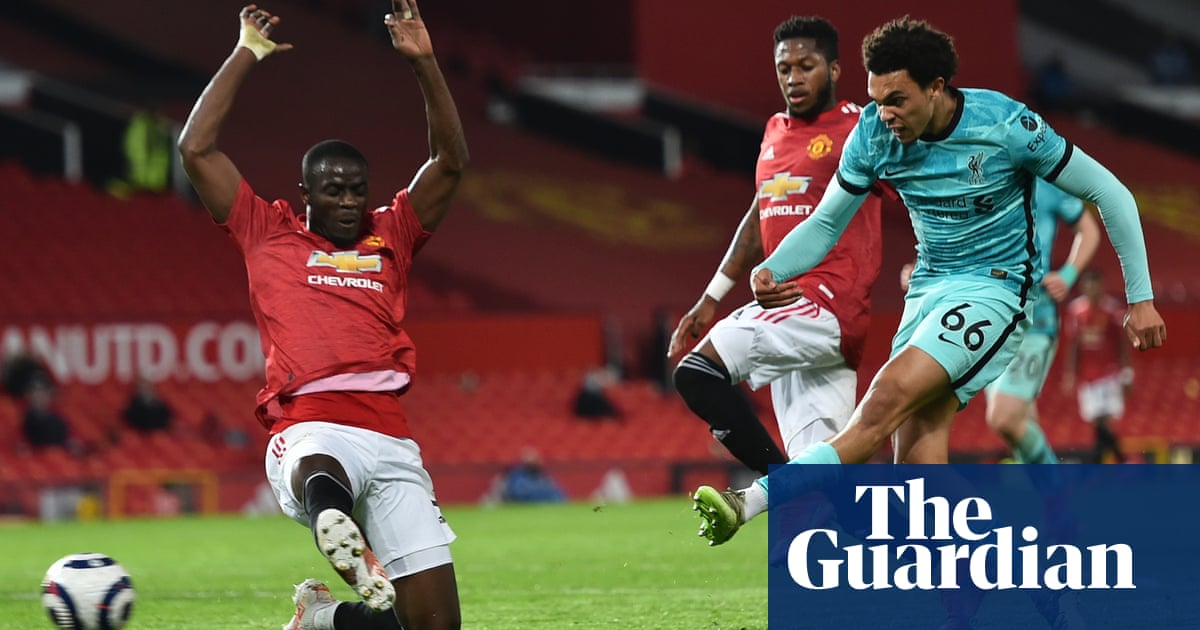 There was a decoy Liverpool bus. That was the one that ended up getting its tyres slashed by Manchester United fans on a side street near Old Trafford.

The real Liverpool bus, unmarked and unheralded, sneaked around the back entrance to avoid the hundreds of protesters out front.

United also operated a couple of dummy buses to shuttle between the hotel and the stadium. The players themselves travelled in their own cars and arrived six hours in advance. On the concourse, riot vans and police horses jostled to keep the crowds at bay. Two arrests were made. Remind me. Why were we doing all this again?

This is, perhaps, the prevailing theme of these past eight months of plague football: the vague sensation that somewhere amid the myriad contortions and unsatisfying compromises, the endless whats and wheres and whens, we mislaid the why. Decoy buses. A Thursday 8.15pm kick‑off to accommodate a fixture postponed because fans stopped it happening. Is this strange? Is this normal? What are we all doing here? Naturally, most of these uncertainties endure. But somehow, in amongst the six goals and the lawless entertainment, a certain logic emerged too.

Liverpool are back in the top‑four race. United are staggering towards the end of the season like a team who have played 58 games on fumes. Harry Maguire is more important than we realised. And after the toughest season of his career, Trent Alexander-Arnold has fought his way through the storm.

Tired legs, tired minds, tired bodies, tired consciences: these have been the motifs of Liverpool’s pandemic, a jumble of barely legible subplots that seems to make less sense the more you look at it. And for all the turbulence and rancour off the pitch, Liverpool have looked painfully tame on it: swallowed up in a deluge of back passes and hopeless crosses, a team trying all the same things in the increasingly forlorn hope that it will all somehow click.

For much of the first half‑hour, this game appeared to be following a similar pattern. United scored, Bruno Fernandes providing the little flick of invention the game desperately needed. Liverpool puffed and puffed and passed and passed. They had a penalty scrubbed off by the VAR. It felt like one of those nights. But out of a scruffy set‑piece situation, Diogo Jota diverted the ball past Dean Henderson with an instinctive flick of the heel. It was a foothold, if nothing else.

Few players have embodied Liverpool’s travails this season as faithfully as Alexander-Arnold. One minute you’re a virtual unknown; the next you’re one of the hottest footballing properties on the planet and the taker of perhaps the most famous corner in history; the next you’ve lost your England place and everyone has basically agreed that you can’t defend. This is a familiar cycle of boom-and-bust, one that has claimed many a talented 22-year-old in the past. But somehow over the last few weeks, something seems to have stirred in him: a fortitude and resilience that we perhaps expected to see, but not necessarily this soon.

And so with half-time looming, Alexander-Arnold stood over a free-kick from the right. There was a little strut as he approached the ball, the little snap of the ankle that generates just that little extra overspin. You didn’t need to be a seasoned Alexander-Arnold watcher to realise that this was a player who was comfortable in his game again. Firmino’s header was brilliant, and in retrospect perhaps that was the moment that Liverpool found their purpose. Oh, hang on. Yes. This was how it was supposed to work. For 90 minutes plus change, Old Trafford was Alexander‑Arnold’s playground.

There was a second assist for Firmino. A scandalous stepover to send Paul Pogba for an ice cream. An unbelievable pass over the top to Sadio Mané. A couple of rakish pops at goal himself. Five key passes. And with Gareth Southgate watching from the stands, a reminder that when he is humming he doesn’t just raise his own game; he raises everyone else’s, too.

So much of the criticism that Alexander-Arnold has received this season has been gauged against standards he himself has set. Let’s take a moment to remember just what a thrilling high-wire act he has created for himself: playmaker, crosser, set-piece-taker, last-ditch defender, inexhaustible engine. This is a role that only a handful of players on the planet can play to even a competent level. Meanwhile, in supposedly one of his worst seasons, he still tops the Liverpool standings for chances created, interceptions, tackles and forward passes.

And as a rampant second half unfolded, there was something else there too: a sense of unbridled relish that seemed to create its own clarity around it. Marcus Rashford galloping clear. Mo Salah scoring an emphatic fourth.

Jürgen Klopp going bananas on the touchline. Scott McTominay dementedly chasing the game like a man who had accidentally got on the decoy bus. And at the heart of it all, Alexander-Arnold: playing like a man who had rediscovered football again. It was good. It was fun. And, you realised: maybe this was the point of it all.