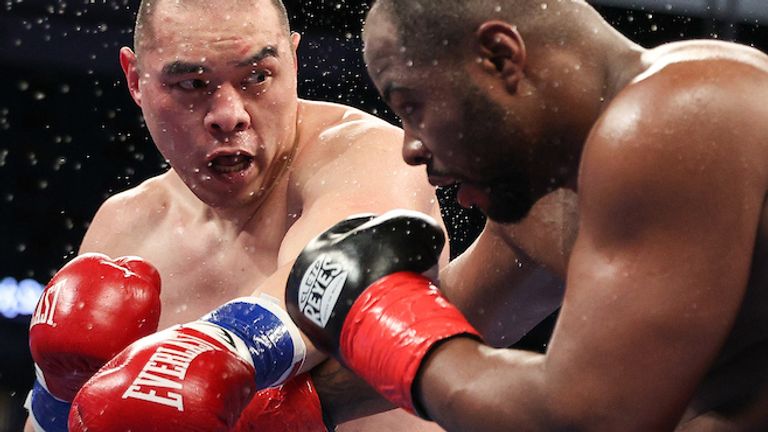 Zhilei Zhang’s hopes of landing a “big name” fight hit a setback after being held to a draw by Jerry Forrest; Zhang scored three knock-downs but was forced to survive the final rounds

Zhilei Zhang was forced to cling on to a desperate draw against Jerry Forrest in a damaging blow to his hopes of a major heavyweight opportunity.

Zhang floored Forrest in each of the first three rounds but ended the 10-round fight exhausted and cut, and forced to settle for a share of the judges’ scorecards.

The undefeated Chinese heavyweight, who lost to eventual gold medallist Joshua at the 2012 Olympics and has sought revenge ever since, was hoping to progress into a “step up” against a “big name”.

Those plans looked on course in the early exchanges when Forrest was knocked down three times.

‘Big Bang’ Zhang’s chopping left hand did the damage in the opening round.

Zhang hurt Forrest in the second then a looping right hook sent him crashing down again.

Then a straight left hand from Zhang had Forrest on the canvas and on the verge of defeat.

But Forrest never stopped ploughing forwards and would eventually be rewarded for his bravery.

He landed his own left hand which hurt the Chinese contender, who was bleeding and tired, in the eighth round.

Zhang was deducted a point for holding in the ninth then was forced to withstand an onslaught from Forrest in the 10th.

Zhang’s potential marketability to a Chinese audience, and a silver medal from the Beijing Olympics, led hopes that he could be a valuable commodity in the heavyweight division.

“We are looking for a step up against a big name,” Zhang’s advisor Terry Lane told Sky Sports before Saturday’s fight.

“We want a name that will draw more attention to Zhang because he doesn’t yet have a big name on his résumé.

“Derek Chisora is the name that I like. Joe Joyce is also a fight that we would love.

“Let me say it like this; there is no name that we are looking to avoid.”