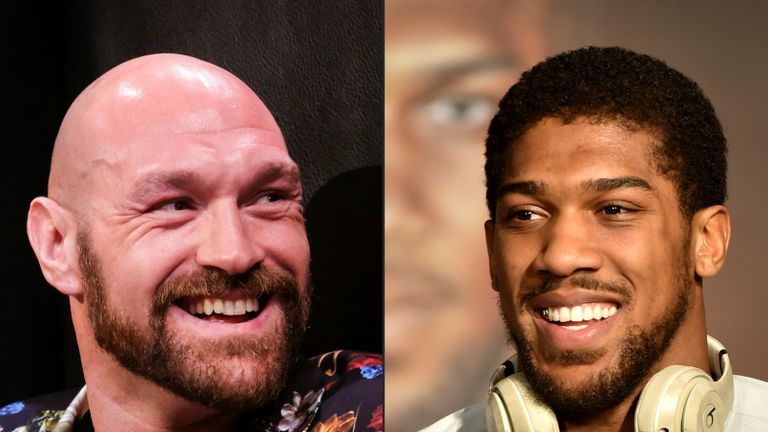 Britain’s rival champions have been considering ‘multiple’ offers to stage their blockbuster battle, with the winner emerging as the sport’s No 1 heavyweight.

Matchroom boss Hearn, who met Fury on Tuesday, is yet to reveal a date and venue, but did confirm that unified champion Joshua and the WBC title holder had reached an agreement over a location.

Hearn told Behind The Gloves: “Both sides have approved the site offer that they want to go with, and now we’re just finalising the site deal and we’re in a great place.

“I saw Tyson yesterday. I just messaged him and said, ‘I’m in Vegas, I’m in your hotel if you fancy a cuppa’.

“We just had five or 10 minutes together and it was good, because I don’t represent Tyson Fury, so I don’t know what is in his mind. What he basically cemented in my mind was, this is the only fight he wants, and I know that’s the same with AJ.

“It just good to say, right we’ve got the offer, we all approve. We’re moving forward now. We’re good.

“It has been agreed by both sides, the option that we will take, and you’ll get the date very soon and the official announcement.”

Saudi Arabia, America, China, Qatar, Singapore, Dubai and Britain have all been in the running to host Joshua vs Fury, which Hearn insists will go ahead this summer.

“One hundred per cent,” he said. “That’s the thing. Everybody wants this fight as soon as possible.

“There is no option for this fight to go at the back end of the year, and I’ve made that clear. The hardest thing about securing the site is in this world we live in today, most people would like to kick it to November, December. That’s not available. It was never available.

“What was available was a summer fight for the undisputed world heavyweight championship. That is what you’re going to get. Both guys want two fights this year. One will be in the summer and one will be in December.”